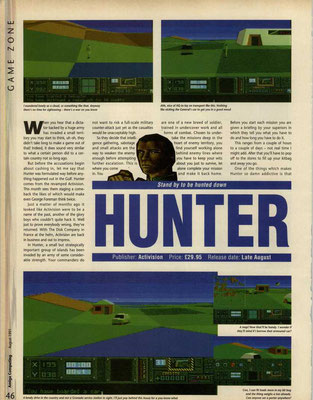 Trivia:
1) The combination of the game's 3D graphics and sandbox-type gameplay has been subsequently compared to the Grand Theft Auto 3 (2001) and similar sandbox games, such as Far Cry 2 (2008).
2) Hunter features a rather sophisticated AI for its time. In addition to shooting, enemy soldiers can also drive vehicles and track the player down. Guard towers, tracer guns, cannons and SAM launchers have the ability to shoot towards the player, and homing missiles launched by the enemy accurately follow the player's vehicles. Birds can also flock around the player, which can cause them to get killed by a vehicle.

3) Reviews snippets- "Regardless of which mission you are on there are no restrictions, apart from time, over how you do it. You can use whatever transport or equipment you like. This sense of freedom allows exploration and experimentation over transport and equipment mixes. Although the missions have time-limits there are no constraints as to how you must complete them, and this flexibility is severely lacking in past attempts at accessible 3D games." "I loved the idea of controlling your character with freedom to travel around the various locations, using the various means of transport and going into buildings without so much as a "by your leave."

Amiga Power magazine - "Hunter is a real all-rounder. There's something for everyone in there, all wrapped up in a believable 3D world you can get lost in for hours"

4) Open world is a term for video games where a player can move freely through a virtual world and is given considerable freedom in choosing how or when to approach objectives, as opposed to other computer games that have a more linear structure. Open world and free-roaming suggest the absence of artificial barriers, in contrast to the invisible walls and loading screens that are common in linear level designs. Generally, open world games still enforce many restrictions in the game environment, either because of absolute technical limitations or in-game limitations (such as locked areas) imposed by a game's linearity.