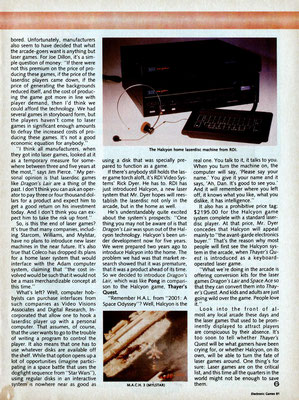 2) The game was fully animated like Dragon's Lair, but required more than simply choosing when to fight or which way to dodge in accordance with the animation. Instead the player had full control over Thayer's movement to different areas and was required to find and use a variety of magical objects to overcome enemies and obstacles like in most later graphic adventure games.
3) The RDI'S Computer voice will sometimes give you hints, your score and when you lose a life in certain scenarios, such as if you chose a path that led to your death.
4) Arcade (with limited voice recognition at the beginning of the game) and home versions built at the same time, bur arcade version released earlier.

5) The animation for this video game was never fully completed when it was first released  in 1984. In the game Thayer  was to explore five kingdoms but only three were ever finished. Years later the game was re-titled Kingdoms and was released as a home computer video game that included the missing final two kingdoms.

7) Game is not emulated (only arcade version is emulated in Daphne emulator).