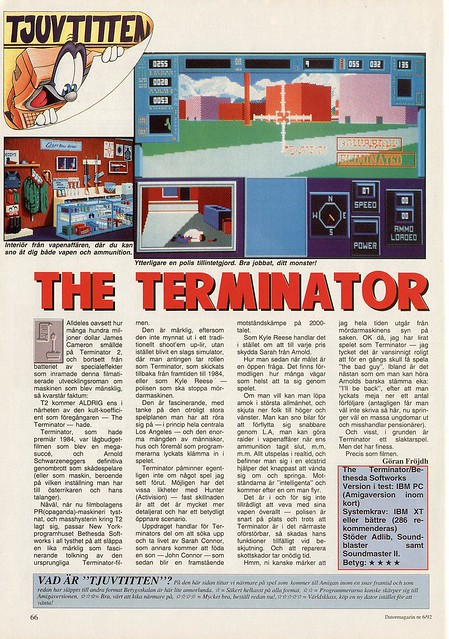 First english review - Computer Gaming World (CGW) (1991)
"Overall, the designers of The Terminator have done a commendable job of capturing the thrilling spirit of the original movie, while allowing players enough freedom to create their own version of the story. The non-stop action of the movie has been distilled down into a classic chase game that has all the elements necessary for

1) First video game based on the Terminator film series.
2) Made by Bethesda company, that later will make semi-open world games Elder Scrolls part 1 and 2.
3) Game was written in 100% assembly and takes up more than 35000 lines. The game contains approximately 20000 3D objects. It was developed using Turbo Assembler and Turbo Debugger with all debugging being done remotely. It was created on a variety of 286 and 386 computers. All graphics were created on IBMs and Amigas using DPIII and DA. More than 700 frames of animations were created. The delta mode compression yielded a 100-to-1 ratio.
4) The game takes place within a huge (roughly 10 - 6 miles or 16 - 10 kilometres) 3-D rendered area of central Los Angeles. Though the buildings and their placement within the world is generic, and highways/overpasses have been removed, the streets and their layout are largely accurate. The game also includes some landmarks, such as Dodger Stadium, Griffith Park, and the Silver Lake Reservoir.
5) Released after sucess of Terminator 2 movie.

8) First person game when you can shoot and drive a car over people.

11) The size of the map of open world games let to creation of additional genre called "Battle Royale". First such game called "Battle Royale mod" appeared in 2013 as a mod for 2012 game "DayZ" (funny that this game was a mod too - for  a game "Arma 2" (2009). Mod was directly inspired by japanese "Battle Royale" movie from 2000. Creation of different mods for a game led to PUBG standalone game release in 2017.