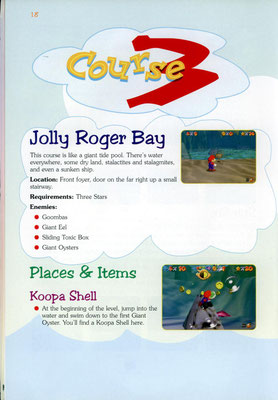 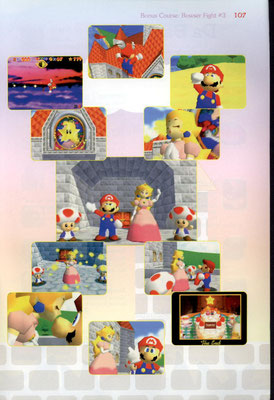 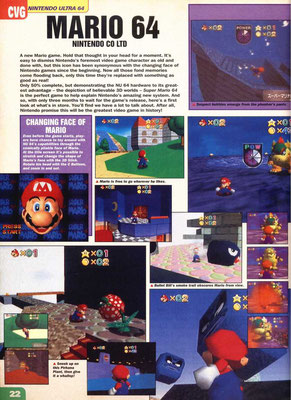 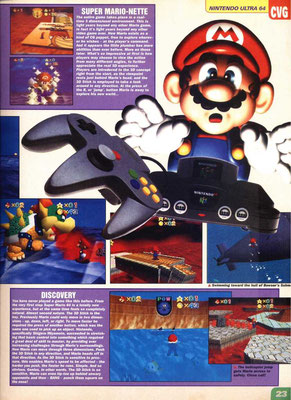 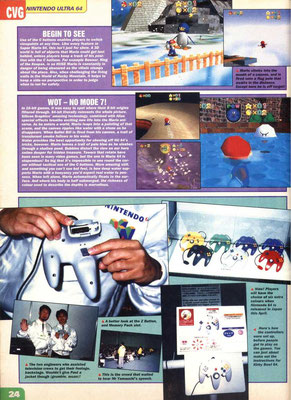 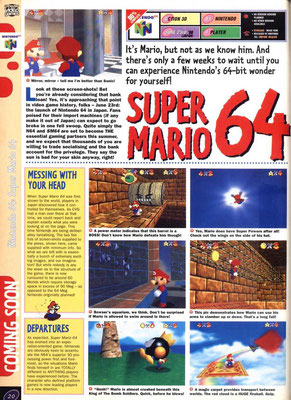 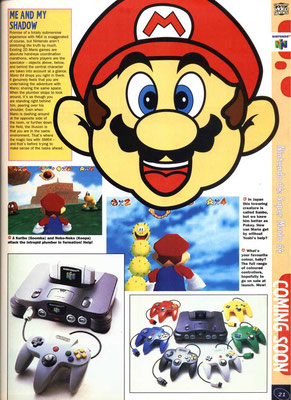 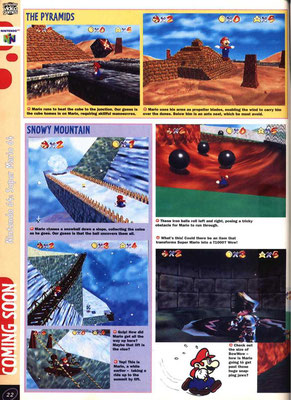 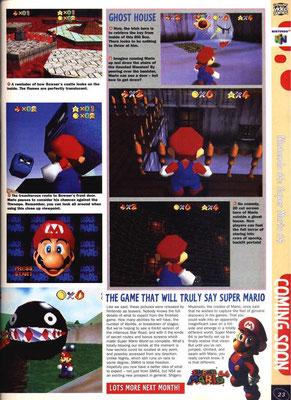 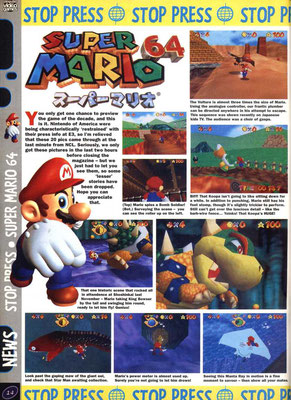 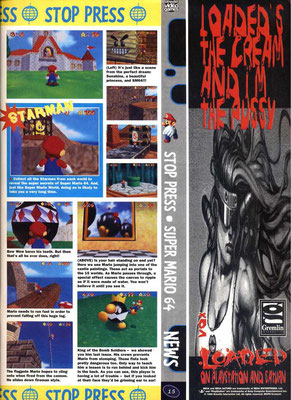 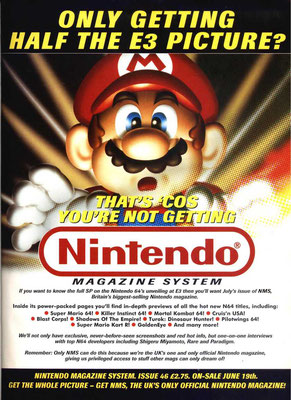 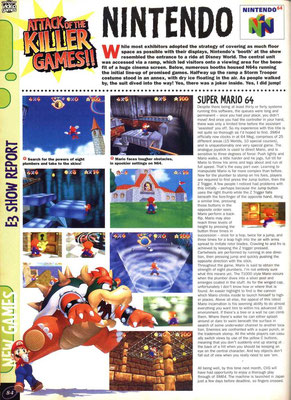 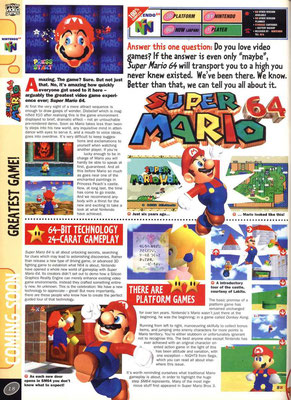 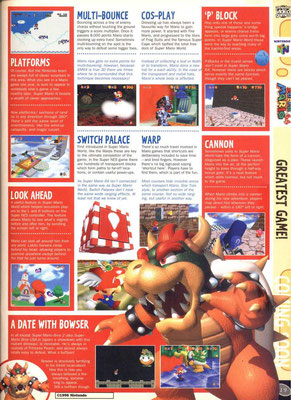 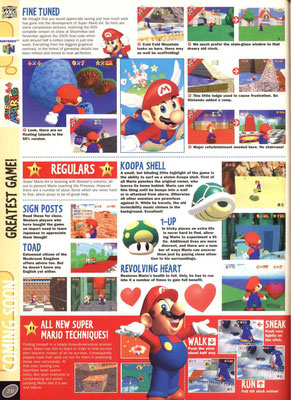 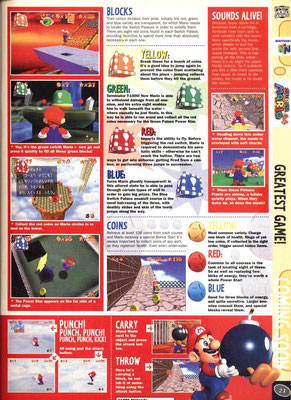 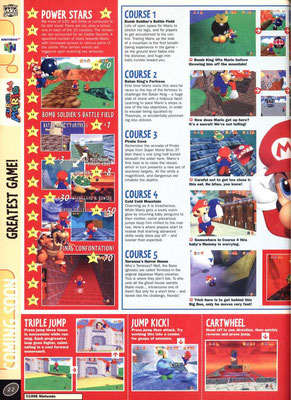 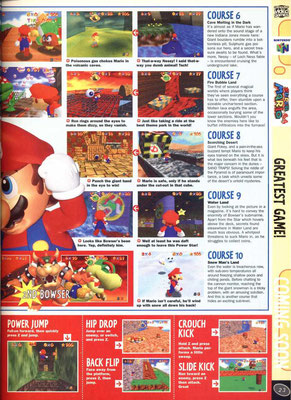 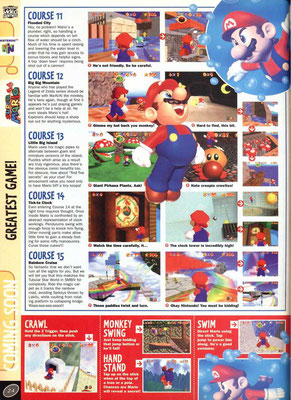 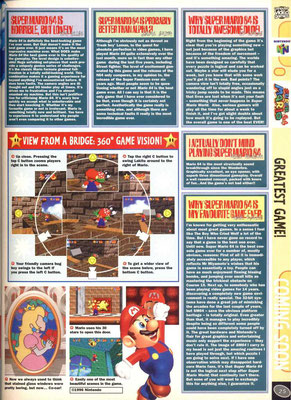 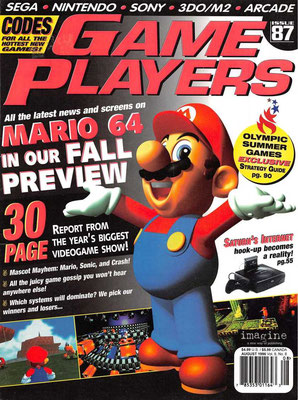 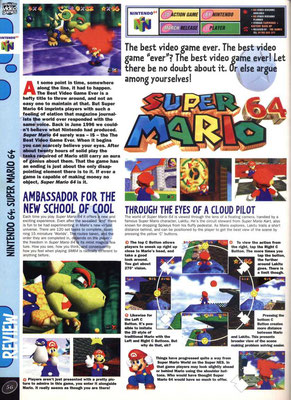 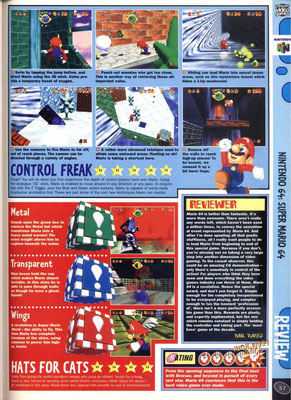 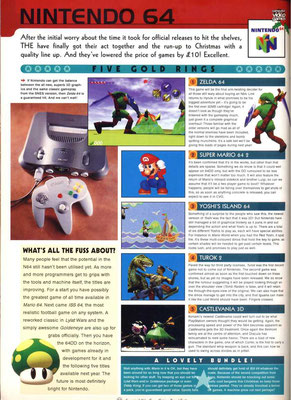 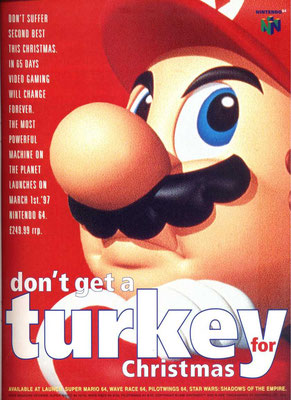 Trivia:
1) Super Mario 64 features more puzzles than earlier Mario games. It was developed simultaneously with Legend of Zelda: Ocarina of Time, but as Ocarina of Time was released more than two years later, some puzzles were taken from that game for Super Mario 64.
2) Time Magazine focused on the realistic kinetic animation and the controls provided by the integration of the new pressure-sensitive controller into the game, calling it the "fastest, smoothest game action yet attainable via joystick at the service of equally virtuoso motion", where "for once, the movement on the screen feels real"
3) Nintendo's first party developer, Rare, reflected in 2013 that during the development of 2001's Conker's Bad Fur Day, they had originally drawn inspiration from their deep analysis of the gameplay and camera mechanics of Super Mario 64: "We were just copying Mario, weren't we? Which, to this day, is still the best 3D camera."
4) Super Mario 64 is the first game to have a "free" camera that can be controlled independently of the character. Most 3D games from the time use a first-person perspective, or a camera that is fixed in position relative to the player's character, or to the level. To create freedom of exploration, and more fluid control in a 3D world, the designers created a dynamic system in which the video camera is operated by the in-game character Lakitu.
The camera system would become the standard for 3D platform games in the future.
5) On May 5, 2011, Super Mario 64 was selected as one of the 80 games to be displayed at the Smithsonian American Art Museum as part of "The Art of Video Games" exhibit that opened on March 16, 2012.
6) In an interview with The New York Times, Rockstar Games (Grand Theft Auto 3) head writer and VP of creativity Dan Houser, when asked about influence from other games stated, "Anyone who makes 3D games who says they've not borrowed something from Mario or Zelda on the Nintendo 64 is lying."
7) Cancelled sequel: There was going to be a sequel, for either the N64 or 64DD, that would have Luigi as a playable character too, but it was never completed. It is possible that this game later became Luigi's Mansion.

10) Original cover art of the game with round small planet (see picture above) created the concept of game "Super Mario Galaxy" (2007).