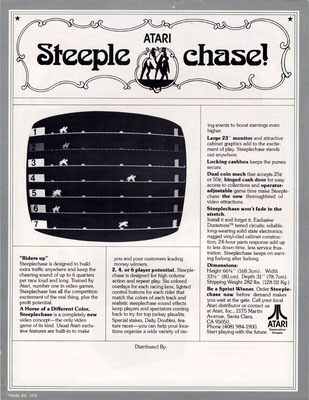 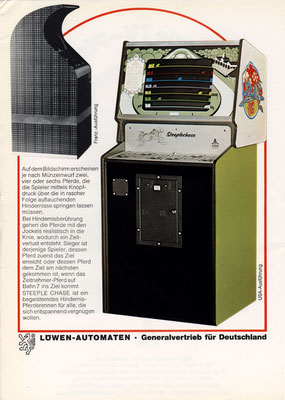 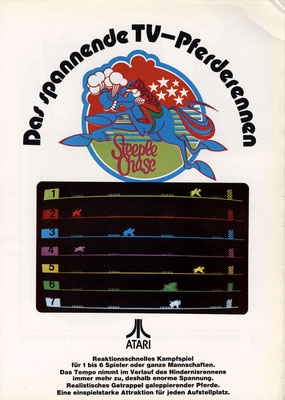 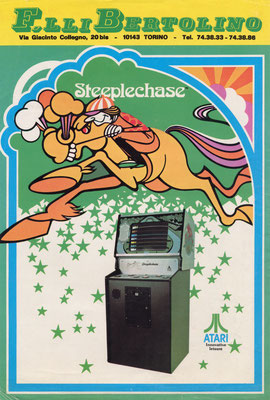 Trivia
1) Steeplechase is a horse racing game. Up to six players can play against each other. You have to make your horse jump over obstacles on a horizontal course.The fastest horse wins.
2) Also released for Atari 2600.
3) Other early games with sidescrolling graphics is Drag Race (1977, arcade),  Bomber (1977, arcade), Warp 1 (1980, arcade) - last two is unconfirmed cause no video of these games exist on internet). If you have videos - please contribute.

4) Another big step in sidescrolling game graphics was in Defender.

6) The prototype name for Steeplechase was 'Astroturf'. The name 'Astroturf' is even still on the board. It is an early Atari board without any dedicated CPU (the computer was a TTL state machine), but had two graphics PROMs for the horses.

7) Second game ever with short music tune (after Gun Fight). Videogames continued to use only short music tunes in the beinning of the game instead of full music - even in 1982.

8) Emulated in: DICE (not fully emulated).