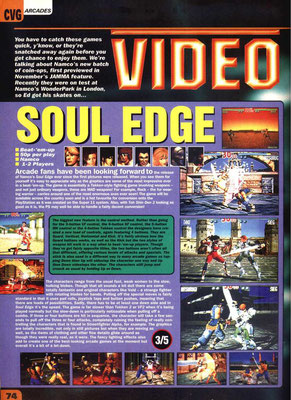 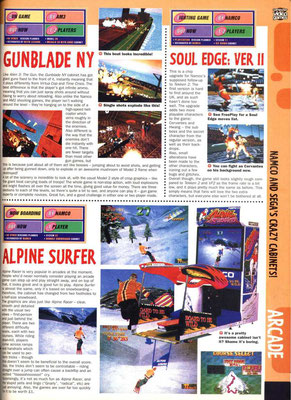 Trivia:
1) Plot: Soul Edge's events take place in the year 1584. The game tells the tale of warriors searching for the ultimate sword, "Soul Edge". It has been given many names throughout the history, such as "The Sword of Salvation", "The Sword of Heroes" and "The Ultimate Sword" among others. Many strong warriors searched for years, but very few actually found it. The sword, currently in the form of a twin pair of long swords, appeared mysteriously in an auction. It was taken by the dreaded pirate Cervantes de Leon and nothing was known of his fate thereafter. Now, nine warriors from around the world (Hwang, Li Long, Mitsurugi, Rock, Seong Mi-na, Siegfried, Sophitia, Taki, and Voldo) search for the sword for different reasons. Some for power, others for revenge; some believing it's a benevolent sword, searching for its support; while others knowing of its evil nature, seeking its destruction. Nothing is known for certain about the sword, except for one thing: it brings misfortune to those seeking it.
2) Processor 140 mhz.

3) Released on Playstation as Soul Blade.