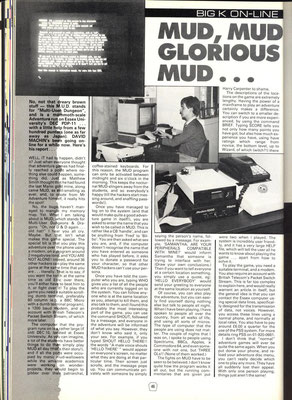 Trivia:
1) MUD was created in 1978 by Roy Trubshaw at Essex University on a DEC PDP-10 in the UK. In 1980, Roy Trubshaw created MUD version 3 in BCPL (the predecessor of C), to conserve memory and make the program easier to maintain. Richard Bartle, a fellow Essex student, contributed much work on the game database, introducing many of the locations and puzzles that survive to this day. Later that year Roy Trubshaw graduated from Essex University, handing over MUD to Richard Bartle, who continued developing the game. That same year, MUD1 became the first Internet multiplayer online role-playing game as Essex University connected its internal network to the ARPAnet. In 1983, Essex University allowed remote access to its DEC-10 via British Telecom's Packet Switch Stream network between 2 am and 7 am each night. MUD became popular with players around the world, and several magazines wrote articles on this new trend.

2) A virtual world or massively multiplayer online world (MMOW) is a computer-based simulated environment. The term has become largely synonymous with interactive 3D virtual environments, where the users take the form of avatars visible to others.These avatars can be textual, two or three-dimensional graphical representations, or live video avatars with auditory and touch sensations.In general, virtual worlds allow for multiple users.

3) Emulated in: Web browser (only simulation)