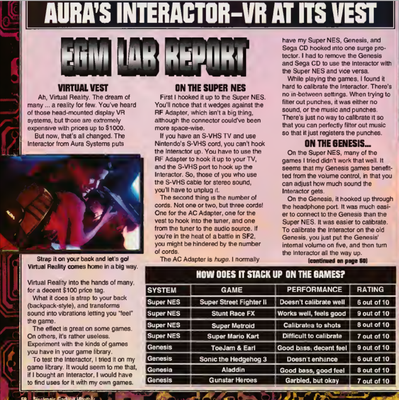 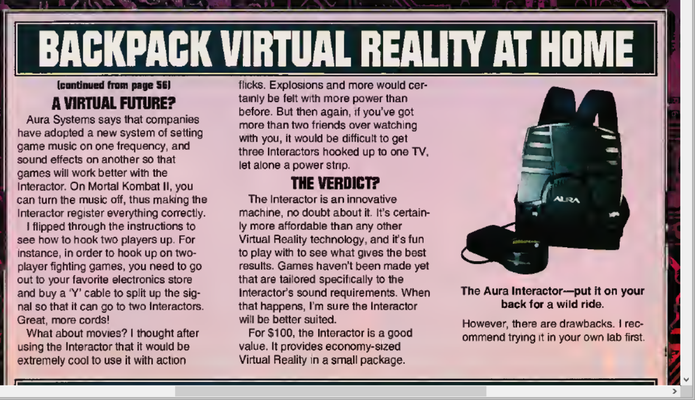 1) Aura Interactor is a wearable force-feedback device developed by Aura Systems, that monitors an audio signal and uses Aura's patented electromagnetic actuator technology to convert bass sound waves into vibrations that can represent such actions as a punch or kick. It is the first commercially available haptic suit,released on September 5, 1994.Inspired by the movie theater sound system Sensurround, EOR technology developer Larry Shultz, then Aura's VP of Audio and Video Technologies, fantasized about what it would be like if a person could "feel" the video game, and not just hear it.
2) Aura signed a deal with Acclaim to promote Mortal Kombat II. In addition to inclusion in Aura's $5,000,000 advertising campaign, Acclaim put Interactor cards in the Mortal Kombat II game boxes and Aura packed Acclaim information in its Interactor packaging. Also as part of the deal, Acclaim programmed special audio cues into the game code which would trigger responses from the Interactor.
3) The Interactor was successful, with more than 400,000 units sold. It received an "Innovation 94" Design and Engineering Award from the Electronics Industry Association. GamePro stated, "If droppin' a C-note is no bother to you, the Aura Interactor serves its purpose."

4) There were strong rumours of animal fatalities called animalities in the game. This was untrue but as a result they were included in Mortal Kombat 3.
5) Kano and Sonya are the only 2 characters not to return from Mortal Kombat, although they can be seen chained in the background of Shao Kahn's stage.
6) Its the port of original arcade version, unlike the predecessor, the SNES version kept the blood and fatalities. However, in Japan all blood was coloured green and the screen goes black and white during a fatality.
7) On September 30, 1994, Mortal Kombat II, with the exception of the Game Boy version, was put on the infamous German cenored index by the BPjS. In addition to the indexing, on February 8, 1995, all versions except Game Boy were also confiscated for violating §131 of Germany's penal code (for showing gruel violence against humans etc.). But due to the 10 year limitation for confiscations, all versions are no longer confiscated since February 8, 2005.
8) Jax was originally going to be named Stryker, a name that would later be used for other character in Mortal Kombat 3.
9) Noob Saibot, a secret character, spelled backwards is Tobias Boon, the last names of the two game creators.