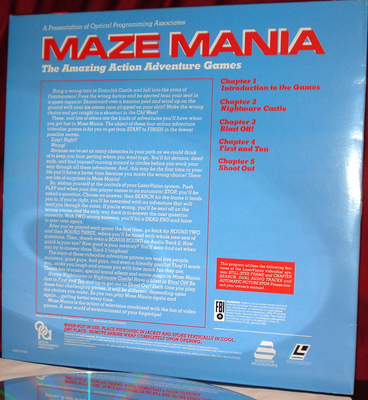 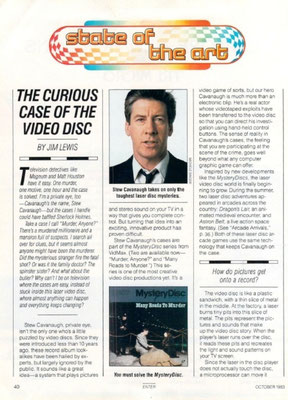 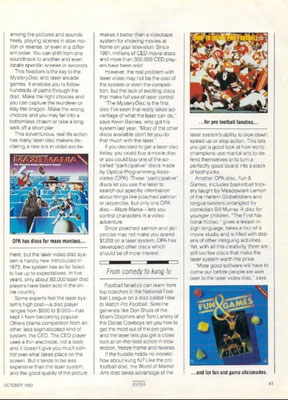 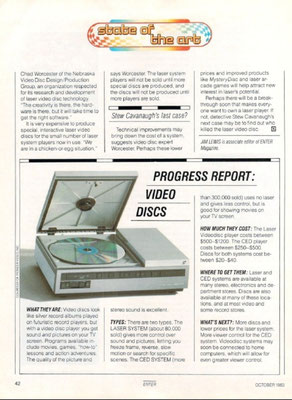 Trivia:
1) Interactive trivia game. Left channel has the main soundtrack, which is just music and effects for the film clips. Right channel is dialog for the bonus round questions (there are a total of four possible game rounds per maze.) The four mazes are composed of trivia on four subjects with three lots of questions each (there are about 120 total possible questions for each subject): Horror films, mythology, and superstitions, astronomy and space travel history,s ports, westerns and US history. Two answers are given to each question with a frame number to jump to. Answer correct and you progress, incorrect and sometimes you get another chance before reaching a "dead end" which sends you several questions back (you get film clips for both answers, sometimes the wrong ones are more fun, The bonus rounds consists of questions regarding details in the film clips themselves, with an answer key given in still frames at the end of each maze program.

2) Live action clips were evidently produced on the cheap and are charming in a cornball manner. The "Blast Off!" segment borrows footage from NASA and Larson's "Buck Rogers" series.

4) Next laser disc live action games was "Murder anyone" (1983) for home laserdisc players, and unreleased "Spirit of the Whittier Mansion" for  speech recognition game console RDI.