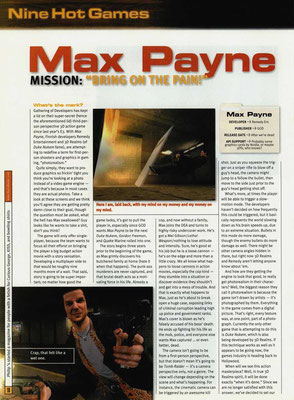 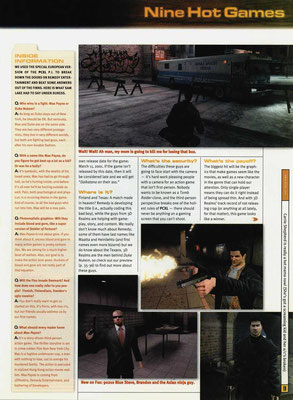 Trivia:
1) Most advanced game graphics at the time.
2) The gameplay is heavily influenced by the Hong Kong action cinema genre, particularly the work of director John Woo, and it was one of the first games to feature the bullet time effect popularized by The Matrix, a form of slow motion — when triggered, the passage of time is slowed down to such extent that the movements of bullets can be seen by the naked eye and enables Max to perform special moves. Although Payne's movement is also slowed, the player is still able to position the aiming reticle and react in real time, providing an advantage over enemies. Likewise, the camera may follow the path of a bullet fired from a sniper rifle. (this was featured first in Requiem: Avenging Angel (1999).

3) Max's bullet time abilities seem to mirror these of the berserkers, Norse Viking warriors who drove
themselves into such a frenzy when they entered battle that they seemed superhuman-strong, fast, untiring, and unable to feel pain.
4) As a result of the inevitable comparisons to The Matrix, the designers have included several homages to the film in order to capitalize on the hype (for instance, the detonation of the subway tunnel door to gain access to the bank vault is similar to the cartwheeling elevator door in the movie, while the introduction "Nothing to Lose" level is similar to the lobby shootout scene in the film). Futuremark, which licensed the MAX-FX graphics for their 3DMark benchmark series, included a Matrix-like lobby shootout as a game test in the 2001 edition.
5) Early on, the V drug was not only a mind-warping drug, but also body-warping. It fact it made its users grow into hulking giants with glowing green eyes. In fact, early script drafts deal with super soldiers. There were even work in progress screenshots which shows Max fighting these super soldiers (see picture below). All this was scrapped as it looked silly and was too similar to "Sin" game.
6) In Part I, Chapter Six, Max Payne enters a small flat. There is a gun lying on the counter, and a gangster can be heard whistling in the toilet. The toilet doors are locked tight, unless the player picks up the gun, which makes the adversary flush the toilet and come out. This is a reference to Quentin Tarantino's movie Pulp Fiction: (!Pulp Fiction spoiler) - This area closely resembles the scene of Vincent Vega's death, when Butch sneaks into his apartment and shoots Vic with his own gun which he left on the counter in the kitchen.

7) In the first level, Roscoe Street Station, Max overhears two thugs talking. After a moment of conversation or two, a phone rings. The ring tone is The Ecstasy of Gold from the film The Good, the Bad and the Ugly, composed by Ennio Morricone.
8) In the skyscraper mission, in one of the elevators, if you stay and listen, you will hear some guards talking about how it would be cool if you could see your moves in slow motion. The guard concludes by saying that he will name this effect Bullet-Time.
9) In one part of Max Payne, the graphic novel jokes about Max being in a game (this happens in one of the
nightmare sequences).
10) Max Payne features a lot of Remedy (developer company) employees as characters in the game, including screenwriter Sam Lake which face was a model for a Max Payne face himself (see picture below)
11) Max Payne kills literally hundreds of people in this game. The total count for the entire game is 662,
but one kill is included for a dream sequence.
12) Max Payne is named in reference to Max Rockatansky from the 1979 film "Mad Max". Like Max Rockatansky, Max Payne is a policeman whose wife and child is murdered.
13) The death of Alex Balder in Chapter 1 Part 2 was the longest and most difficult cut-scene for the Remedy team to accomplish. After many different attempts they could not make the death look convincing enough from any exterior angle. Finally, in a shot of brilliance one of the developers decided the death should be witnessed from Alex's perspective as he fades away -a nod to film  Leon: The Professional (1994). This was the only way they could've gotten the scene to work.

14) Game runs on Windows 10 with patch.
15) Originally the scene of the death of Max Payne's wife was to be witnessed through a cut-scene, but the developers could not get the effect they wanted with the technology available. Instead, since they had excellent voice work, they decided not to shift perspective from Max, and have him listen only to her screams as she died. The sound files for the scene are still present in the final version of the game, but are not used. 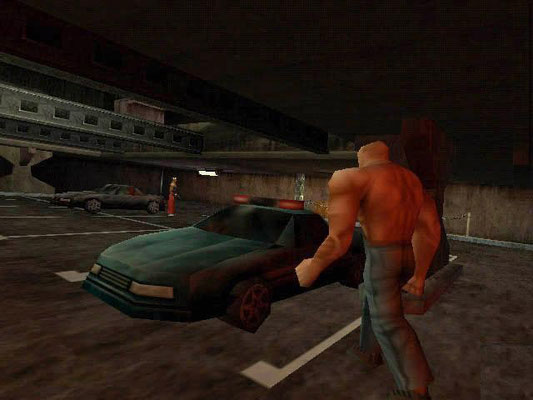 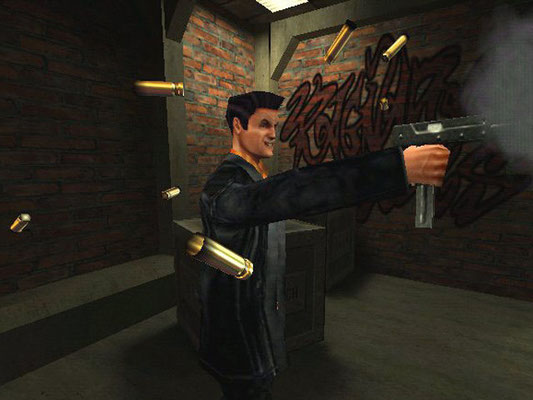