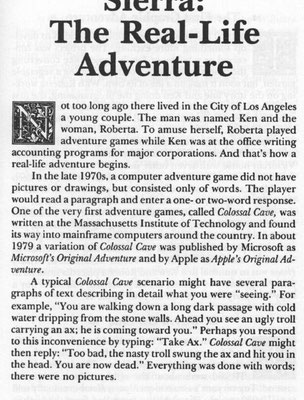 Trivia:
1) IBM paid 850,000 $ development cost, requested a sophisticated and replayable adventure game.
2) Original game for Pcjr personal computer was a lot more advanced in graphics than DOS version - the DOS version of King's Quest lacks some sound effects present in the booter versions, including birds chirping and distinct sounds for each enemy. Also the AGI V2 engine used an off-screen buffer when drawing the graphics to avoid the painting effect of the original game. This was not done merely for the sake of tidiness, but because the booter versions inadvertently allowed the player to cheat as they drew hidden objects followed by scenery on the screen.

3) The original IBM-branded release for the PCjr came with a full keyboard overlay template. Released as a demonstration product for the PCjr demo machines.
4) Sir Graham was named so  because of designer Roberta Williams' fondness for graham crackers.
5) Pcjr front cover has a completely wrong description and picture of King's Quest, because the box ad copy was written before the game was completed.
6) The flag of Daventry, as seen in the throne room, is in fact the flag of Sierra Leone. This is actually a pun referring to the development company, Sierra On-Line.
7) Some of the game characters and items are based on "Grimm's Fairy Tales" and other children books, among them: the magic beans and giant from "Jack and the Beanstalk"; the magic mushroom from "Alice in Wonderland"; the gnome Rumpelstiltskin, the witch and the gingerbread house from "Hansel and Gretel"; the invisibility ring from "The Hobbit" and "Lord of the Rings".
8) One alternative way to deal with the giant is to kill him by using sling and pebbles - an obvious reference to the Bible story about David and Goliath.