The Sword of Damocles 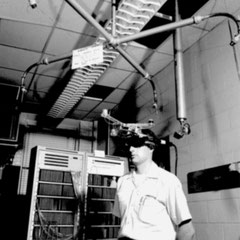 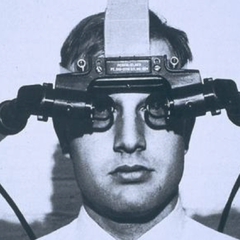 Trivia:
1) The device was primitive  and the graphics comprising the virtual environment were simple wireframe cube. Creator of the game, Ivan Sutherland developed a system allowed the user to view 3D-generated computer graphics and to see those graphics as if they were in the same environment as the user. System itself consisted of six subsystems: a clipping divider, matrix multiplier, vector generator, headset, head position sensor, and a general-purpose computer, unit was partially see-through —which would make these the components of the first augmented reality machine as we know them today. Device paved the way to the first Virtual Reality Headset (NASA Virtual Reality Headset (1985).
2) First display application was a cube suspended in the air in front of the user.

3) From manual -"We can display objects which appear to be close to the user or which appear to be infinitely far
away. We can display objects beside the user or behind him which will become visible to him if heturns around. The user is able to move his head three feet off axis in any direction to get a better view of nearby objects. He can turn completely around and can tilt his head up or down thirty or forty degrees. The objects displayed appear to hang in the space all around the user. We have concluded that showing "opaque" objects with hidden fines removed is beyond our present capability. The three-dimensional objects shown by our equipment are

transparent "wire frame" line drawings." Special spectacles containing two miniature cathode ray tubes are attached to the user's head. The optical system in this headset magnifies the pictures on each of two tiny cathode ray tubes to present a virtual image about eighteen inches in front of each of the user's eyes. Each virtual image is roughly the size of a conventional CRT display. Half-silvered mirrors in the prisms through which the user looks allow him to see both the images from the cathode ray tubes and objects in the room simultaneously. Thus displayed material can be made either to hang disembodied in space or to coincide with maps, desk tops, walls, or the keys of a typewriter."

6) Augmented reality (AR) is a live direct or indirect view of a physical, real-world environment whose elements are augmented (or supplemented) by computer-generated sensory input such as sound, video, graphics or GPS data. It is related to a more general concept called mediated reality, in which a view of reality is modified (possibly even diminished rather than augmented) by a computer. As a result, the technology functions by enhancing one’s current perception of reality.

7) 3D video game is a video game with 3D game graphics, that are computed in 3 dimensions.

8) A wire-frame 3D model is a visual presentation of a three-dimensional (3D) or physical object used in 3D computer graphics. It is created by specifying each edge of the physical object where two mathematically continuous smooth surfaces meet, or by connecting an object's constituent vertices using straight lines or curves. The object is projected onto a display screen by drawing lines at the location of each edge. The term wire frame comes from designers using metal wire to represent the three-dimensional shape of solid objects. 3D wire frame allows to construct and manipulate solids and solid surfaces. The 3D solid modeling technique efficiently draws higher quality representations of solids than the conventional line drawing.

11) Ivan Sutherland -"I did some preliminary three-dimensional display experiments during late 1966 and early 1967 at the MIT Lincoln Laboratory. We had a relatively crude optical system which presented information to only one of the observer's eyes. The ultrasonic head position sensor operated well enough to measure head position for a few minutes before cumulative errors were objectionable. The coordinate transformations and perspective computations were performed by software in the TX-2. The clipping operation was not provided: if any portion of a line was off the screen, the entire line disappeared.Even with this relatively crude system, the three-dimensional illusion was real. Users naturally moved to positions appropriate for the particular views they desired. For instance, the "size" of a displayed cube could be measured by noting how far the observer must move to line himself up with the left face of the right face of the cube."

12) Ivan Sutherland also created the first ever 3D computer animation (watch Computer Sketchpad (1962) on my other site " History of CGI").