First game that allowed player to jump over objects (jump over gaps and obstacles or approaching enemies), second game with cut-scenes (after Pac-man), first true platform game with jumping ability 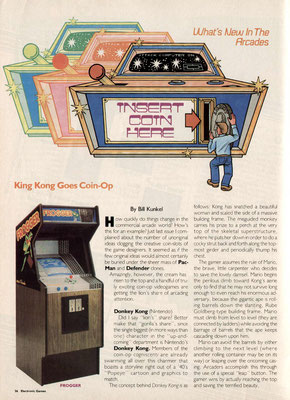 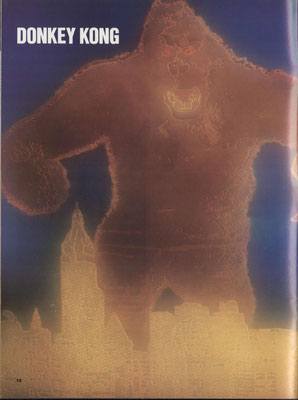 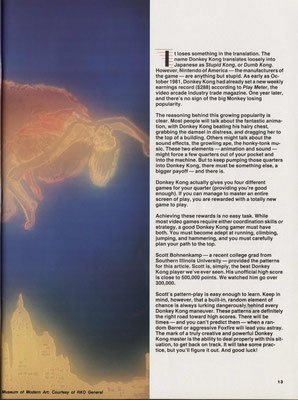 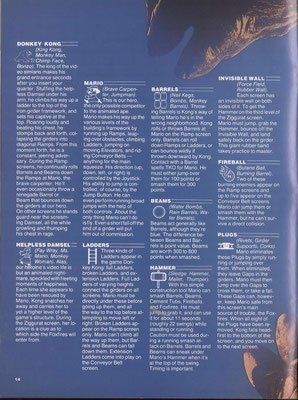 Trivia:
1) Inspired by King Kong, Popeye, and Beauty and the Beast stories.
2) A lawsuit brought on by Universal City Studios, alleging Donkey Kong violated their trademark of King Kong, ultimately failed.
3) The hero is a carpenter originally named Jumpman, and would later be known as Mario. The ape kidnaps Jumpman's girlfriend, originally known as the Lady, but later named Pauline (often confused for Princess Peach).
4) At the time, Nintendo was also pursuing a license to make a game based on the Popeye comic strip. When this license attempt failed, Nintendo took the opportunity to create new characters. Miyamoto came up with many characters and plot concepts, but he eventually settled on a love triangle between gorilla, carpenter, and girlfriend that mirrors the rivalry between Bluto and Popeye for Olive Oyl.
5) Origins of the name "Donkey Kong":  Miyamoto looked in a Japanese-English dictionary for something that would mean "stubborn gorilla", or that "Donkey" was meant to convey "silly" or "stubborn"; "Kong" was common Japanese slang for "gorilla".
6) The name of Jumpman, a name originally chosen for its similarity to the popular brands Walkman and Pac-Man, was eventually changed to Mario in likeness of Mario Segale, Nintendo's office landlord.