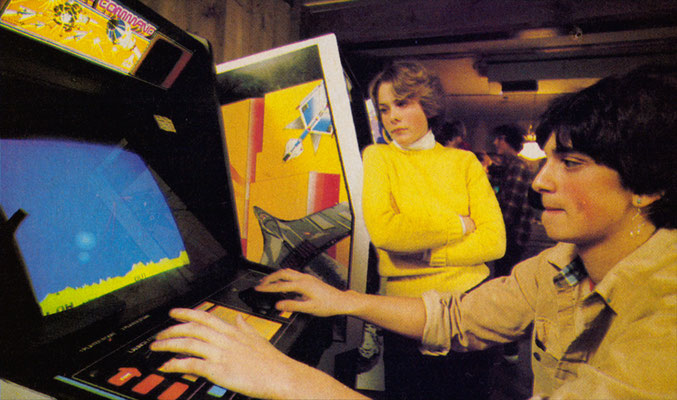 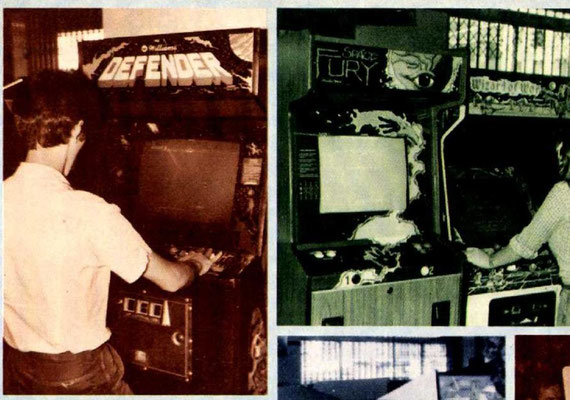 Defender is an attack-from-outer-space game. It is played on a large color video screen where nullity bombs and destructo beams are hurled at the player by the machine’s computer. Increasingly rowdy sound effects suggest what James Joyce, under the influence of William Blake (who would have loved these gadgets), called “the ruin of all space, shattered glass and toppling masonry, and time one livid final flame.” The Defender player controls a small cannon-firing jet plane that flies at varying altitudes and speeds over a barren planetscape. He must shoot down a bewildering variety of alien bad guys, each with his own pattern of behavior: dodge an assortment of missiles: and rescue helpless spacemen, vulnerable to being kidnaped, who appear randomly on the planet’s surface. He must have reflexive control of a joystick that determines altitude and of five separate buttons that fire the cannon, change forward thrust, reverse direction, make the ship skim off the screen into hyperspace and fire a limited supply of smart bombs, which blow up everything in sight. As is fiendishly true of all of the good new video games, as the game progresses, Defender shifts to subtler strategies and sends out its alien waves with increasing speed. You play the machine and it plays you.

A neophyte has as much chance with Defender as he would if he were to take over the controls of an F-16. A reasonably good video-game athlete—that is how game junkies are beginning to describe themselves—will last it out for a few thousand points, or a couple of minutes. A superb player, the kind not seen in every arcade, may hit 500,000 on his best day.

Trivia:
1) Game is set on a fictional planet where the player must defeat waves of invading aliens while protecting astronauts.
2) Developes felt a game that allowed the player to fly off the screen would be exciting, and decided to create a game world larger than the screen displayed. The game's environment was made longer than the screen, with the visible area scrolling horizontally. Expanding on the idea, they envisioned a version of Space Invaders rotated 90 degrees. By changing the orientation of Space Invaders ' design, the ship moved up and down while flying horizontally. Large asteroids, an element from the game "Asteroids", were then added to the game world, but were later removed because the staff felt it lacked enjoyment.
3) Inspired by the 1960s television show The Defenders. Words from developer- "There was actually an old TV show called The Defenders about attorneys back in the 1960s, and I kind of liked that show. You know, if you're defending something, you're being attacked, and you can do whatever you wanted."
4) The landscape is depicted as a line only a pixel wide, primarily because the hardware was not powerful enough to generate anything more detailed.
5) The developers estimated that the game would require 4 colors, but instead chose hardware that could display each pixel in 16 colors. At the time, the designers believed that was more than they would ever need for a game.
6) Described as the most important space game in the early 1980s. I'ts realism and technological advances pushed developers to create more popular games, Gorf for example.

9) First side scrolling game was Steeplechase.