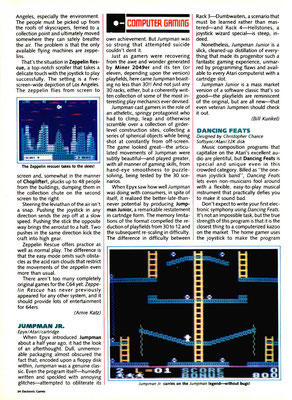 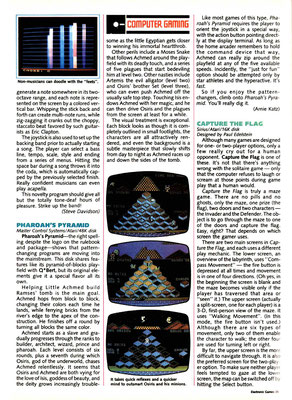 Magazine review - Compute! (1984)
"Take a Commodore 64, Atari, or Coleco Adam, add a joystick and a program from Softsync, and you have created a musical instrument that can be played easily by nonmusicians.
The program, Dancing Feats, is subtitled The One Man Joystick Band. Dancing Feats provides the backup, and you use the joystick to make a melody. The music rings out instantly, because there's virtually nothing—in terms of music—to learn.
The kind of music Dancing Feats makes is dependent on
the decisions you make from a series of menus. The main menu provides the following choices: Choose Bass, Choose Beat, Choose Style, Choose Tempo, and Choose Ending. For each of these choices, there is a submenu. For example, if you select Choose Beat, the submenu asks you to choose from Jazz, Rock, Blues, or Boogie Woogie.
Go through the process for each of the main menu headings, and then you're ready to play.
Making Music
Dancing Feats follows your instructions and begins performing in its role as a backup band. It goes through a chord progression, playing in the style and tempo you selected.
Your joystick provides the melody. As you push it in various directions, different notes are added to the composition. The program sees to it that the note you're playing is compatible with the chord being played by the computer. Pressing the fire button on the joystick will change the octave of the note you're playing.
Once a song is under way, you play as long as you like. When you're ready to end your composition, press the space bar, and the program will begin to play the ending you selected before you began. The possible endings are The Duke, The Elvis, The Chance, and The Mozart.
As you play, the screen displays a visual accompaniment to your music. Colored bars dance on the screen for each note you play. The positioning of the bars is relative to the pitch of the note being played. Low notes are displayed oh the left, high notes are displayed on the right.
The screen also shows you what chord the computer is playing and what note you are playing.
The program includes an a cappella mode, in which you can play melody without accompaniment.
An Educational Tool
Dancing Feats does provide the user with a simple musical instrument, but there are some differences between it and a conventional instrument. With Dancing Feats, the musician is not in full control. You can't use your joystick to play Mary Had a Little Lamb or your favorite poptune. You can play only notes that are compatible with the chords the computer is playing.
If, for example, you keep the joystick in the same position while the computer plays a C chord, you'll get the same note. But when the computer switches to an F chord, that same position on the joystick will play a different note.
The music that results from Dancing Feats, while lively and enjoyable, cannot be composed note for note in the conventional sense. Nevertheless, Dancing Feats does provide nonmusicians or beginning musicians with the opportunity to learn something about music and music theory. For example, by experimenting with the options under Choose Tempo in the main menu, the user will learn the differences among adagio, allegretto, allegro, and vivace.
Dancing Feats cannot hope to duplicate what might result from solid training and years of practice on a conventional instrument, but it certainly allows those who haven't had such training to make a little music that sounds pretty good.
Children too young to tackle the intricacies of a violin or saxophone will enjoy the upbeat computer backup, and will be thrilled to make music many times more sophisticated than their dimestore xylophone can produce."