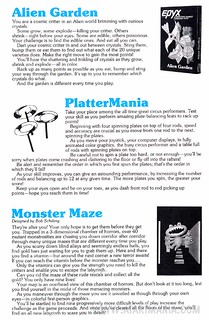 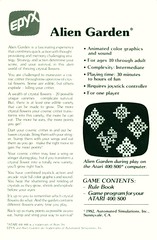 Trivia:
1) Scrolling planet consisting mainly of 24 clusters of crystals, representing flowers. You control an cosmic  life-form with wings and and must ensure its survival and reproduction through up to 20 generations.

2) An art game (or arthouse game) is a work of interactive new media digital software art as well as a member of the "art game" subgenre of the serious video game. The term "art game" was first used academically in 2002 and it has come to be understood as describing a video game designed to emphasize art or whose structure is intended to produce some kind of reaction in its audience. Art games are interactive (usually competitive against the computer, self, or other players, and they are the result of artistic intent by the party offering the piece for consideration.They also typically go out of their way to have a unique, unconventional look, often standing out for aesthetic beauty or complexity in design.

3) Non-games are a class of software on the border between video games and toys. The original term "non-game game" was coined by Nintendo president Satoru Iwata, who describes it as "a form of entertainment that really doesn't have a winner, or even a real conclusion". Will Wright had previously used the term "software toy" for the same purpose. The main difference between non-games and traditional video games is the lack of structured goals, objectives, and challenges. This allows the player a greater degree of self-expression through freeform play, since he or she can set up his or her own goals to achieve.