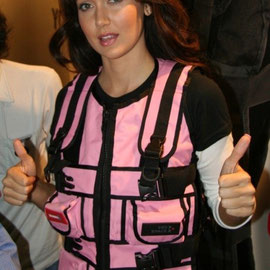 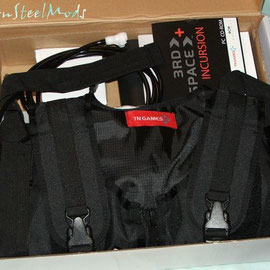 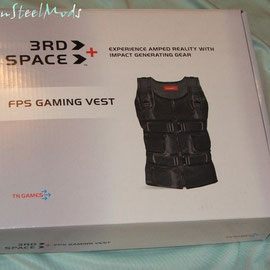 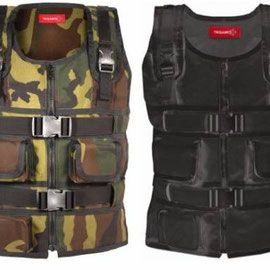 pics of the tactile suit

Review - Forbes.com
Get Pounded by TN Games' ForceWear(TM) Vest
"TN Games, makers of computer hardware and software products, today unveils ForceWear(TM) Vest. Video-based content is amplified as players wearing ForceWear Vest are pounded both front and back with hits from rapid gunfire, or experience body slams associated with racecar driving. With ten pounds of force at each of the 8 contact points, ForceWear Vest imparts tactile events and impact throughout game play including directional force to create unending anticipation.
"From the young gamer to the hardened industry veteran, all have been astonished by how much TN Games' ForceWear Vest amplifies the gaming experience," said TN Games' CEO, Dr. Mark Ombrellaro. "We are excited to launch ForceWear Vest at the Game Developers Conference. TN Games' is redefining the concept of interactive entertainment by combining feedback that is unexpected and thoroughly suspenseful."
With a customizable-look geared toward shooter and racing games, ForceWear Vest impacts single gunshot wounds, multiple missile gunshot wounds, through and through missile injuries, kicks, punches, and can be used to impart G-force effects for driving/racing or aerial flight content. Standard visual cues during game play are rendered obsolete as hits, kicks and punches from outside the players' field of vision are felt.
ForceWear is currently available in black tactical vest, camouflage, as well as a racing vest with flame-suit appearance. TN Games' ForceWear Vest is being introduced on PC platform and will be available to consumers in November 2007.
TN Games at GDC
TN Games' is participating this week at the 2007 Game Developer's Conference in San Francisco, CA from March 7 through 9. Please visit TN Games' Booth 5307, North Hall in the Microsoft Pavilion at Moscone Center to demo the ForceWear Vest.
About TN Games
Based in Redmond, Washington, TN Games develops computer hardware and software products that enhance the realism of game playing through touch sensory experience. TN Games ForceWear Vest(TM) offers a wearable force-production system sending physical impacts directly to players' bodies, transmitted from the virtual environment. TN Games offers a new level of interactive entertainment for the gaming industry."

Trivia:
1) 3rd Space™ Incursion is a FPS game with haptic suit, and has singleplayer and multiplayer modes. Multiplayer functionality is possible with LAN, Local, and Internet play. Online offers deathmatch, last man standing, and "capture" gameplay (where teams vie over control of points on the map), also instagib versions of some of the game modes (Instagib, Insta-clan-arena, insta-capture).
2) The ForceWear Vest is a haptic suit that was unveiled at the Game Developers Conference in San Francisco in March 2007. The vest was released in November 2007.
3) The vest uses eight trademarked "contact points" that simulate gunfire, body slams or G-forces associated with race car driving. It is unique because unlike traditional force feedback accessories, the vest is directional, so that action taking place outside the players' field of view can also be felt. A player hit by gunfire from behind will actually feel the shot in his back. Powered by an air compressor, the unit will be capable of delivering up to 30 psi at each touch point. A player hit by gunfire from behind will actually feel the shot in his back while he may not be otherwise aware of this using standard visual display cue.
4) As of current, the vest works with these games: Call of Duty 2, 3rd Space Incursion, Half-Life 2: Episodes 1 & 2, Crysis, Enemy Territory Quake Wars, Clive Barker's Jericho, Unreal Tournament 3, F.E.A.R., Medal of Honor: Airborne, Quake 4 and Doom 3.

5) Unreleased prototype of haptic suit Powerskin was mentioned in article Computer and videogames in 1998. (watch picture below).