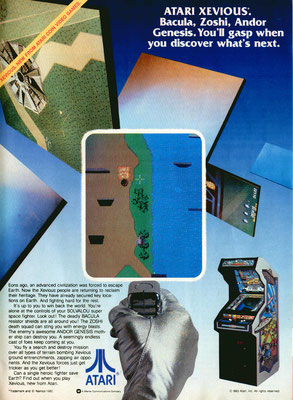 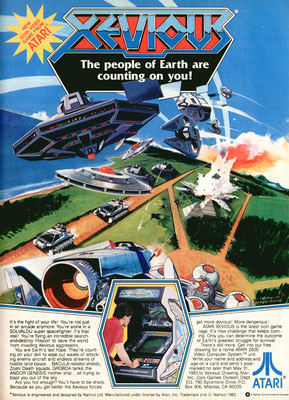 Trivia:
1) Plot: Year 2012 - Xevious tells the story of the fight between humankind and the biocomputer GAMP, which controls the alien forces of planet Xevious. It turns out that the Xevious inhabitants are originally from Earth, and GAMP (General Artificial Matrix Producer) is the product of an ancient civilization that prospered on earth a hundred thousand years ago. During this golden age, the Gamps were human clones used in heavy labor, until they rebelled to their own creators. In order to survive the upcoming Ice Age, they planned to leave earth and migrate in search of a new homeland. They finally selected seven planets that were likely suitable to human life.
Right before the departure, a group of humans rebelled and decided to stay on the earth anyway. It is from here that thousand years after the leaving of the Gamps that the brave pilot Mu and his android companion Eve decided to travel to Xevious (literally, the fourth planet) to avoid glaciation. They would not receive a warm welcome from their ancestors, though: captured and imprisoned, they discovered that the Xevians were actually planning a massive comeback on the Earth. Fast forward to our days: all above the Earth's surface, and near the ancient civilization remains, giant artifacts suddenly emerge from the soil and activate: they are SOL towers, buried underground and inactive for eons, now responding to GAMP's orders. The invasion has begun: it is now that, with perfect timing, Mu, Eve, and Mio Veetha, a Xevian who opposes to the Gamp's regime and freed our duo from prisoning, are back on the Earth on their Solvalou ship and ready to fight Gamp's army. Meanwhile, archaeologists Susan Meyer and Akira Sayaka discovered that the Nazca lines could be hiding an ancient weapon that may be used to counterattack Gamp's army.
2) According to game compilation "Namco Museum DS", a three-part novel was written about Xevious entitled "Fardraut". However, not much is known about the book, implying that it was never even released. According to the game, some backgrounds, characters, events and even sounds were inspired by the book.
3) The background is actually one large 1024x2048 image. Each of the 16 game areas is a 224x2048 strip starting at a different horizontal offset in the image.

4) Pre-rendering is the process in which video footage is not rendered in real-time by the hardware that is outputting or playing back the video. Instead, the video is a recording of footage that was previously rendered on different equipment (typically one that is more powerful than the hardware used for playback). Pre-rendered assets (typically movies) may also be outsourced by the developer to an outside production company. Such assets usually have a level of complexity that is too great for the target platform to render in real-time. The term pre-rendered refers to anything that is not rendered in real-time.