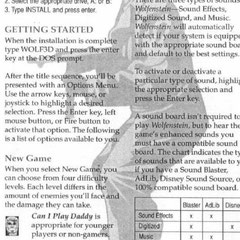 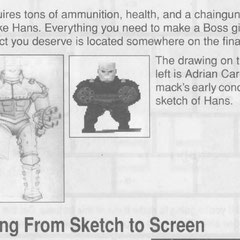 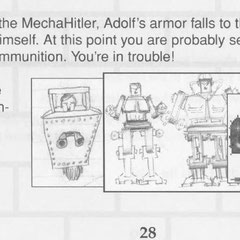 Magazine review - Computer Gaming World (1992)
"Castle Wolfenstein 3-D is, with Ultima Underworld, the first game technologically capable of creating a sufficient element of disbelief-suspension to emotionally immerse the player in a threatening environment, even when viewing it on a flat screen. I can't remember a game making such effective use of perspective and sound and thereby evoking such intense physiological responses from its players. I recommend gamers take a look at this one, if only for a cheap peek at part of interactive entertainment's potential for a sensory immersed virtual' future."

Trivia:
1) Morse code: In Episodes 3 & 6 of the registered version the music seems to include a Morse code beeping in the background, translated as - "TO BIG BAD WOLF DE ("de" means "from" in amateur radio Morse code jargon); LITTLE RED RIDING HOOD; ELIMINATE HITLER; IMPERATIVE COMPLETE MISSION WITHIN 24 HOURS OUT"
2) It is widely regarded as having helped popularize the genre on the personal computers and having established the basic run-and-gun archetype for many subsequent first-person shooters.
3) The early concept of the game included some innovative stealth concepts, including dragging dead bodies, swapping uniforms with fallen guards and silent attacks as in the earlier Wolfenstein games, which emphasized stealth rather than action. These ideas were dropped because they slowed the game down and complicated the controls.
4) Computer Gaming World praised the "sparse but gorgeous ... frighteningly realistic ... extremely violent" graphics and sound, warning "those sensitive to such things to stay home".
5) Censorship: Because of the game's use of Nazi symbols, including the swastika and the Nazi Party's anthem "Horst-Wessel-Lied" as theme music, the game was withdrawn from sale in Germany despite its portrayal of Nazis as the enemy. The use of Nazi symbols is a federal offense in Germany in most contexts, as outlined in German law. The Atari Jaguar version was confiscated following a verdict by the Amtsgericht Berlin Tiergarten on December 7, 1994. On January 29, 1994, Wolfenstein 3D was put on the infamous German index by the BPjS. The English GBA version followed November 29, 2003. Wolfenstein 3D is violating §86a of Germany's penal code (for using characteristics of unconstitutional organizations), therefore it is illegal to produce, distribute, import, export and use it in the public. This does not mean it is illegal to just own the game. Despite this fact, the game's German distributor made this game available in Germany in January 1994 (that's why the game was put on the Index in the first place), so the reaction was a nationwide confiscation, which became effective January 25, 1994 (and statute-barred on January 25, 2004). By the way, the charge for violating this paragraph is either a fine or a prison sentence of up to 3 years; and the distributor, who was responsible for all this (and the resulting common misconception) had to face one of these two. However, according to the Apogee Faq site, the name of the game was changed by fans to "Hundefelsen 4C", allowing them to play and distribute the game around Germany. Up through 2018, the Germany software ratings board, the Unterhaltungssoftware Selbstkontrolle (USK) refused to rate any game that included inappropriate symbols and imagery, effectively banning the game for sale within the country. However, in August 2018, the decision was reversed by the German government, having determined that the Wolfenstein 3D decision was outdated since the USK now included age ratings alongside other content warnings, and that video games should be considered as art under the social adequacy allowance. In November 2019, Wolfenstein 3D was formally struck from the "Index", the list of games banned from sale in Germany.
6) SNES version of the game was heavily edited. All swastikas and Nazi references were removed. Hitler, a boss character in the game, had his mustache removed and was renamed "Staatmeister". Blood was replaced with sweat to make the game seem less violent; on SNES copies distributed in Germany, the enemy blood was green. Attack dogs were replaced by giant mutant rats. Employees of id Software said in The Official DOOM Player Guide about the reaction to Wolfenstein that it was ironic that it was morally acceptable to shoot people but not dogs. The opening music was also changed.
7) Prior, computer shooter games were most often scrolling shooters, Wolfenstein 3D helped move the market towards first-person shooters.

8) The protagonist of the game is Commander Keen's grandfather.
9) If you finally shoot the boss in the 6th episode, he will say "Rosenknospe" before he falls. This is the German word for "rosebud", the famous last word of Charles Foster Kane, played by Orson Wells, in the movie classic Citizen Kane. According to John Romero this was Tom Hall's idea.

10) Third game to introduce "weapon in hands", after The Super Spy and Catacomb 3D.

12) Arcade VR version was released in 1993, called WolfensteinVR. A virtual reality rendition of Wolfenstein 3D with advanced graphics, uses a hardware system called the Reality Rocket, which was produced by Alternate World Technologies, the makers of the game. The cabinet is a sit-down unit equipped with a joystick and a stereoscopic head-mounted display. In a mission to assassinate Hitler and effectively stop World War II, players roam around labyrinthine hallways, shooting Nazis and avoiding being shot, just like in the original. Although the game uses bit-mapped graphics with full-color texture mapping (as opposed to the more standard polygon graphics found in most VR games), the virtual reality effect is suitably immersible. Game is lost. (see photo below).