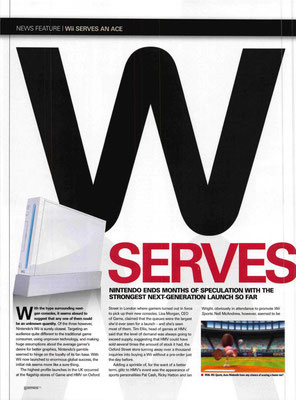 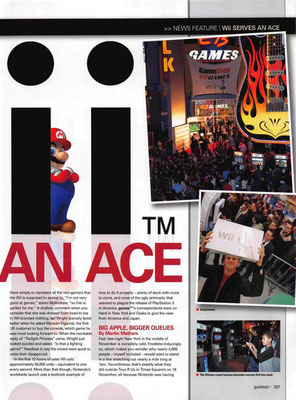 Trivia:
1) The game is a collection of five sports simulations, designed to demonstrate the motion-sensing capabilities of the Wii Remote to new players. The five sports included are tennis, baseball, bowling, golf, and boxing. Players use the Wii Remote to mimic actions performed in real life sports.
2) Casamassina referred to the controls as "revolutionary" and described them as intuitive.
3) PC Magazine columnist John C. Dvorak, an avid bowler, praised the realistic physics used in bowling and stated, "Nintendo did a stupendous job of coding."
4) A study involving 13-15 year old teenagers was conducted by the Liverpool John Moores University and concluded that players used 2% more energy than by playing on other consoles. They stated that it was no substitute for playing a real sport, but could contribute to weight management.
5) Wii Sports has been used to aid in the physical therapy of a boxer at the Glenrose Rehabilitation Hospital in Canada, stroke victims in Minneapolis, Minnesota and Raleigh, North Carolina, and injured soldiers in Prescott, Arizona; Washington, D.C. and Landstuhl, Germany.
6) Wii Remote is the primary controller for Nintendo's Wii console. A main feature of the Wii Remote is its motion sensing capability, which allows the user to interact with and manipulate items on screen via gesture recognition and pointing through the use of accelerometer and optical sensor technology. Another feature is its expandability through the use of attachments. The attachment bundled with the Wii console is the Nunchuk, which complements the Wii Remote by providing functions similar to those in gamepad controllers.

7) Greatly adding to the atmosphere is the Wii Remote’s speaker, which will emit the crack of a bat, the whistle of a golf club slicing through the air, or the sound of a tennis ball striking your racket right around where you would expect to hear the sound normally.

8) Emulated in: Dolphin (not fully emulated).

9) In the development of Wii Sports, Nintendo tried to use Mario characters in place of the Miis (watch picture below), but found out that people liked the simple Mii style better. The current Mii design is based on traditional Japanese wooden dolls (known as “Kokeshi”).