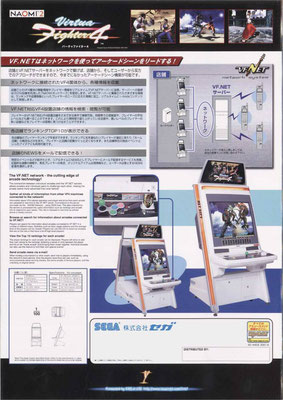 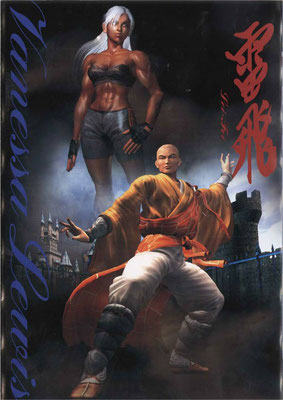 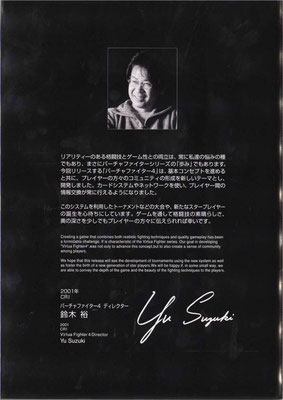 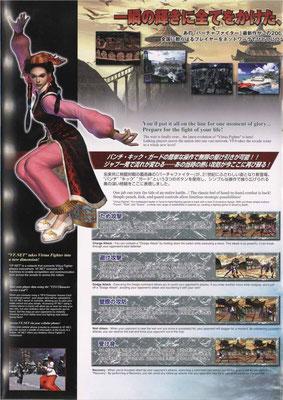 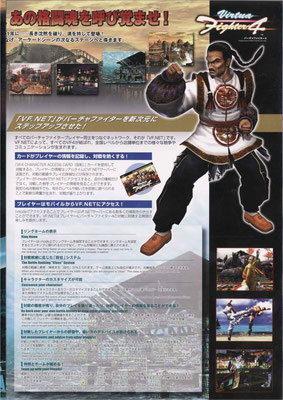 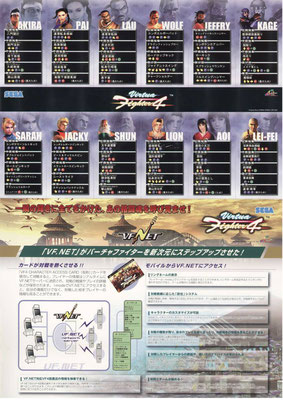 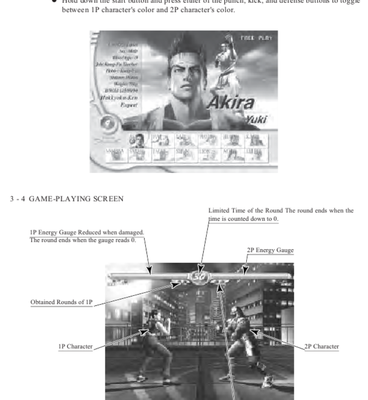 Posters and photo from manual

"There was once a time when many believed 3D fighting was an impossibility, not from a development standpoint, but from a gaming view. Many believed gamers wouldn't be able to handle all the mechanics that would be seen in a true 3D game, where movement in the X, Y, and Z plane could confuse and complicate things for players used to the 2D arena. Of course, in walks AM2 with Virtua Fighter and when it debuted in arcades, many were amazed at the sense of realistic 3D movement that was surprisingly simple to learn. Moving and controlling your character in the game was intuitive, allowing players to concentrate more on the surprising amount of depth. It's this depth that was transferred to the phenomenal sequel, Virtua Fighter 2, and Virtua Fighter 3. While many believe the Virtua Fighter name has lost some weight when compared to the very popular Tekken or Dead Or Alive series, I believe Anthony Chau, IGNDC

Virtua Fighter 4 will change a few minds... and if not, at least it'll open a few eyes very wide open.

It's impossible to judge how wonderful or bad Virtua Fighter 4 will be, based on the few hours of gameplay on the test machine we were blessed with. As it stands, the game is shaping up to be one of the hottest fighting games in the arcade -- and when it comes to the PS2, players who have traditionally got their 3D fighting fix from Tekken or Dead or Alive may find themselves in a bit of trouble when they see Virtua Fighter 4.

Since we're all visual characters, let us start off with the graphics in Virtua Fighter 4. Sure, there are a few jaggies noticeable in the backgrounds but if this isn't one of the finest looking video games I've laid my eyes on, let Zeus strike lightning upon me. The texture quality on the stages, the super-solid 60 fps frame rate, the particle effects from fighters getting slammed into snow, sand, tile, the intricate backgrounds of the coliseum, the thousands of leaves that move as your character dashes past them... This game is a definite feast for the eyes. Although we've supplied a number of images below, you really have to see this game move to appreciate how gorgeous the visuals are in VF4. In addition to the awesome spectacle of the backgrounds, the characters themselves have all been remodeled; veteran fighters from previous Virtua Fighter games look much older. More specifically, Shun Di and Lau look like dinosaurs in this game. The game features dynamic camera angles when throws are successfully initiated and this might pose a problem with some characters that have multi-part throws (i.e. Aoi).

With the changes in visuals also come changes in the play mechanics. One of the biggest departure since Virtua Fighter 3 is the omission of the "evade button," as the VF4 controls go back to the VF2 button setup. Undoubtedly, this will anger many of those hardcore veterans who spent numerous hours perfecting all the evade mechanics associated with the button. For full 3D movement, VF4 has adopted a similar side-stepping system seen in Soul Calibur's 8-Way system: quickly tap down, down (then hold) or down, up (then hold) to initiate the side-step feature. However, VF4 characters don't move quite as quickly; the side-stepping speed is about the same as side-stepping in Dead or Alive 2. Don't fret though as VF4 includes a new evade counter system.

As an opponent launches an attack, quickly tap down, down or down, up while simultaneously pressing all three buttons - punch, kick, and guard. Your character will quickly side-step and attack, though depending on which character you choose, the attack may not come as quickly as you want. For example, Pai's and Akira's evade counter are extremely quick, while Wolf's evade counter is a bit slow on the draw. VF4 has also added a hit effect; when you strike a player with a powerful blow, your attack will send off a subtle lighting effect. I've seen yellow, red, and blue lighting effects and it seems there's some correlation between the color of the glowing hit and the timing of your attack. For example, if you deliver Akira's dashing elbow right after Pai misses a sweeping kick, the attack will glow red and Pai will stagger back. When a character gets staggered, a joystick icon will appear in the upper corner of the screen, indicating the player to shake the controller to counter the stagger effect quickly. I haven't tried this out too much; by the time I noticed the shaking joystick icon, my opponent has followed up with a knock-down attack.

There are a few more play mechanics, and new moves that I've seen, and I'm sure there's a lot more to learn; Virtua Fighter games have been legendary when it comes to gameplay depth.

We'll be back tomorrow for part 2 as we talk about some of the additional changes in gameplay mechanics and controls, as well as a breakdown of each of the characters. For now, check out the images and high-resolution movies below!"

3) The game was first released in arcades on the NAOMI 2 board in 2001. Game was ported on Playstation 2, as well as updated arcade version of the game called "Virtua Fighter 4: Evolution"

4) In Japan, Virtua Fighter 4 is famous for spearheading and opening the market for internet functionality in arcades. VF.NET started in Japan in 2001, and since then companies have created their own arcade networks - e-Amusement by Konami, NESiCAxLive by Taito and Square Enix, and ALL.Net by Sega and Bandai Namco.

5) Hint: Different costumes - Hold Start and then select your character with any button.