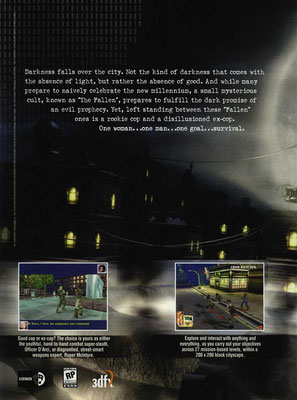 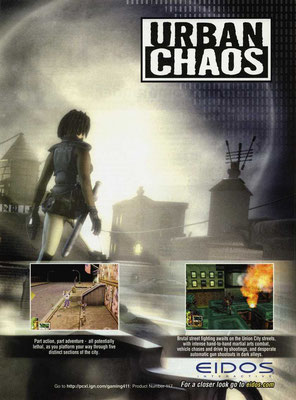 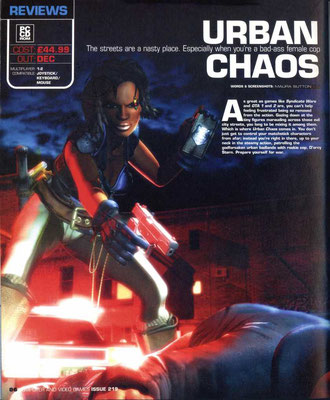 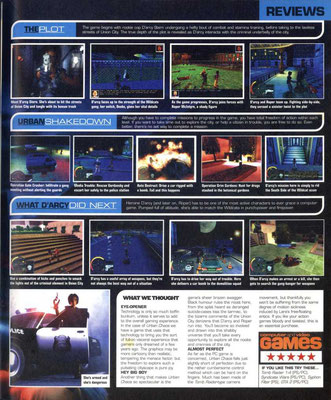 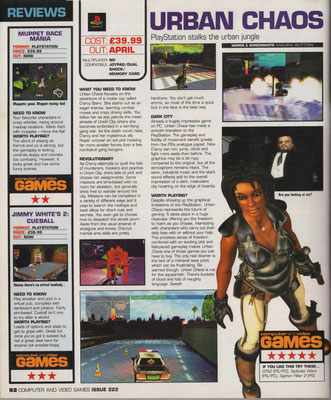 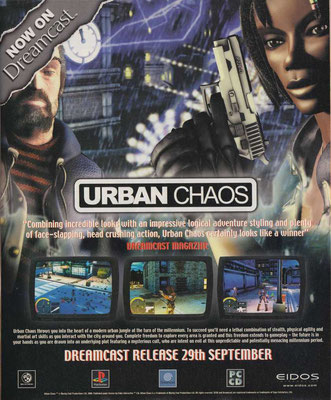 Trivia:
1) Game utilized a rather complex fighting system incorporating kicks, punches, throws and sliding tackles as well as two melee weapons; knives and baseball bats.
2) The city maps, although small, do include indoor areas, people to talk to, fights to intervene in and even additional missions and completely different ways to achieve the player's goals that include assaults, hostage rescues, and stopping someone from committing suicide.

3) Urban Chaos was originally conceived as a Double Dragon-style game, with the environment-as-weapon flourishes of a Jackie Chan movie, but at the last moment, it was pitched to Eidos as an open-world-combat-driving game.

5) Eurogamer.net (UK) (Jan 04, 2000)- "Playing Urban Chaos gives you a great feeling of really being in a run-down city. Litter blows through the streets, which are alive with people going about their business"

6) Game Vortex (1999) - "I was quite surprised by the graphics in Urban Chaos. Union City, where most of the action takes place, is modeled exceptionally well. No detail was too small, as "Mucky Foot"(developer company) put a huge amount of effort into making this city as real as possible. As you run through the streets, leaves and papers blow about behind you beautifully and puddles not only reflect characters, but the moon as well. Everything is as you would find in a real city - well, a really bad city. Pedestrians walk around the town like real people, (and if you don't like them, you can beat the crap outta them, yeah!) thugs' attack without warning and cars drive around. No, this isn't New York City, it's Union City. This music is very nice as well, and sounds are what you would expect from a game like this. Nothing can top the sound of beating a pedestrian with a baseball bat."

7) First open world game where you can play as a criminal (additional missions for Jamaikan mafia after the game is completed).

9) As you see in article below, game developers planning to have motobikes, subway and hand glider. First subway in open world game was released later in GTA 3 (2001), first motorbikes in GTA Vice City (2002), and first hang glider in Far Cry 2 (2008).