Advanced ragdoll physics, first game world to be completely influenced by classical mechanics, first ability to render objects like trees and rocks as 2D sprites (which, when close enough to player, would be replaced by their 3D counterpart), first specular highlighting, first height mapping to render a full-sized island, first game to produce the sound of any two objects colliding with one another at any speed or distance by dynamically mixing several sounds together on-the-fly, first first-person shooter where you see your body when look down, first game with unpredictable artificial intelligence of enemies, advanced bump mapping 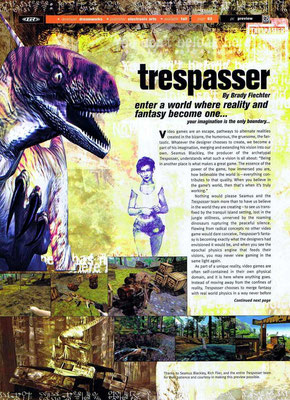 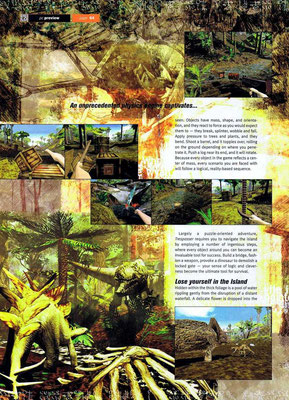 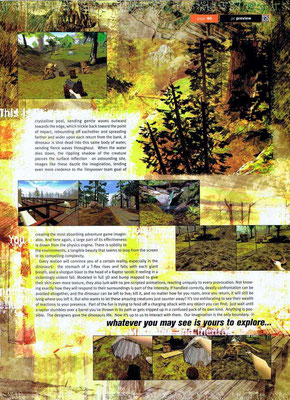 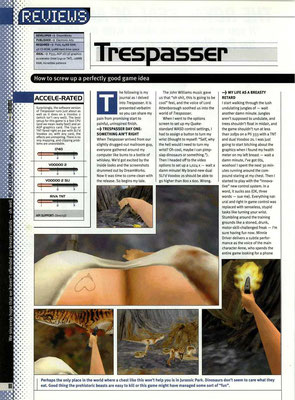 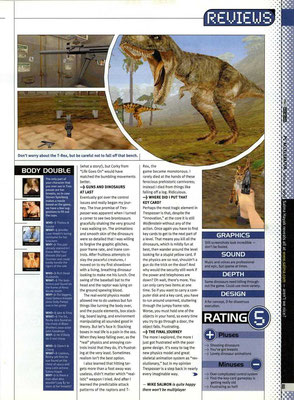 Trivia:
1) The game is noted for the involvement of American producer Steven Spielberg and award-winning British actors Lord Richard Attenborough and Minnie Driver.
2) The Trespasser engine was, and in many ways still is, unique. In 1998, it was one of the first engines to successfully portray outdoor environments full of hundreds of trees (split into chunks due to memory limitations).
3) One of the most impressive features of Trespasser is a system dubbed by the creators as "Real-Time Foley". Theoretically, the Trespasser engine could produce the sound of any two objects colliding with one another at any speed or distance by dynamically mixing several sounds together on-the-fly. As of 2009, the only other significant game to feature this is Penumbra.
4) Every animation in Trespasser is done using inverse kinematics. No animation in the game is pre-animated; every movement of every dinosaur is generated automatically through their artificial intelligence.
5) Trespasser has an early incarnation of company "Looking Glass" traditional basketball court, at the beginning of the "town" level, complete with a ball you can dunk into one of the nets.
6) The engine had very advanced and never seen-before features - like every object had its own material and weight and collisions could be calculated very realistic.
7) The Monolith from the movie 2001: A Space Odyssey (1968) appears in an inaccessible part of the third level.

8) A specular highlight is the bright spot of light that appears on shiny objects when illuminated (for example, see image at right). Specular highlights are important in 3D computer graphics, as they provide a strong visual cue for the shape of an object and its location with respect to light sources in the scene.

9) Heightmap or heightfield is a raster image used to store values, such as surface elevation data, for display in 3D computer graphics. A heightmap can be used in bump mapping to calculate where this 3D data would create shadow in a material, in displacement mapping to displace the actual geometric position of points over the textured surface, or for terrain where the heightmap is converted into a 3D mesh.

10) First -"Hide until your lifebar get normal again" game.