The Legend of Zelda: Ocarina of Time 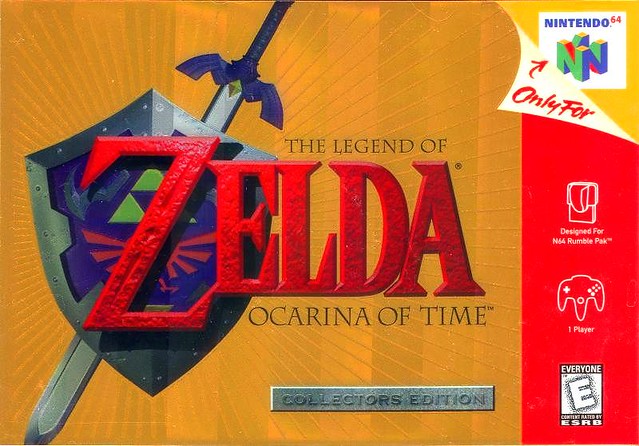 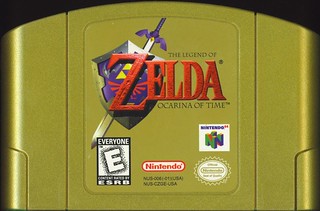 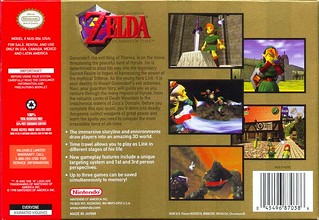 Review
Detroit Free Press (Freep) (Dec 04, 1998)
"It's not very often a game as hyped as Legend of Zelda: Ocarina of Time lives up to its advance billing.
Believe the hype, my friends, because this is one masterpiece of a game. Zelda's amazing 3-D fantasy world will quickly suck you in, and its stellar adventure will keep you lashed to your Nintendo 64 for days.
One of the most successful Nintendo creations ever, the latest and greatest Zelda is the fifth game of the series and first for Nintendo 64.
Combining elements of traditional role playing with real-time action-adventure, this long-awaited N64 title is a unique experience. Add excellent graphics quality, sound effects and player control to the mix, and you have a game with few peers.
As with previous Zeldas, you play the role of Link, an elfin boy from the Kokiri Forest. Link has been chosen to save the world of Hyrule from the evil plans of Ganondorf, king of thieves.
Link's quest will put him in contact with several characters from previous games as well as some new ones. Link is also aided by his fairy, Navi, who assists Link in numerous ways.
Control of Link through the more than 100 hours of game play is easy to master. In addition, the Nintendo control buttons make it simple to select and use the game's numerous weapons and other pickups.
Link will age, travel through time, rely on his horse Epona, solve numerous puzzles and master several weapons as the game progresses.
There's simply not enough space in this column to explain in detail the finer points of this superb game. Fans of previous Zelda games are sure to love it, and anyone with an N64 should give it a try. Just be sure to clear a large chunk of time to play it."

1) Cloth physics (Soft body physics) - physics system, which uses "soft body." Soft body is anything in the environment that is not solid - curtains and flags, ropes and spiderwebs, plastic doors. It participates to the feeling of total immersion. Allows the realistic movement of curtainlike objects which is improved by adding environment mapping to them (if you run through a curtain, it will react differently than when you creep through This interaction also creates its own unique shadows).

2) Other earliest games that use same physics is - Nocturne (1999) (cloth physics to simulate the main character's coat, among other things), Hitman: Codename 47 (2000) (interactive cloth banners that react to player collision believably in the Lee Hong Assassination mission), Tom Clancy's Splinter Cell used advanced soft body physics.
3) The N64 version of The Legend of Zelda: Ocarina of Time appears in the book "1001 Video Games You Must Play Before You Die" by General Editor Tony Mott.
4) The Legend of Zelda: Ocarina of Time started life in development for Nintendo's 64DD add-on for the Nintendo 64 (which was a disk drive that was only released in Japan with little fanfare). The 64DD flopped in Japan and it wasn't even released in the USA. As a result, this game, instead of being released in disks, was crammed into a cartridge (which was the biggest N64 pre-Expansion Pak cartridge released, in terms of space). Even though it was originally developed and planned for the 64DD, it was announced to much surprise that Zelda would release in cartridge form for the N64 first; further indicating that the disk drive platform was not gaining the traction Nintendo had hoped for.
5) Due to overwhelming fan requests, Nintendo decided to release the original production releases of the game as a gold-colored cartridge, restoring the "golden cartridge" lineage that had previously been broken by the SNES version of The Legend of Zelda: A Link to the Past, and The Legend of Zelda: Link's Awakening for Game Boy.
6) Religious censorship: The only notable change between game version 1.0 and 1.1 is that the Fire Temple music was changed a little bit. It had a chant from an islamic prayer looped in the background which offended some members of the Islamic community. In the Gamecube version of the game the symbols on the blocks, switches and Mirror Shield have also been changed because they represented an islamic symbol.
7) Censorship: In game version 1.0  final boss originally had red blood which was changed to green in later version.
8) An advertisement for Ocarina of Time shown in british TV proved to be controversial. Using the slogan "Willst thou get the girl? Or play like one?", the ad provoked complaints to the Independent Television Commission from viewers who considered it sexist. ITC however ruled against taking the ad off the air, stating that "such tongue-in-cheek treatments were unlikely to have the widespread negative affect that those who complained feared."
9) Looking through the windows of Zelda's Castle, players can see pictures of Mario, Bowser and other Super Mario Bros. characters adorning the walls.

10) The development involved more than 120 people, including stunt performers used to capture the effects of sword fighting and Link's movement.
11) Developer Miyamoto initially intended Ocarina of Time to be played in a first-person perspective to enable players to take in the vast terrain of Hyrule Field better and let the team focus more on developing enemies and environments. The concept was abandoned once the idea of a child Link was introduced, and Miyamoto believed it necessary for Link to be visible on screen.
12) Ocarina of Time originally ran on the same engine as Super Mario 64, but was so heavily modified that Miyamoto considers the final products different engines.

14) Ocarina of Time was featured on a number of compiled lists of best or most influential games. It was ranked the greatest video game of all time by numerous publications.