The House of the Dead 4 Special

Advanced haptic technology -  two 100-inch screens, one in front of the players and another behind, as well as a five-speaker sound system, giving the impression that enemies are attacking from all directions. The seat shakes when zombies attack, and players are blasted with air whenever they take on damage. The seat automatically rotates to face the players towards whichever screen zombies. 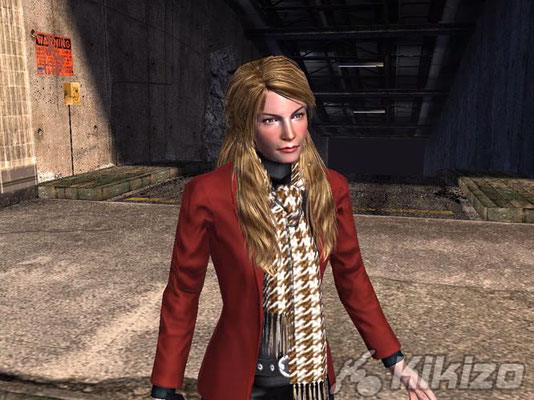 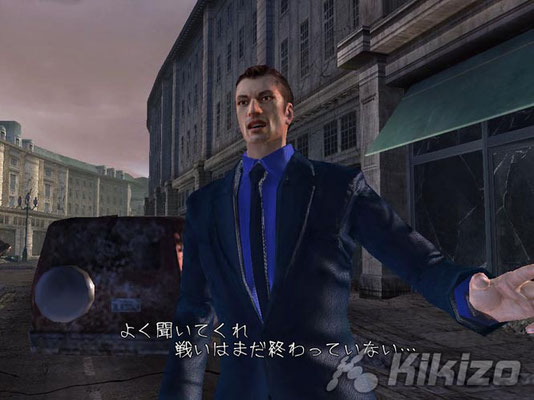 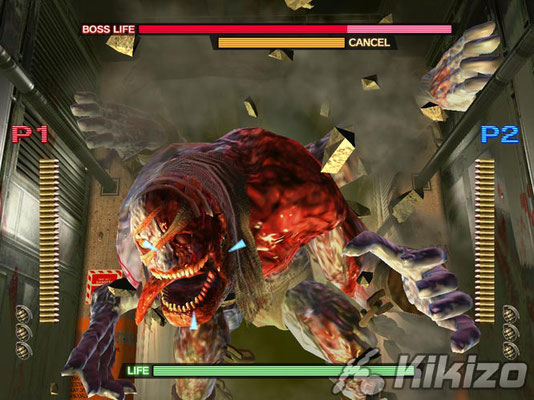 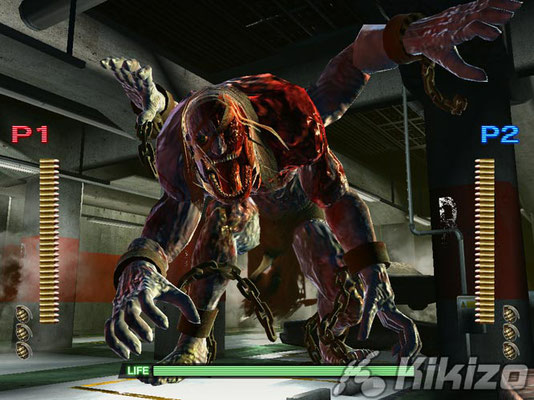 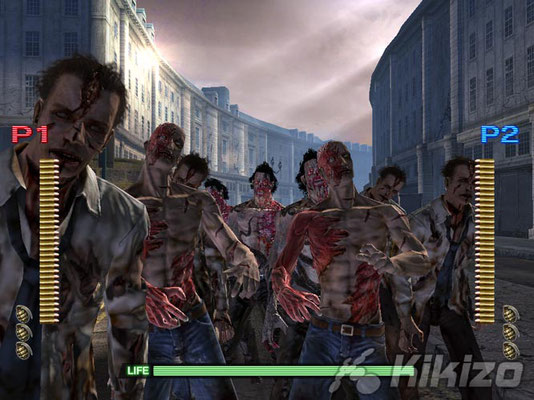 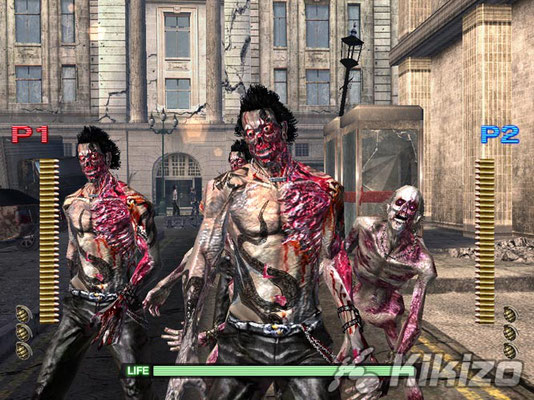 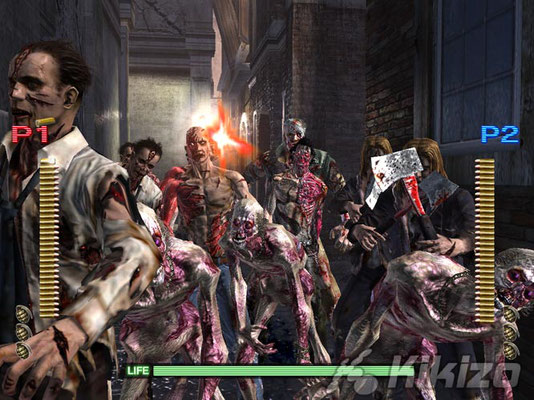 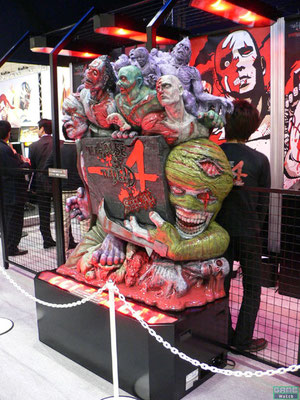 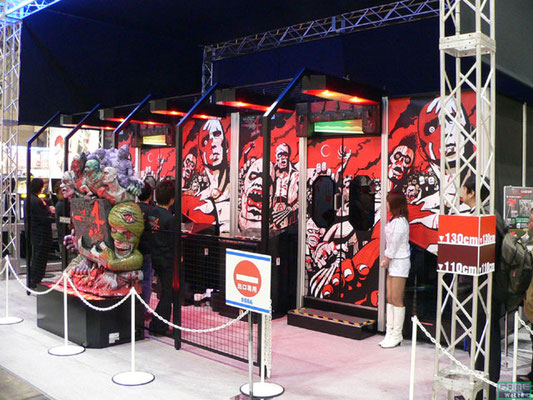 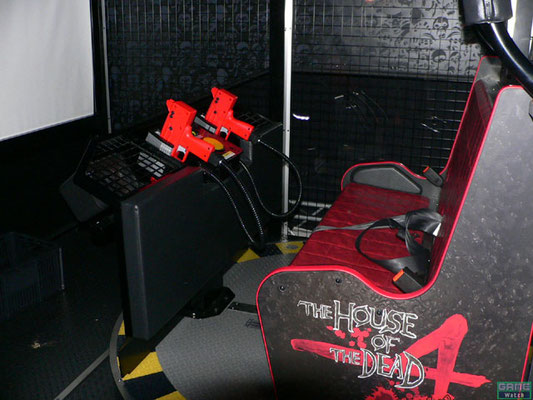 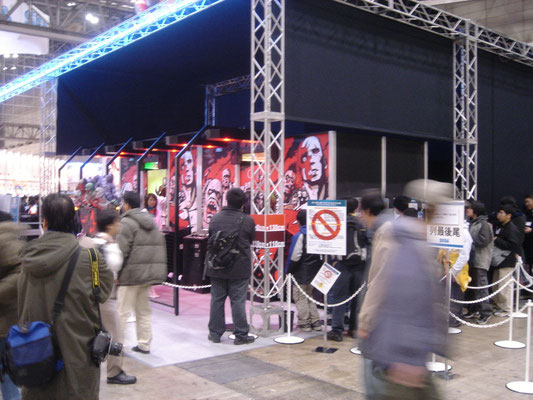 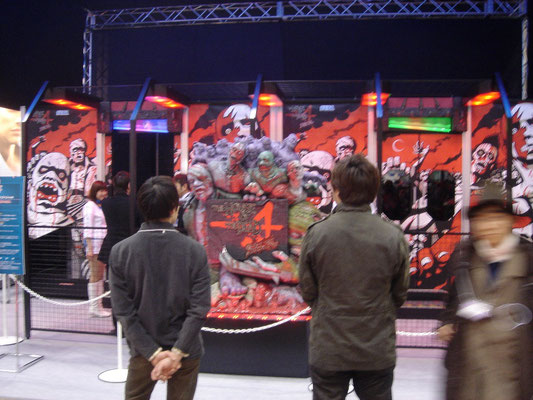 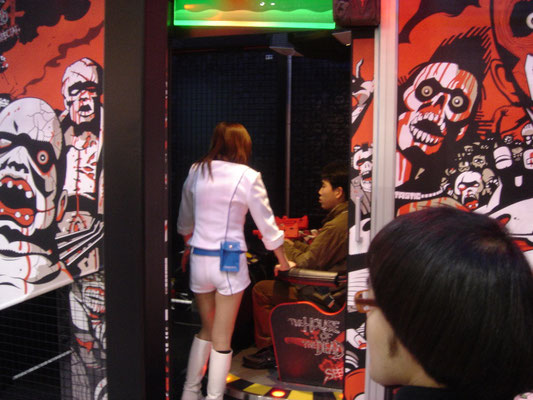 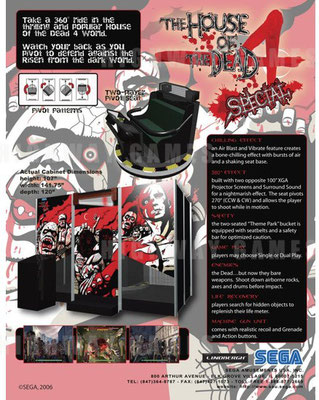 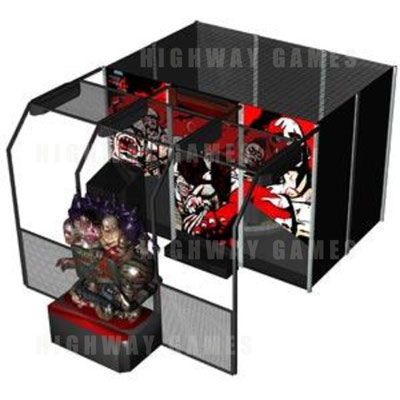 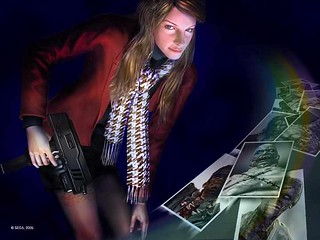 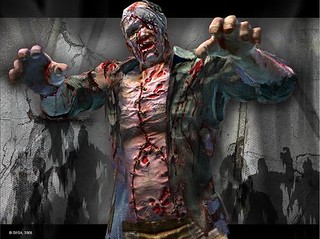 Magazine review  By Alex Kierkegaard (2006)
"We made one more round to see if we missed anything, and we came upon Sega's pimped out House of the Dead 4 Special booth. This is basically a "ride" version of the regular game, which features a 100-inch screen and spins buckled-in players according to in-game events. Interestingly, even though the show was about to end, there was still a long line of people waiting to try it out, which should tell you something. I am definitely spending a few coins on this whenever it comes out.
The pic below is the closest I was able to get. I presume the lady was giving instructions. Because, you know, this is a complicated game.
I also want to mention The Lost World: Jurassic Park Special and The House of the Dead 4: Special, Namco's Galaxian 3, and a fewother special games, which aren't so much cabinets, as they are small buildings. They're badass. HOTD4 Special, for example, is a fairly large, fully enclosed room into which 2 players enter, buckle into the chairs, and are surrounded by 2 100-inch screens on either side, and are blasted by air jets when they're hit by bullets in the game, and the chairs shake and it's got super loud sound and the whole thing is completely fucking CRAZY."

Magazine review  by Ben Kuchera (2006)
"When I first played House of the Dead 4 I had a good time, but it's also pretty hard to screw up the House of the Dead franchise. You see zombies, you shoot them, and if you're willing to put in the quarters you'll see the end of the game. They're fun, but they've gotten so formulaic it's hard to get excited about each new game as it comes out. House of the Dead 4 introduces a few new things, like the automatic gun as standard and the shaking motion you use to reload instead of shooting off-screen. It just didn't feel like enough was done to set it apart from the other games.
Now, since Japan gets all the fun stuff, Sega is introducing House of the Dead 4 special in Japanese arcades. I haven't been able to find any pictures of the game cabinet yet, but the additions are crazy. There's now two screens, one in front and one in back, and you sit in a chair that moves with the game. You get blasted in the face with air whenever you get hit. You get graded on how well you play with the second player. While I doubt the game itself is going to go through a ton of revisions, this almost sounds like a ride instead of a game. I'm really hoping they bring this to the Gameworks where I live.
Increasingly we're seeing regular games with insane cabinets like this to try to lure people into arcades, and I have mixed feelings about it. No matter how much I'm spun around or get things blasted in my face (no comments from the peanut gallery, thanks), we're still basically playing the same arcade games we have been for the past ten years or so. Let's see something really new soon.
Of course, I still want to play this, so I'm probably a hypocrite."

2) The House of the Dead 4 (2005) was the first arcade light gun game to feature a high definition widescreen display.
3) If you get hit the game blasts air in your face and back of neck and the seat spins around so you alternate shooting zombies in front and behind.
4) The House of the Dead 4 is the first game to run on the Sega Lindbergh arcade system board. A PlayStation 3 version featuring support for PlayStation Move and the two stages from The House of the Dead 4 Special was released on April 17, 2012 on the PlayStation Network.
5) In America, there are currently no locations that this version of the game can be seen: The machine at GameWorks in Schaumburg, Illinois, was retired due to constant breakdowns, while the machine that GameWorks in Las Vegas, Nevada, has since been sold to a private collector. This game has also been spotted in Europe, Japan, Brazil, Russia, Dubai, the Macau Fisherman's Wharf, and in Hong Kong Mega Box.
6) IGN said it that House of the dead 4 "may be the most visually impressive arcade game ever made," noting the improved lighting and the zombie and environmental details.
7) Arcade Belgium praised the House of the dead 4 arcade game, including the graphics, noting "thirty or so enemies at the same time" with each "very detailed" and "behaving his own way", as well as "bump mapping (seen for instance on enemies' visible muscles), complex lightning effects such as reflections, particle effects on impact, fog (in the sewers), high polygon counts for each monster, realistic water, and elaborate scenery"

9) Last arcade game on this site.