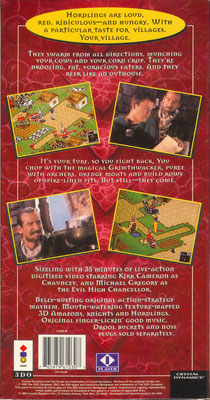 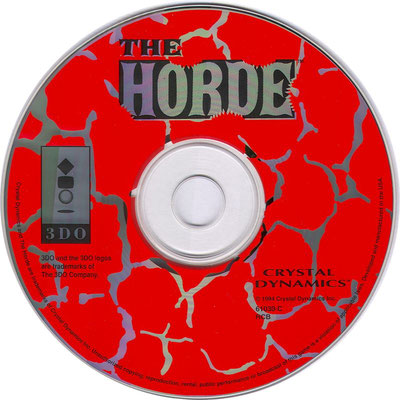 Review - GamePro (1994)
"This imaginative game tries to do something different, and it works. The brain-to-thumb action will keep your head in the game. The Horde deserves a top spot in the 3DO herd. Remember, you Horde it here first."

1) Lead artist Michael Provenza recounted how he designed the "hordlings": "I got some concept drawings before I started, and I was able to model them in a 3D software package. To give each animation personality, I acted out what the hordlings would look like when they did something. For example, the shaman is an old dude. I decided he would walk with a gimp. I grabbed a golf club and walked around the office as I imagined that character would. To get the motion of the walk right, I tried to imagine what it would be like to walk with long arms, short legs, a big body, and a big head. Then I started animating by hand with the 3D modeling software, Alias, and claymation. It takes about four days to build a character from scratch, animate it, and add texture mapping."

2) The original release of the 3DO version contained a bug that erased all other save data on the hard drive when a Horde game was saved. Crystal Dynamics offered to exchange the discs when users mailed in their defective copies.

3) The game makers almost ended up killing one of the game's actors (for real). In one FMV scene, the actor who plays the High Chancellor was supposed to eat a metal key (to reveal he wasn't really human). In order to do this a prop key was constructed out of chocolate sprinkled with cinnamon. Just as the actor was about to bit into the "key" he realized the prop men had made it out of chocolate, which it turns out he was fatally allergic to. The scene was later shot using a key made of carob instead.

4) Actors on the short list to play the main character in the FMV sequences included Jim Carrey and Michael "Kramer" Richards before they were household names. Jim Carrey managed to score a breakthrough movie deal instead, and Michael Richards was an animal rights activist who objected to the depictions of cow killing in the game. Kirk Cameron eventually got the role.
5) The box cover is designed to be a ravenous Hordling's mouth that actually opens and closes. Doesn't fit that well on the shelf, but it is attention-drawing!
6) This game is prefigured in a sense by 1985's Mail Order Monsters nine years earlier, which Paul Reiche III (developer of this game) also worked on. In that game, one campaign mode is entitled "The Horde", with a goal of dispatching a large array of relatively trifling opponents with great rapidity.
7) The game was bundled with the RealMagic MPEG playback card as a demonstration of the card's abilities to play back full motion MPEG video via the card's hardware decoder, at the time software MPEG decoding was not viable due to the lack of processing power in contemporary processors.