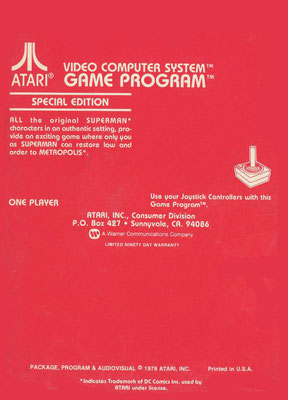 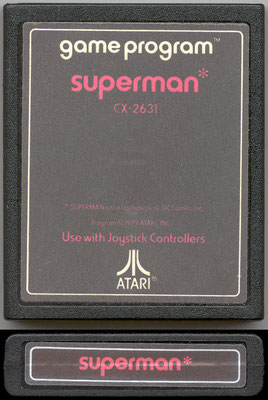 Superman was reviewed in April 1980 by Video magazine in its "Arcade Alley" column where it was highly praised as "usher[ing] in an exciting new era for home arcades". The reviewers suggested that "put simply, there's no other video game remotely similar to this one", comparing the graphics and gameplay as akin to "the complex simulations that have entertained computer freaks for the last decade or so". The game was predicted to be a hit among the "true arcade addicts" and to find a place in the "Video Arcade Hall of Fame".[8]:18 Covered again in Video's 1982 Guide to Electronic Games, Superman was praised for "surprisingly good graphics".[9]:52

Norman Howe reviewed Superman in The Space Gamer No. 31.Howe commented that "this is the best Atari game I have seen yet. It's playable, enthralling, and has excellent graphics. If you don't want to buy the game, at least try to find someone who will let you play it. It's very good."

"Released around the same time as the movie, Superman is one of the more complex games released for the Atari 2600. Consider the following: There are multiple objectives to accomplish (rebuilding the bridge, capturing the criminals and returning to the Daily Planet), and the playing area of Metropolis is made up of 21 different screens and an interconnected subway system containing five screens. The game also contains ten different characters, as well as kryptonite and three different bridge pieces. What's even more amazing is that the game fit onto a 4K ROM and was released in 1979. It's even one of the first games to have a pause feature (press the select switch on the console).

The visual look of Superman is impressive, holding up against games released several years later. While not as detailed as the graphics found in many Activision titles, Superman's characters are colorful and recognizable, and the city backgrounds are drawn in such a way that makes them easy to remember, which is important when you're navigating around Metropolis. While there is no music, the sounds are also well done with an appropriate effect for each event.

The most important feature of the game is the inclusion of a clock that ticks off how many minutes and seconds you've been playing. Trying to beat your best time adds a huge amount of replay value. Without the clock, there would be no reason to play after completing the game once.

From the way Lois lifts her leg when you kiss her, to how the flying sound decreases in volume as you go higher, the game is filled with small touches that really make it something special. The word classic is thrown around pretty casually when talking about videogames, but Superman is one of the few that actually deserves it. (The game's "two-player game" is best described by the manual: "The player using the left Joystick Controller will have priority over the left and right movement of Superman, while the player using the right controller will have priority over up and down movement of Superman.")

Better than average graphics with a large variety of characters and locations.

Simple sound effects with no music.

A superb translation of the comic book fit into the constraints of a 4K cartridge.

Trying to beat your previous time will keep you hooked.

Excellent manual that explains the different features of the game."

2) Superman was built using the prototype code for Warren Robinett's Adventure, and ended up being published before Adventure was finished.

3) Retro Gamer credits it among action-adventure games as the "first to utilize multiple screens as playing area".

5) Superman is the earliest game to feature a Pause option which could be activated by pressing the select switch on the Atari 2600.

6) Developer credits is stored at the end of the ROM - "JOHN DUNN" (name of the game's developer).