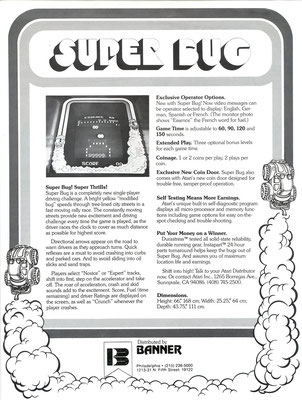 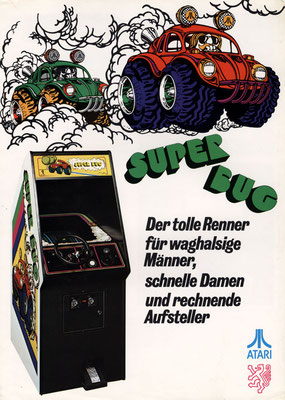 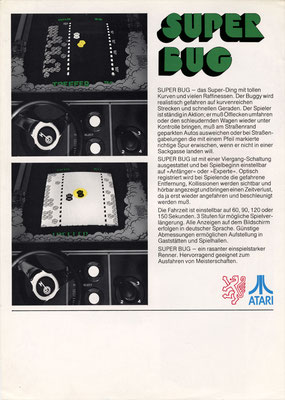 "-In those days, the lines between hardware engineers and programmers were fuzzy.  My first project was the game Super Bug, and I was both the hardware engineer and the programmer.  Since it was my first game, I certainly needed a lot of support, and drew a lot of inspiration from the more experienced engineers. The game was initially called "City Driver".  I was shown some drawings, that I think were done by my first manager, Lyle Rains.  I can't say that I really "picked" that as my first game, but I was excited to be given the chance to develop it.  I'd have to say that every bit of it was challenging, considering that I had never designed a video game before.  I had to learn how the software development systems worked, how to get prototype hardware and printed circuit boards made.  This was far more complex than anything I had designed in school.  And it had to be manufactured without my personal assistance.  I couldn't be in the factory, tweaking each game.  So I had to learn about proper documentation, production testing, purchasing, and all sorts of other things that I had never considered when I was only building one of something.  At the end of the development, which took about nine months, I was quite proud of what I had created, and certainly learned an enormous amount of stuff, both hardware and software.
- According to KLOV entry for Super Bug, this was the first arcade game to feature a scrolling playfield. How hard was it to implement this feature?
Howard Delman: I'll have to take your word that it was the first game with a scrolling playfield. Admittedly, I can't think of a previous example, but it was 35 years ago!
Implementing it didn't seem all that difficult. As I mentioned earlier, I didn't really design the Super Bug hardware from scratch. Since I had never designed video game hardware before, Lyle Rains blocked out the circuits, and I filled in all of the details. I do remember having trouble getting the software to write the data into the proper places in the playfield memory. As the playfield scrolled, so did the memory addresses. But of course, I did finally figure it out. :-)"

1) The player steers a yellow Volkswagen Beetle (or "Bug") along a multidirectionally scrolling track, avoiding the boundaries and occasional obstacle. The game ends when fuel runs out. Super Bug is in black and white, and the colored car comes from a yellow overlay in the center of the monitor.
2) Tank 8 arcade game used same arcade system.
3) Joe Decuir of Atari was writing an Atari 8-bit family version of the game, but it was never finished.

5) Reportedly earlier game with scrolling playfield exist - arcade game "Race" (1976) (from "Fun Games"), but no videos of this game exist on the web to prove that.