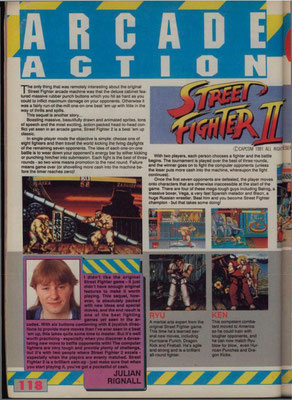 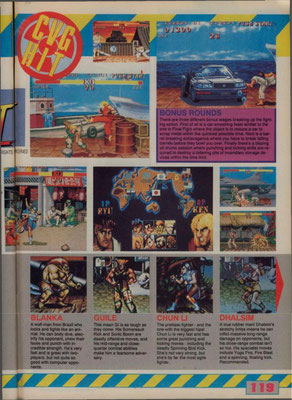 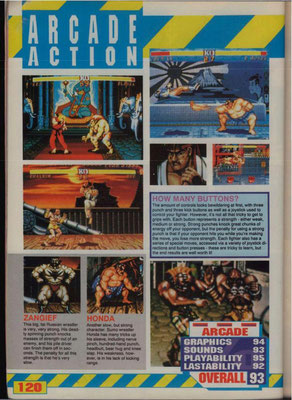 1) Floor animation done in 3D.
2) Blanka special spinning ball move is later inspired Cano and Raiden special moves in Mortal Kombat (1992).
3) A bug in the game's code enabled the player to "cancel" some moves during the animation by
performing another move, allowing for a combination of several basic and special moves. This "combo"
system was later adopted as a standard feature of fighting games, and was expanded upon in subsequent
Street Fighter installments. (altought combos was used earlier in beat'em up game Nekketsu Koha Kunio-kun.
4) Chun Li is notable for being the female video game protagonists.(altought Pit-Fighter (1990) has woman fighter but you can play her only with a cheat). When game was released, most female characters in games existed as objectives to be rescued or cast in the roles of other supporting characters, such as townspeople, girlfriends, the occasional opponent, or simply background decoration. Beyond RPGs, there were very few female heroes in action-based video games. After the success of the game and Chun Li's popularity, female protagonists became more and more common. Since then, in games with selectable characters, at least, there will generally always be one or two selectable female characters.
5) Sheng Long controversy:  Whenever Ryu won a match he would say his trademark phrase just as anyone else, but his was a little more cryptic than the others: "You must defeat Sheng Long to stand a chance". Who the hell is Sheng Long?? That was what most western SF2 players though. The answer as usual was in a botched translation effort: Sheng Long is the chinese pronunciation of Sho-Ryu, as in Sho-Ryu-Ken, aka the Dragon Punch. Ryu was saying that you had to master his technique in order to beat him, but for some odd reason that we'll never know. English, Chinese and Japanese got all mixed up in some poor translator's head and the "Sheng Long" was phonetically transcribed as it was, and coupled with Ryu's cryptic message gave the impression that he was talking about some hidden character.The rumor flew around from day one (among other famous SF2 hoaxes like the one about you being able to ride Guile's Jet or beating up the bystanders in some stages), but it really spread like wildfire when as an april fool's joke "Electronic Gaming Monthly" published an article about how there really was a secret character named Sheng Long unlockable via ungodly gaming prowess (beating all characters in "perfect" matches). Regardless of how ridiculous the rumor was, every kid out there poured coins after coins in the SF2 machines and spent hours in front of the home versions in an effort to unlock said character. The hoax influenced the creation of Gouken character (who looks like Sheng Long) in the Street Fighter series.
6) Zangief's special moves are based on those used by Mike Haggar in another Capcom series, Final Fight. The backstory is that they are friends. Ken and Guile were partly based on Final Fight's Cody.
7) An early name for Zangief during the development stage of the game was Vodka Gobalsky.
8) In many versions, Chun-Li is seen to be wearing a thong under her dress. This was censored in the SNES version. see picture below.