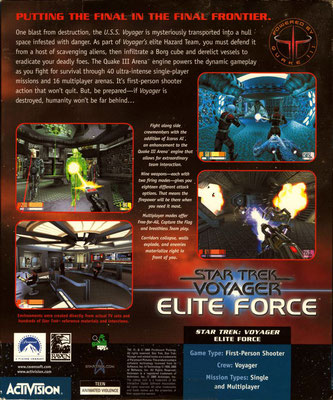 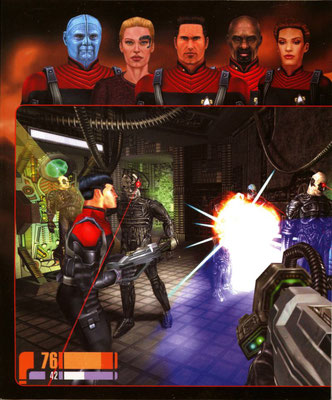 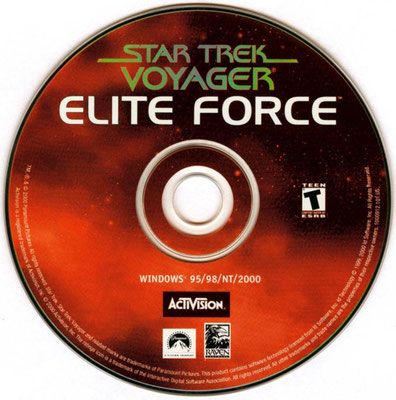 Magazine review - Adrenaline Vault  (2000)
"I sometimes get e-mail from readers wondering which are the toughest games to write about--great ones or terrible ones. The answer is neither. The most difficult-to-review titles are those that impact me on an emotional level, much in the same manner that reading a good novel or seeing a great movie does. The new first-person shooter, Elite Force, falls into that category. I used overpowering weapons to annihilate aliens, stared slack-jawed at the screen in awe of its beautiful graphics, scribbled down 18 pages of notes, and now I am at a loss as to how to write the review. All the usual critical categories seem to collapse in the face of a game that stirs our feelings as much as it challenges our minds and stimulates our senses. Still, a reviewer must scrutinize the details, so I will steel myself, Vulcan-like, to the task at hand.
Star Trek Voyager: Elite Force ScreenshotIt almost seems obligatory to mention the disappointing lineage of “Star Trek” games and pose the ageless question: Is this the title that will rip through the creative barriers and produce excitement? I have always thought that approach sets up a product for failure with an almost implicit, “Of course not.” Where “Star Trek” games have disappointed in the past was in the translation of the characters and their significance to the events that surround them. Paramount, publisher Activision and renowned design studio Raven Software did not set themselves up for this same self-propelling failure; rather, the trio selected all the right ingredients from the start, including a strong script, a great cast of characters, a leading-edge game engine, and a gameplay model ripe for action. The first title based on the “Star Trek Voyager” universe, Elite Force sends people into battle against a multitude of enemies, including the unmerciful Borg and never-before-seen aliens.
Long-time followers of the films and various TV series will appreciate the significance of the game’s story, but Elite Force was also designed to appeal to action fans, regardless of their understanding of the franchise. Therefore, a brief exposition is in order: The plot begins in the far-off Delta Quadrant with the Voyager crew on a continuing mission to return to Earth. Without the aid of Starfleet and other reinforcements, the ship’s senior officers created a small elite force of crewmembers with superior abilities for handling extreme crises. Overseen at the hand of Lt. Tuvok, this S.W.A.T.-like detachment, labeled the Hazard Team, is the ship's lifeline. As Ensign Munro, players are second in command of this unit. The game begins with the ship responding to a distress signal from an abandoned vessel. Problems ensue when the space craft springs to life, firing upon the ship and triggering a sequence of events that transports it to a dead zone, hanging motionless and crippled in space with countless other starships. The situation is custom-made for the elite team, which is sent on a series of missions inside the other ships to collect information, gather supplies and untangle a deepening mystery in an attempt to escape.
Star Trek Voyager: Elite Force ScreenshotRaven has gone to great lengths to recreate the popular "Star Trek" universe in precise detail, both in terms of the game's visuals and how the action is structured. In-between missions, Munro has a number of duties to perform on the ship, which is modeled after the one used in the TV show. These include attending mission briefings, testing new weapons in the Holodeck, meeting up with squad members and so on. All the primary locations from the show were incorporated into the design; from the Federation issue uniforms to the textures that adorn the walls, the attention to detail is thorough. Most missions then begin with a jaunt to the Transporter room and a glittering send-off. A multitude of characters from the show populate these sequences, such as Captain Janeway and the Holo Doctor, lending an even more natural feel to the proceedings. Despite being nothing more than a casual fan, I still experienced a nerdy thrill when walking the corridors of the ship in real-time, soaking up the “Star Trek” ambiance."

Trivia:
1) Star Trek: Voyager - Elite Force is a first-person shooter that uses the Quake 3 engine. It's game version of  show by same name. The different types of missions range from pure combat to stealth missions. The enemies include many well-known Star Trek races like the Borg or the Klingons, but also other alien races and creatures invented specifically for this game.
2) When the game was first released, actor Jeri Ryan wasn't available to do the voice-overs, and a sound-alike was used. All other TV cast members contributed their own voice to their cyber-counterparts. Jeri's voice was added in the latest official V1.2 patch.
3) Devon Raymond, the woman who does the voice for Alexandria Munroe, also appears in the Voyager TV series finale as a cadet.
4) Because of Paramount licensing requirements, the game was developed so none of the TV characters would be killed. Raven opted to create the Elite Force in compliance of the requirement.
5) The alternate federation you encounter mid-game is taken from the "Mirror, Mirror" episode of the original Star Trek series, in which captain Kirk got trapped in an alternate universe where the federation is actually an evil dictatorial conglomerate.
6) Whether you play as a man or a woman, you end up being flirted with by a female character. This is almost certainly an oversight by the programmers, and is ironic as the Star Trek lineage has usually shied away from having overtly homosexual characters. The series' original creator Gene Roddenberry was reportedly in favor of the idea, note that the various Star Trek series have often been ahead of their time in having a multiracial cast. Other members of the staff (especially Executive Producer Rick Berman) had ruled against diverse orientations.

7) Anisotropic filtering is a method of enhancing the image quality of textures on surfaces of computer graphics that are at oblique viewing angles with respect to the camera where the projection of the texture (not the polygon or other primitive on which it is rendered) appears to be non-orthogonal (thus the origin of the word: "an" for not, "iso" for same, and "tropic" from tropism, relating to direction; anisotropic filtering does not filter the same in every direction).