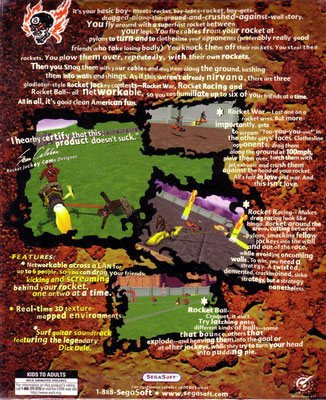 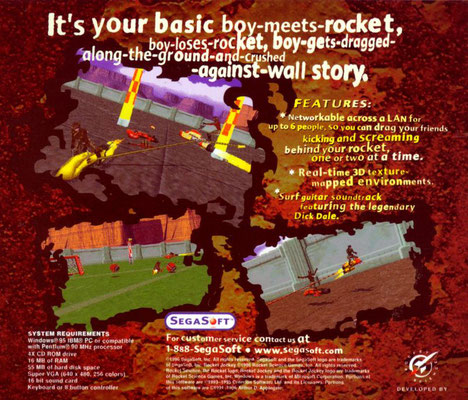 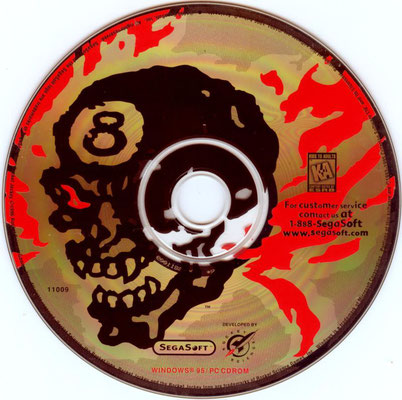 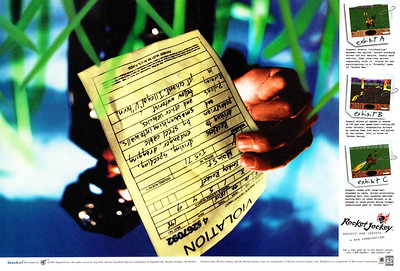 Earliest review - Computer Games Magazine (1996)
Ultimately frustrating, all that can be said is that Rocket Jockey could have been one of the better action games of the year. The gameplay is exciting and the concept original, but the overall judgment of the game is severely impacted by technical glitches, poor support and, with promised network play promised as a patch, a feeling of being rushed out the door to cash in on the holiday feeding frenzy.

1) Ragdoll physics is a type of procedural animation that is often used as a replacement for traditional static death animations in video games and animated films.Early video games used manually created animations for characters' death sequences. This had the advantage of low CPU utilization, as the data needed to animate a "dying" character was chosen from a set number of pre-drawn frames. As computers increased in power, it became possible to do limited real-time physical simulations. A ragdoll is therefore a collection of multiple rigid bodies (each of which is ordinarily tied to a bone in the graphics engine's skeletal animation system) tied together by a system of constraints that restrict how the bones may move relative to each other.

3) A PlayStation version was planned but was never released.

4) In 2019, a free, single dev, remake was made using the Unity Engine, The game has two new maps remade from the old game with new physics and similar style, The game also has support for the original levels and is still being updated.

5) Game failed to generate the sales needed to justify costs, despite a high level of pre-release excitement. As a result, the company could not secure funding from a publisher to develop another game, and was forced to close in April 1997.
6) Rocket Jockey was a finalist for CNET Gamecenter's 1996 "Best Action Game" award, which ultimately went to Quake. The editors wrote, "Rocket Jockey accomplished the impossible: it brought us a completely original gaming experience by breathing new life into two game genres that have been done to death, first-person action and racing combat."