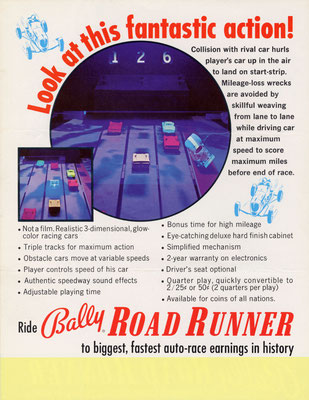 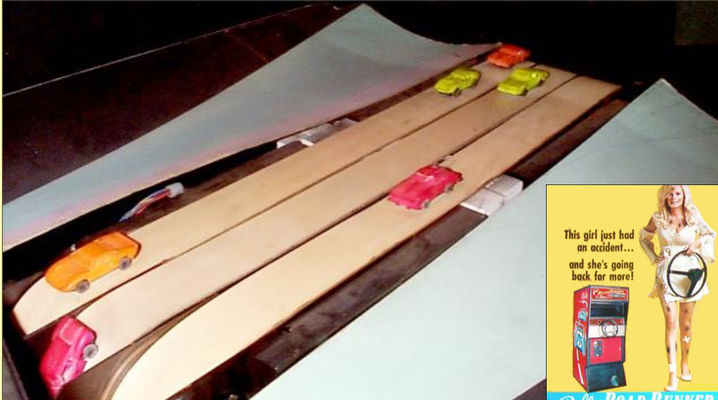 Poster and photo of arcade cabinet inside

1) In august 1971, Bally  released  a  game  which  would prove  to  be  very  popular  with  players  of  the time  (along  with standart electro-mechanical Chicago Coin arcade games). Road Runner is a game where your own car was a holographic image and you would avoid other miniature cars on the mechanical strip as they moved toward you.

2) Holographic effect was achieved by player vehicle's image is reflected using a half silvered mirror in front of three belt tracks that move cars forwards and backwards.

3) A hologram is a real world recording of an interference pattern which uses diffraction to reproduce a 3D light field, resulting in an image which still has the depth, parallax, and other properties of the original scene. A hologram is a photographic recording of a light field, rather than an image formed by a lens. The holographic medium, for example the object produced by a holographic process (which may be referred to as a hologram) is usually unintelligible when viewed under diffuse ambient light. It is an encoding of the light field as an interference pattern of variations in the opacity, density, or surface profile of the photographic medium. When suitably lit, the interference pattern diffracts the light into an accurate reproduction of the original light field, and the objects that were in it exhibit visual depth cues such as parallax and perspective that change realistically with the different angles of viewing.