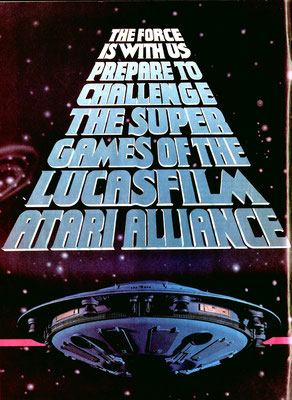 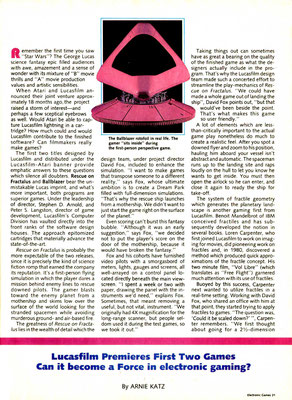 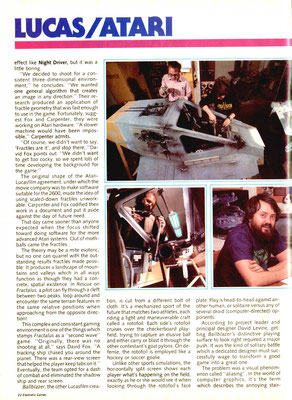 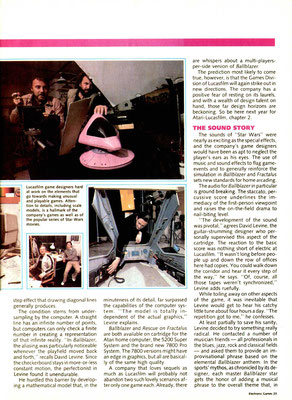 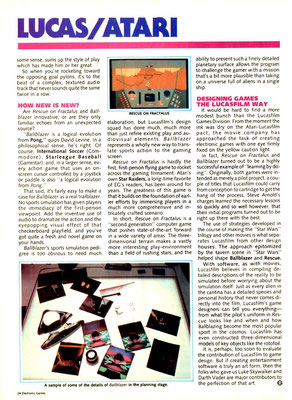 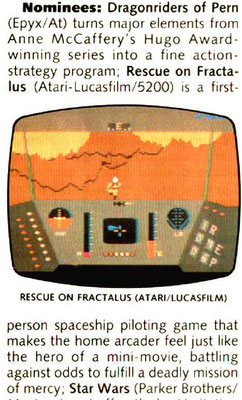 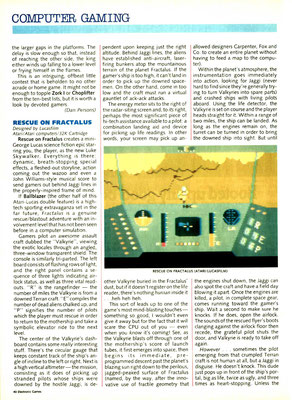 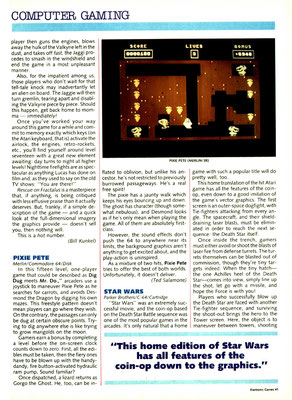 Trivia:
1) First flight game, where you can observe not only empty air, but mountain and complex landscape -
The game utilizes fractal technology to create the craggy mountains of an alien planet, where the visilibility was drastically reduced by the dense atmosphere. The player controls a fictional "Valkyrie" space fighter (converted for search and rescue duty) from a first-person view, attempting to land and pick up downed Ethercorps pilots.

2) As an amusing twist on this relatively straightforward premise, added at the suggestion of George Lucas,some of the "pilots in distress" are actually hostile aliens in disguise. After landing near a downed pilot, the player watches him run off-screen, and then has to wait for several tense seconds—if it were human, the familiar, frantic "tap-tap" noise would be heard from the ship's hatch; otherwise, the alien Jaggi would suddenly jump back into view, sans helmet, roaring and trying to smash into the cockpit. Unless the player restores the ship's shields, the windscreen cracks open and the pilot is killed. Likewise, inadvertently letting a Jaggi pilot into the player's ship has disastrous results - it begins to dismantle the ship. In early levels, the Jaggi can be distinguished by their green heads versus the white human helmets. However, in later levels the aliens evidently learn to wear the human helmet and become identical in appearance. This, along with an unpredictable pause between the human/alien approach and the tap-tap/alien jump makes for a very tense experience. According to head developer David Fox, this shock moment made Rescue on Fractalus! "the first computer game to really scare people".
3) The game was one of the first two products from the fledgling Lucasfilm Computer Division.
4) Prior to release, Rescue on Fractalus! was named "Behind Jaggi Lines!" during development. This name refers both to the Jaggis, the fictional race of hostile aliens in the game, as well as the lack of spatial anti-aliasing in the game's graphics, resulting in jagged diagonal (or curved) lines, colloquially known as "jaggies".

5) Rescue comes from the time when Atari (and others) would not allow game developers to have credit in their games, so like many games of that era credits were hidden inside the game.
6) According to designer David Fox, the game was originally meant to be set in the Star Wars universe. However, Lucasfilm Ltd. did not allow this because at the time the real money was earned with licensing fees.