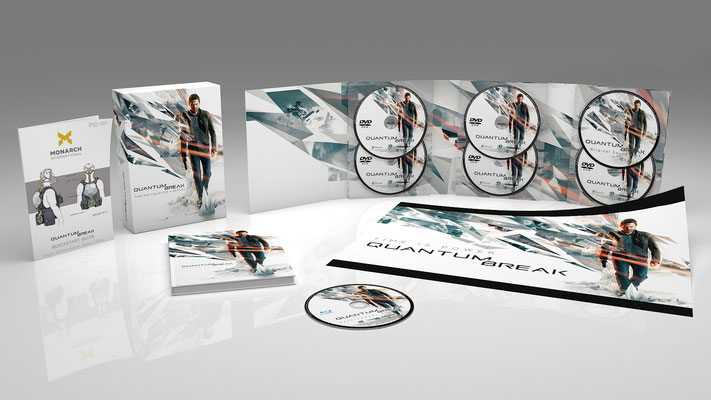 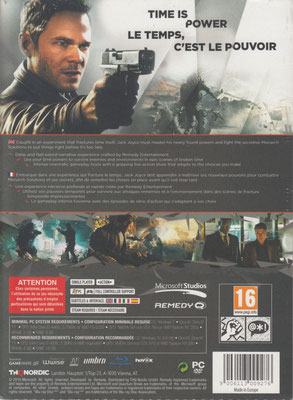 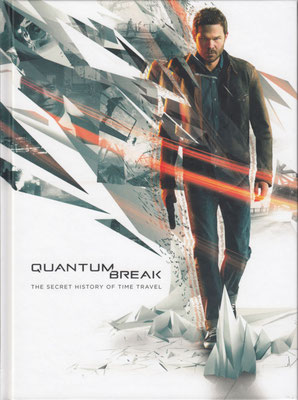 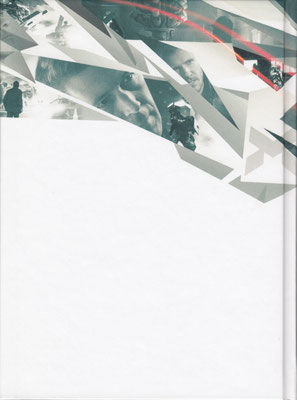 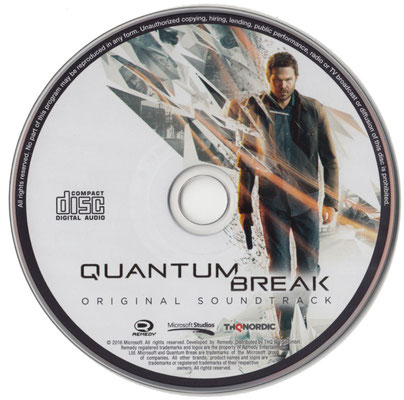 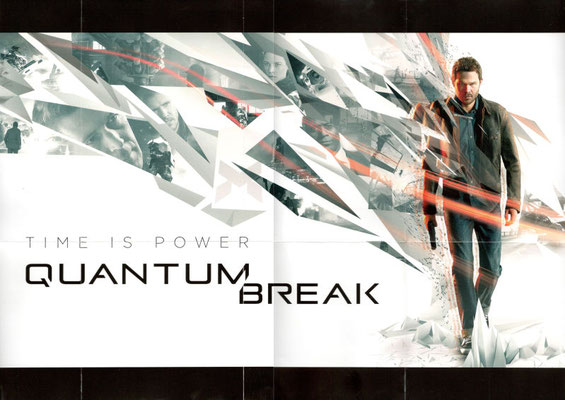 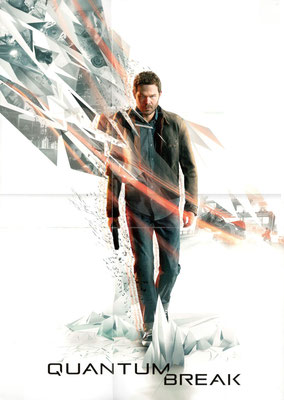 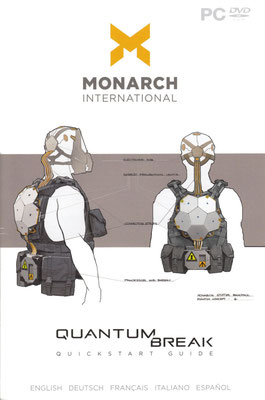 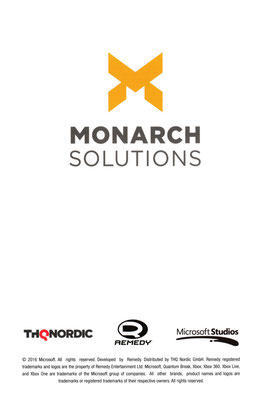 "Time is on your side in this stylish, story-driven shooter from the House of Payne.

By Tristan Ogilvie The main characters of Quantum Break may frequently find themselves stuck in time, yet developer Remedy Entertainment appears to have no such problem. The team behind Max Payne and Alan Wake has successfully managed to evolve its signature style of cinematic shoot-’em-up for its latest release; seamlessly melding digital gunplay and TV-inspired storytelling without compromising the quality of either side of the experience. While I wish the combat stakes had been raised a little higher in its second half, Quantum Break remains a stylish and often-exhilarating third-person shooter wrapped up in a tautly paced tale of time travel.

Consisting of five gameplay acts interspersed with four breakneck-paced episodes of a live-action TV-style show, Quantum Break opens - as so many great sci-fi stories do - with a catastrophic accident in a research lab, one that creates a potentially world-ending fracture in time and imbues (or perhaps, infects) both the hero and his chief antagonist with time-bending powers.

In the hands of hero Jack Joyce, this satisfying suite of superpowers work in tandem with more traditional cover-based shooter mechanics to take the bullet time of Remedy’s original Max Payne games to... Well, the max. Joyce can blink-teleport from one side of the room to the other, slowing down time long enough to blindside an enemy with a shotgun blast. He can momentarily suspend an enemy in a time bubble, unload a full submachine gun clip into it, and allow the bubble to burst so that two dozen headshots all arrive at once. He can create an impenetrable time shield, sprint past sniper fire like the Flash, and even charge up and hurl ‘time bombs’ to scatter groups of enemies like shrieking dandelion spores. The downside to such a range is that half a dozen different cooldown timers on screen are easily mixed up during the heat of a battle.

While it’s still grounded amidst the typical shooter tropes - every warehouse area seems to have taken a fresh delivery from Acme Explosive Barrel Company, for example - Quantum Break does facilitate some truly unique playgrounds for its time-stopping action to unfold in. Frequent stutters in time create eye-popping dioramas out of the destruction around you. Dispatched enemies cartwheel back from bullet impacts and freeze in midair, the bloodspray from their exit wounds crystallizing in the air like icicles of claret. Out-of-control cars become trapped in an infinite instant replay as they crash, rewind, and crash again. Innocent bystanders are caught in a state of suspended animation, their morning coffee spilling into a frozen arc in front of their stunned faces. It’s a unique and wonderfully eerie environment to inhabit - like wandering around inside a 3D screenshot - and certainly a stylish space in which to live out your every violent, Wachowski-inspired whim.

The only problem is that Jack goes from unassuming everyman to heat-packing superhero in the space of the first few hours, and his relatively rapid ascent to gun-toting Time Lord is to Quantum Break’s slight detriment as a whole. Since it seems to be in such a rush to give you all these neat powers up front, it leaves nothing new in reserve for the entire second half, which means the initial freshness of these frozen-in-time firefights starts to feel somewhat stale long before you reach the conclusion after 10 hours.

Some measures are taken to spice things up along the way, such as the introduction of enemies that can teleport like Joyce, and of course the obligatory tank-like troops who turn up to soak up an obnoxiously above-average amount of bullets, but for the most part your tactics remain the same right up to and including the final confrontation. While there is a superficial upgrade system that incrementally improves Joyce’s existing powers, I wish the introduction of the powers themselves had been spread out over Quantum Break’s duration to offer a more gradual sense of character progression. Failing that, it’s a shame there aren’t more interesting new ways to use his powers in the later levels in order to evolve the action a bit more in the second half. As it is, it’s a case of too much too soon, and it eventually becomes a touch repetitive.

What kept me playing despite the waning combat novelty was the strength of Quantum Break’s story, and the method by which it’s told. Tales of time travel are inherently paradoxical, but Quantum Break’s spin on the idea serves up some meaty twists and turns without ever becoming convoluted.

Part of that is due to the way that at the end of each gameplay act a ‘juncture’ occurs, wherein you’re temporarily given control of the villain, Paul Serene. Serene has the ability to foresee the consequences of his actions, and thus you’re given a choice between two outcomes that will directly impact the subsequent episode of the live-action series, and have later in-game ramifications. These choices are never black and white, and adding to their complexity is the fact you have to weigh up how they’ll impact both Quantum Break’s heroes, and villains. For example, after the initial accident at the university you’re given the choice of creating a smear campaign to make Joyce look like a terrorist in the media, or alternatively slaughtering the students protesting the closure of the campus library and making the public fear Serene’s Monarch corporation. Continues

Generally speaking, these juncture decisions only change a scene or two in the live-action episode that immediately follows, but in the long run you get to directly influence the fate of a number of the supporting cast. To be clear, Quantum Break doesn’t remotely rival the sort of branching complexity of something like Until Dawn, and indeed no matter which combination of choices you make along the way, you ultimately always arrive at the same conclusion. However, there are enough variances in dialogue, environmental detail, and character involvement that I found embarking on a second playthrough and making different choices was well worth the effort.

And what of the four live-action segments themselves? Well, any concerns about them coming across like hokey FMV cutscenes from the 32-bit era are quickly quashed; Quantum Break features a level of production and performances to rival the best original programming currently found on the big-name streaming services (not to mention some familiar faces from the likes of Game of Thrones and The Wire). Sitting and watching for 20-30 minutes at a time sounds like a long time to put your controller down (unless you’re a Metal Gear diehard), but it wasn’t nearly as disruptive as I’d feared. With their abundance of dramatic confrontations, high-speed car chases, and shaky-cam scraps, the hurried pacing of these segments kept me happily watching while my trigger fingers were temporarily on ice.

Most importantly, these segments successfully serve to humanise the villains, and not merely because they’re played by real-life actors. There’s the conflicted super soldier with the pregnant wife at home, the IT surveillance geek keen to climb the corporate ladder, and the company CEO locked in an internal struggle for power with Serene. Once an episode ends you return to pulverising wave after wave of faceless Monarch soldiers, so it’s not like this switch in perspective makes you think twice about Joyce’s actions (and certainly you’re never given any opportunity to not kill everybody you encounter) - but at the very least it gives a refreshing degree of context rarely afforded to the evildoers within the shooter genre.

The only downside to Quantum Break’s live-action portion is the fact that the episodes are streamed online - meaning you’re at the mercy of your home internet connection as far as the quality of the playback is concerned. Disruptive content buffering was a fairly regular occurrence during my two playthroughs, as were graphical issues during the gameplay sections such as screen tearing and noticeable texture pop-in. I can only assume that these are all forms of glitches and time stutters that the developer didn’t intend.

Quantum Break is an artistically distinct shooter, with a compelling and malleable plot and excellent performances from its main players in both their digital and live-action forms. While I wish more thought had gone into maintaining the thrill of discovering its time-twisting powers from start to finish, it ultimately didn’t prevent me from thoroughly enjoying Quantum Break’s 10-hour campaign, two times over."

1) One of the first games where in-game realtime graphics is as realistic as cutscenes (along with L.A. Noire).

2) A standalone Windows version, released through Steam, and the physical Timeless Collector's Edition (which includes a development documentary, a book detailing the game's development, a soundtrack CD, and posters) was released on 29 September 2016. Unlike original Windows Store version, it supports Windows 7 and 64-bit platforms.

3) The game originally was envisioned as a sequel to company Remedy's previous game, Alan Wake. The game's focus was shifted to time travel, as Microsoft wanted a new intellectual property with interactive storytelling. The team consulted scientists while creating the fictional science in this game. While the video game portion was developed internally by Remedy and directed by studio veteran Sam Lake (Max Payne). Quantum Break is the first game directed by Sam Lake, the TV part (live action cut scenes) of the game was developed by Lifeboat Productions.

5) Quantum Break was the best-selling new intellectual property published by Microsoft since the launch of Xbox One.

7) Greg Louden, who received an Academy Award for Visual Effects for his CGI work in innovative film "Gravity", served as a narrative designer.

8) The developer's team drew numerous inspirations from pop culture and included various references to films like Inception and Interstellar. The team was also inspired by The Matrix, The Terminator movies, Back to the Future, Primer and Looper.