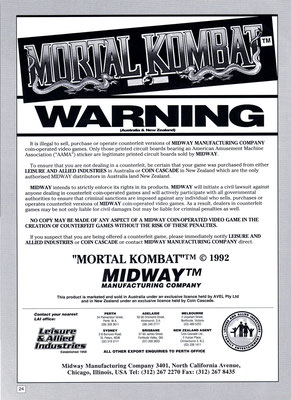 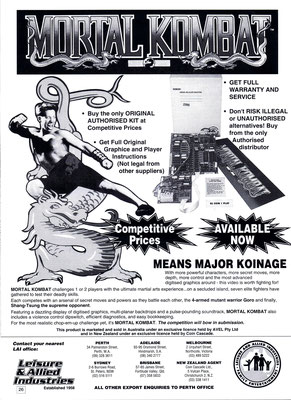 Trivia:
1) On March 31, 1994, game  with the exception of the Game Boy version, was put on the infamous German index by the BPjS (Federal Department for Media Harmful to Young Persons) -that means it's illegal to sell it in the country. In addition to the indexing, on November 11, 1994, the SEGA Mega Drive, SEGA CD, SEGA Master System, and Game Gear versions were also confiscated for violating §131 of Germany's penal code (for showing cruel violence against humans, etc.) However, due to the 10 year limitation for confiscations, those four versions are no longer confiscated since November 11, 2004. It was a first game added to Germany Criminal Code confiscations (131: Excess Violence)- the consequences of confiscation go beyond being listed on the BPjM's Index: it is illegal to sell the item (not only to minors, but to all adults), to own it with the intent of selling, to publicly present it and more. It is not illegal, however, to simply own it and use it in the privacy of one's home.   First banned game from minors was Softporn Adventure, first banned game was Chiller.

2) The original name for the character Sub-Zero was Tundra.
3) Johnny Cage's real name is John Carlton (according to the game's storyline). The name was taken from the Midway game programmer John Carlton, who worked for the NBA Jam arcade series.
4) The original name for the character Goro was Gongoro. According to John Tobias, the team decided to shorten it.
5) According to Ed Boon, the main characters are all caricatures of some of their favorite characters from martial arts and sci-fi movies: Kano, with his infra-red eye, is based on Arnold Schwarzenegger's make-up in The Terminator. Liu Kang is, obviously, the likeness of Bruce Lee. Raiden, the electric God of thunder, is based on the lightening-wielding character from "Big Trouble in Little China" movie. Sonya was loosely based on martial arts star Cynthia Rothrock. Cage based on actor Jean-Claude Van Damme.
6) The arcade version is extremely graphic and gory. When it was released to the first four home systems (Super Nintendo, Game Boy, Sega Genesis, and Game Gear), all the elements of gore were removed (blood, fatalies, etc.) so Genesis and Game Gear could receive SEGA's "MA-13" rating and Super Nintendo and Game Boy would fit Nintendo's censorship guidelines (Nintendo had no game rating system and the Entertainment Software Rating Board (ESRB) would be established two years later). When the blood was removed from the SNES version and Game Boy Version, it was replaced with sweat and fatalities for all versions were modified so there was no gore. The Sega versions though had a secret code that could convert the game into an "MA-17" version with all gore intact.
7) The code for this game includes the ASCII string 'NOOBSAIBOT' (originally in "Mortal Kombat II" revision 3.1), suggesting that the character may have made his first appearance here, instead of Reptile (which took up less memory).
8) While fighting on the Pit stage, if you look closely at the glowing moon in the background, you will sometimes see a silhouette fly past it. These shadows will either be Peter Pan and the Darling children, a witch on a broomstick, a kite, a blimp, a rocket, a flying saucer, or Santa Claus in his reindeer-pulled sleigh. The shadows appear about every 6 games.
9) Michael Jackson used to own this game. It was sold at the official Michael Jackson Auction on April 24, 2009.

10) Reptile: On November 1992, while preparing an upgrade to fix several bugs, Ed Boon shut himself in his office for a weekend and added the secret character Reptile all by himself. However, no indication was ever given of his existence. It wasn't until a later revision of the game (which added Reptile popping up before matches to give clues of his existence in the game) and a July 1993 VideoGames Magazine article in which Boon and Tobias specifically clarified how to find Reptile, that the mass public became aware of the existence of a character that was already in the game for months. In Mortal Kombat 2 he is playable character.

11) Game is a catalyst to the implementation of a rating system.

12) In some versions of the game ERMAC flashes onscreen. This is an error message (ERror MACro) that was not removed but many people believed it was a secret character. The developers denied that he existed in Mortal Kombat 2 with one of the jumbled messages that appeared at the bottom of the screen after beating the game: CEAMR ODSE NTO EXITS (an anagram of "Ermac does not exist"), and the occasional appearance of the secret character Jade with the message "Ermac Who?" Though Midway included a scrambled message in the Mortal Kombat 2, that read "Ermac does not exist", neither Boon nor Midway company marketing director Roger Sharpe denied outright the character's presence in the game. In October 1995, two years after the EGM incident, Ermac was added to the selectable roster of Ultimate Mortal Kombat 3 (1995; an upgrade of Mortal Kombat 3), as the developers felt that he had transformed from myth to urban legend and therefore warranted his inclusion in the series.

13) Mortal Kombat was one of the games Senator Joseph Lieberman centered his arguments on during the 1993 investigation by the United States Congress on extreme violence in video games. The investigation caused SEGA to develop the Video Game Council, which would later evolve to the Entertainment Standards Review Board (ESRB). Since then, even with the ESRB, video games have actually increased in violence.

14) This game specifically is credited for making Nintendo change their no-violence policies and generally "giving some slack" in what regards their strict content control policies. The game's violence was censored in Japan. The reason: the SNES port of Mortal Kombat is censored beyond belief, almost to the point of making it a collector's item since the modifications go as far as making completely new finishing moves (Raiden burns his opponent to harmless ashes instead of making his head explode, Sub-Zero deep freezes his enemy and then breaks him instead of pulling out his spine, etc.). As a result of this Nintendo lost millions of dollars in what is arguably one of the best-selling videogames ever and missed out on a title that became a certified blockbuster in all its other incarnations (by way of comparison the Genesis port of the game outsold the SNES port by approximately 6 to 1). Another instance of Nintendo's extreme censoring practices: in Sub-Zero's ending, his purpose for entering the tournament is the assassination of one of the characters. In the SNES version, however, the word "assassination" is changed to "destruction". After that, Nintendo decided to allow depictions of blood and Fatalities in Mortal Kombat 2.