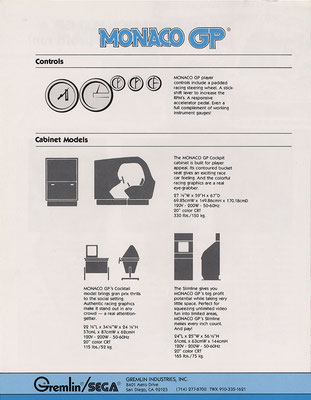 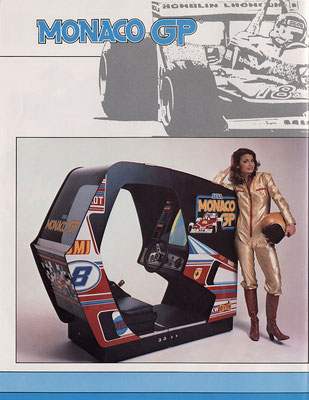 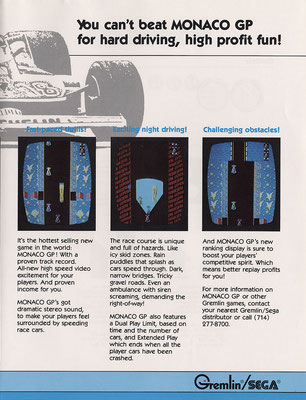 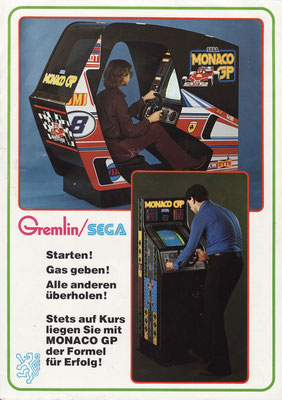 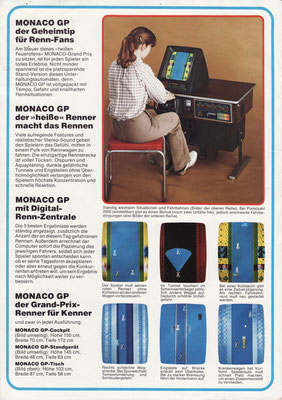 2) All of the scoring information appears on various LEDs located on the cabinet, including the player's score, the high score table, and the timer (Turbo, an arcade game released by Sega two-years later, presents scores in a similar style; the timer is presented on-screen).

3) The game does not have a CPU; it was the final game (not counting the updated version) made by Sega to use TTL-based discrete logic circuits (thus it is not currently supported by processor-based game emulators such as MAME). Images such as the cars and "game over" message are stored in small custom ROM chips. Sound effects, such as the cars' engines, a siren, and the sound of wheels slipping on the pavement, are generated by operational amplifiers and other analog circuitry.

7) Reviews: Initially displayed at the Japan Amusement Association show in Tokyo in 1979, Monaco GP received a positive reception at its debut. Sega chairman David Rosen called the game's warm reception at the show evidence of the world's growing acceptance of coin-operated arcade games. Monaco GP became highly successful in arcades. Cashbox magazine labeled the game the most popular arcade driving game in the US in 1981, and it was among the highest-grossing games of the year. The game appeared on the monthly sales chart of RePlay magazine from April 1980 until April 1987, a record number of appearances, to which Namco's Galaga was the next closest to reaching. Game Machine listed Monaco GP on their July 15, 1983 issue as being the fifth most-popular upright arcade unit in Japan at the time.