Advanced motion capture - "MotionScan" technology that utilizes 32 cameras to record an actor's every wince, swallow, and blink which is then transferred to in-game animation 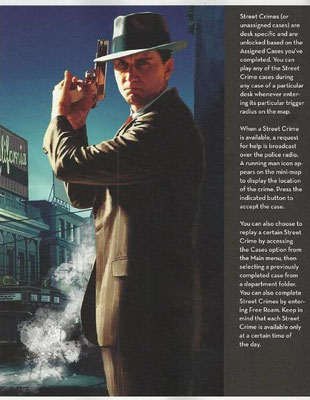 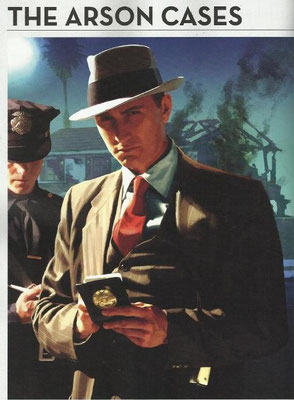 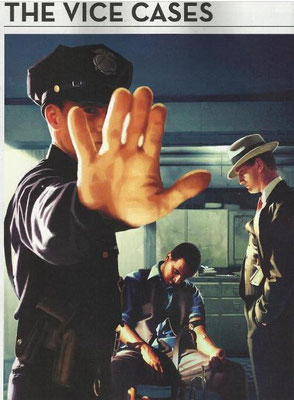 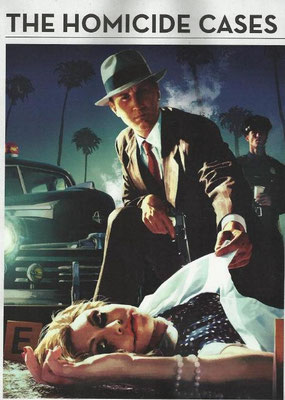 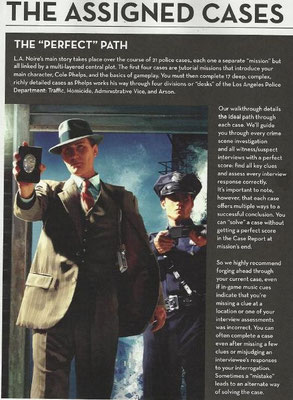 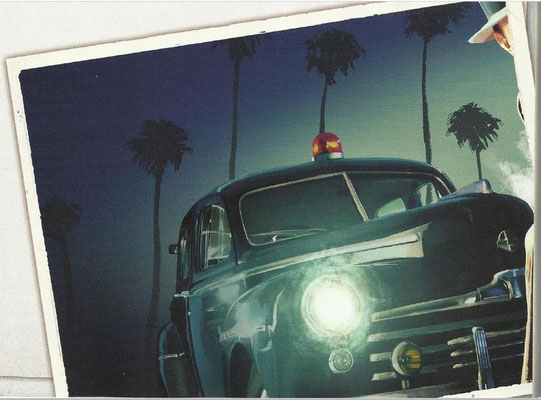 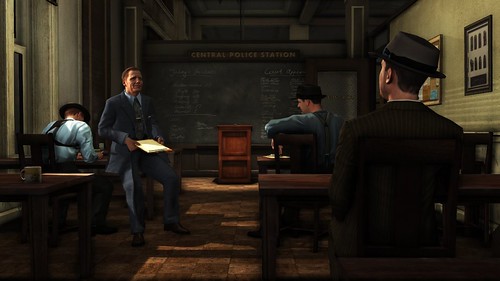 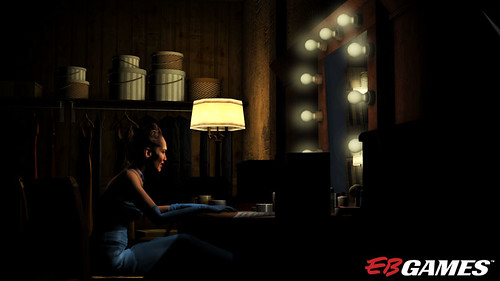 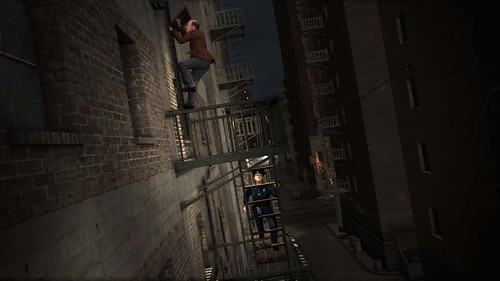 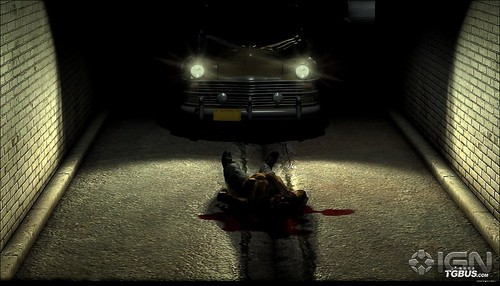 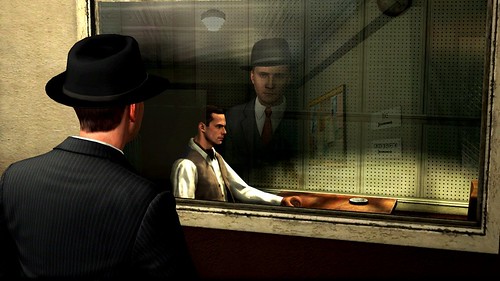 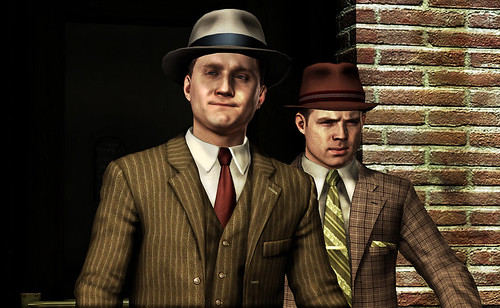 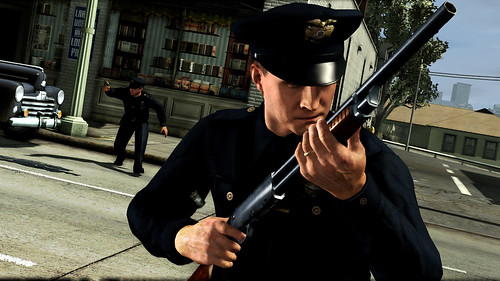 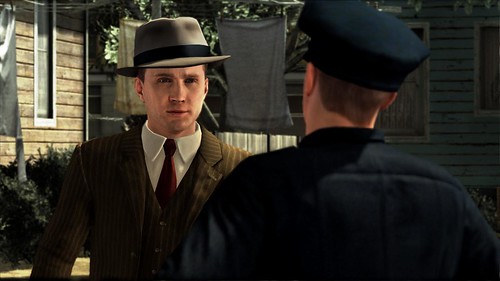 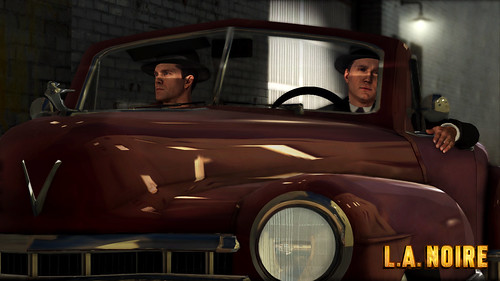 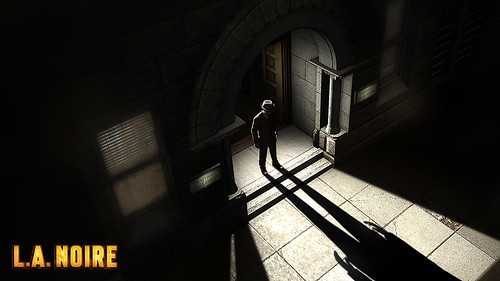 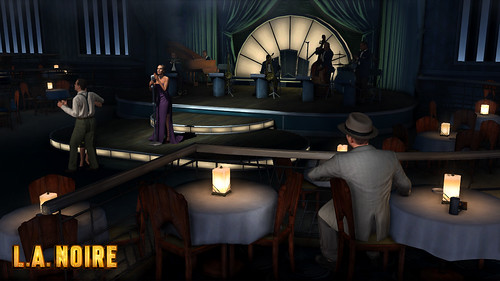 Earliest Magazine Review- Electricpig (2011)
"LA Noire is a remarkable gear change for Rockstar, which for some years has relied on its Grand Theft Auto franchise and shoot-in-face-then-steal-car/horse gameplay mechanics. It’s languid, it’s smart and it doesn’t resort to flapping genitalia for laughs. But does a slow burning mystery make for a fun weekend when you could be killing people in Black Ops instead? We’ve been playing the game ahead of release: read on for our LA Noire review and our findings.
LA Noire has been in the pipeline for a very long time – more than seven years in fact – and if you’ve been following our early previews of the detective game, you’ll know this is not your traditional Rockstar sandbox game. Granted, 1947 LA is vast and beautiful, with storm drains and tarmac sweeping off into the shimmering horizon in every direction, but for the most part you’ll follow a route directed by the evidence you turn up and suspects and witnesses you talk to.
Are you down with that? That’s something you’ll have to decide very early on, as after a short tutorial mission showing you the ropes, you’re thrown into cases, episodic missions that can take anywhere from 20 minutes to two hours. The over-arching story is teased in between these, but at the start, your bread and butter is walking around crime scenes (abandoned vehicles, murders) looking for clues, signalled by audio clues and gamepad rumblings, interrogating LA’s lowlives and leafing through your notebook, which is automatically populated with the clues you find.
That’s far more compelling than it sounds. Visually, the game is beautiful. We tested the PS3 version of LA Noire (which comes with an extra case), and we can honestly say that it’s on a par with the very best we’ve seen recently, from Crysis 2 to Gran Turismo 5 – and we don’t expect the Xbox 360 version to look inferior.
More importantly though, it’s the MotionScan technology that makes note of every actor’s gulps, nervous glances, tics and nuances to really make the interrogations immersive. And they are: aside from the fact that every human actor is instantly recognisable (Mad Men’s Aaron Staton plays the protagonist, war veteran turned LAPD detective Cole Phelps), trying to judge persons of interests is a gaming experience like you’ve never, ever seen.
The potential for MotionScan (Technology licensed from a separate Australian company) in gaming is phenomenal. RPG makers Bethesda and Obsidian have a particular reputation for wonky facial animation, but this could add a stunning level of sincerity, reality, to every title you play, from a new Halo to Grand Theft Auto 5.
While you can replay cases, if you judge a suspect’s response wrongly, there’s no going back: assume someone is telling the truth and a vital piece of information will be withheld. Dialogue takes on a new level of importance: you can’t check your phone in a cut scene, lest you get sent round the houses.
You’ll get there in the end of course, and yet, despite this lack of perceived challenge, you’ll still relish the experience. That’s because the period Los Angeles setting and world you’re submerged in is nothing short of sensational.
Rockstar hasn’t developed this game internally: instead, Australian Team Bondi have built this title from the ground up, which no doubt accounts for the distinctly new flavour of gameplay. That said, the game is still marked with the stamp of the Houser brothers, the British public schoolboys who turned Grand Theft Auto into a global phenomenon, and executive produced on this. There’s the same relish for mis en scene, as well as the odd puerile gag thrown in for old time’s sake. Searching through the clutter of a movie producer’s apartment, Phelps finds an award for the film “Gay Cowboys”.
LA Noire is fascinating, but there are still problems with control and structure. Whoever decided to make the run button the shoot button as well (Phelps will sometimes be called upon to open fire) should be given their marching orders. It’s also not always clear whether you should doubt or accuse a POI: in one instance, we knew a witness was lying about a car running over a pedestrian at full speed because of tyre brake marks on the road. And yet this evidence doesn’t appear in your notebook, leaving it unclear as to which approach you should take.
On a more base level, LA Noire may simply not be your cup of tea. With no multiplayer (how would that work?) and other ways to play a case revealed at the end of each episode, we can’t honestly say there’s a great deal of replay value in LA Noire, even if you do get questions wrong or miss crucial evidence. You find a way in the end: it’s an experience rather than a challenge, just like Heavy Rain and its quicktime events. We can’t speak for everyone, but that suits us just fine.
Verdict
There’s a fantastic gag in an old episode of The Simpsons, in which Bart and Lisa refuse to mow the lawn and rake the leaves, only to be taken to a carnival, where they’re desperate to have a go on the virtual garden work simulator.
Playing LA Noire feels a bit like that. It’s a police procedural, CSI style, but without the shortcuts that TV editing and 44 minute episodes provide you, the viewer. Instead, the enjoyment is to be had from running each and every single lead to ground, and finding satisfaction in the breakthroughs you do eventually make. If you’re patient enough for that, you’ll love it."

1) Various plot points and investigations in the game are based on real life events, such as the Black Dahlia case.
2) The game utilises Havok for the animation and physics. (first Havok game is Harley Davidson: Wheels of Freedom).
3) The first review was published by UK newspaper The Guardian, which awarded the game a perfect score,
and stated "Ever since it first worked out how to assemble pixels so that they resembled something more recognisable than aliens, the games industry has dreamed of creating one thing above all else – a game that is indistinguishable from a film, except that you can control the lead character. With L.A. Noire, it just might, finally, have found the embodiment of that particular holy grail."
4) IGN gave the game 8.5 out of 10, stating "L.A. Noire may not reach the emotional heights of a game like Heavy Rain, but it's something everyone must try out. It reaches high and almost succeeds as a brilliant new type of video game narrative."
5) Official Xbox Magazine gave it 8 out of 10, and concluded with "L.A. Noire is an honest-to-goodness detective crime thriller – a genuine breath of fresh air that values narrative and story above all else in an age where scripted action sequences and online deathmatch rule the day. It's the closest thing Xbox has to PlayStation's unique adventurer Heavy Rain."

8) GamingEvolution (Jun 12, 2011) - "The facial technology is so advanced in this game that its borders on true realism. The line is starting to blur between video games and movies and this game is a prime example of the new trend".