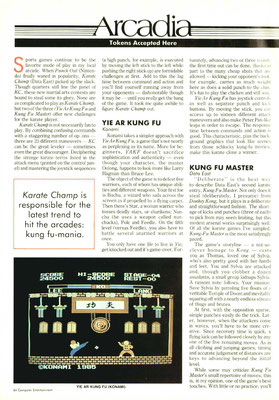 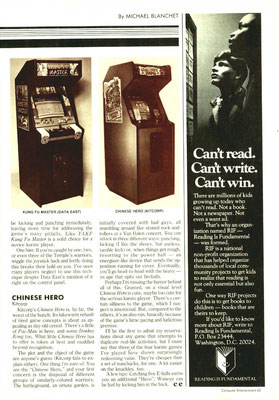 Trivia:
1) A french movie, "Le Petit Amour", by Agnes Varda, renamed for USA release 'Kung-Fu Master' after this video game. Film has nothing to do with kung fu, but has an intro with a scroll-lateral reference to the game and a lot of scenes of the game itself too! Movie is a romance and not a fighting/action movie as the US name propose.
2) Game was initially released in Japan under the name "Spartan X".
3) Based on the Bruce Lee movie "Game of Death", then changed and marketed as a tie-in based on the Jackie Chan film "Wheels on Meals", however the game has no bearing on the plot of the film outside the names of the protagonist and his girlfriend, allowing Irem to export the game without the license by simply changing title.
4) The game was produced for Irem by Takashi Nishiyama, who also created Irem's 1982 arcade-hit Moon Patrol, and later designed the original 1987 Street Fighter at Capcom before leaving to run SNK's videogame development division, creating the Neo Geo arcade system board and its games like Fatal Fury: King of Fighters, Art of Fighting, The King of Fighters '94, and Samurai Shodown.
5) In the game there is a 5-Floor Pagoda (which is Beopjusa temple in Chungcheongbuk-do, South-Korea) and the Giant Kareem Abdul-Jabbar. Reference in the movies : In the movie "Bruce's Finger", you can see the kidnapping letter and a tied-up girl in a red dress. In the movie "Goodbye Bruce Lee, his Last Game of Death" you can see the red pillars and the ceiling tape, like in the game.
6) One of the few games where you can beat children (The official name for green-clad boys which make their first appearance on Floor 2 is "Tom Tom").

7) Game has no actual ending - which lead to a a rumor "Beat the last boss 10 times and you will meet a dragon, and if you beat that dragon - you finaly complete the game".