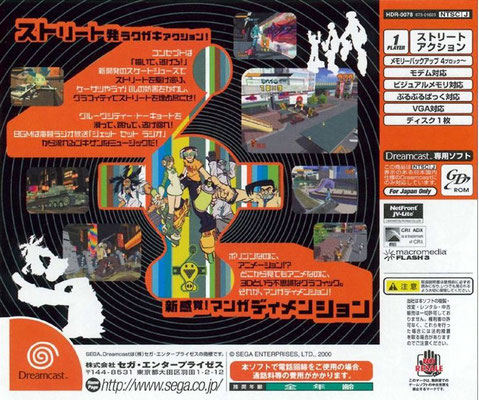 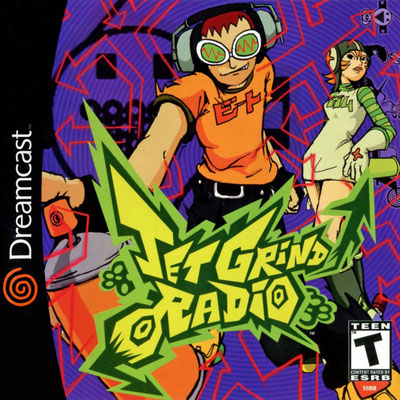 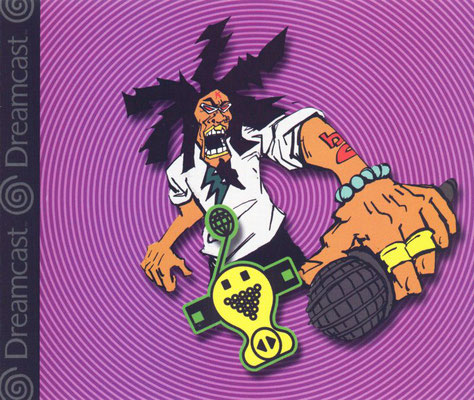 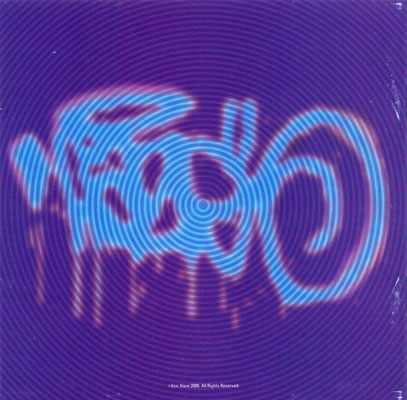 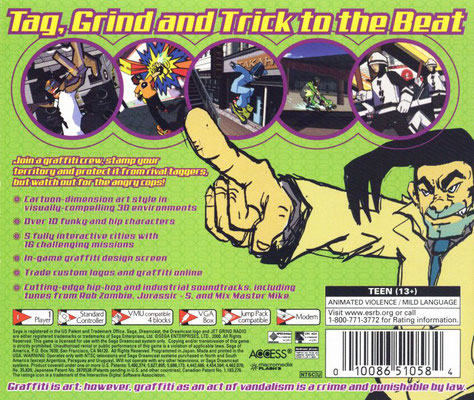 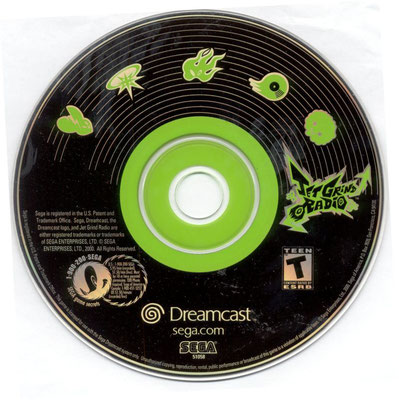 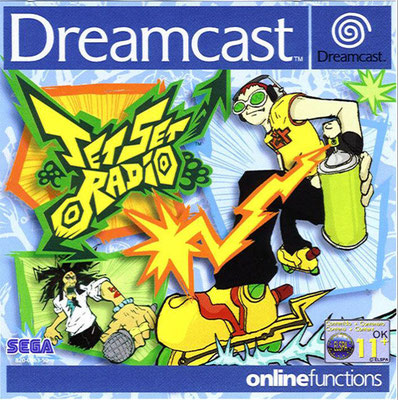 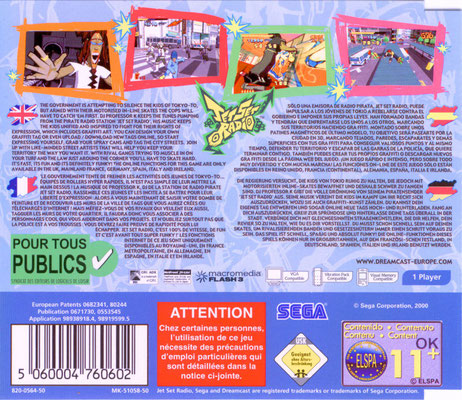 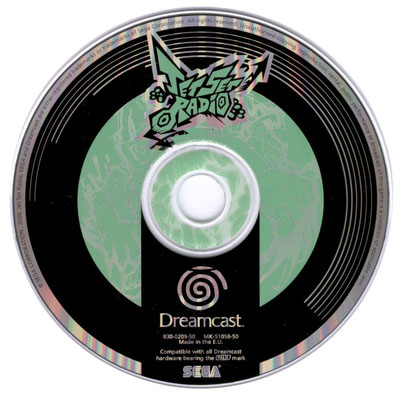 "Jet Grind Radio is one of those "something for everyone" games that really make a perfect addition to the Dreamcast library.

At first glance, Jet Grind Radio looks like an attempt to cash in on the recent skateboarding craze - but nothing could be farther from the truth. Sega's Jet Grind Radio is a game full of redefinitions, forcing you to really rethink what you expect out of a game from an audio/visual standpoint while delivering some exciting, balanced gameplay at the same time.

The city of Tokyo-To is broken up into multiple portions, each of which is controlled by a different gang of inline skating graffiti artists. You control a gang called the GGs, and you must protect your turf from being sprayed up by rival gangs and venture into the other sections of the city to mark up your rivals' turfs. The game is tied together by Jet Set Radio, a pirate radio station run by DJ Professor K. K appears between levels to advance the plot, similar to Lynne Thigpen's role as the radio DJ in the classic gang film, The Warriors. Unfortunately, Professor K never wishes your clique luck as they bop all the way back to Coney.

Each level gives you a time limit, a life meter, and a ton of areas that must be tagged before you can proceed. You'll encounter resistance in the form of gangs tagging over your tags and various levels of response from law enforcement officials. The law starts out small - a ragtag bunch of keystone cops who run after you with nightsticks. But as you move forward, the law gets more and more severe. Eventually, you'll face tear gas-launching cops in full riot gear, tanks, or find yourself surrounded by gunship helicopters that launch skater-seeking missiles in your direction. You also have to deal with the ever-present Officer Onishima, a roughneck cop with a gigantic pistol and a bad case of five o'clock shadow. Should you get caught in Onishima's sights, he'll chase after you, firing off rounds that will send you flying to the ground.

The game moves at a very nice pace. In the beginning, you have to accomplish a brief set of training exercises that show you the basics of skating, painting, and tricks. The game's first few levels are extremely easy to finish, but after completing the first round of levels and inducting a few new members into your skate posse, the game starts to get rough. The cops are tougher to deal with, paint cans are harder to come by, and the areas you need to tag are in some hard-to-reach places. Eventually, you'll face new challenges from the rival gangs and partake in a sort of boss fight where you'll need to tag your opponents. The gameplay is designed to be simple - if you get enough air from a jump, your skater will automatically do tricks, and tagging is done by following simple onscreen controller commands that pop up when you stop to paint. The only nagging problem is the game's camera, which is slow to catch up when you suddenly change course. The paint button doubles as a center camera button, and you'll find yourself using it quite a bit.

The US version of the game has been tweaked a bit by Sega's localization team. Lots of the game's character voices have changed, even though most of them were already in English. Also, a new level has been added to the game - Grind Square. Grind Square is loosely based on Times Square in New York, and newly licensed music from Jurassic 5 and Rob Zombie is played. While the additional level is a nice touch, it isn't up to par with the rest of the game's fabulous locales.

A lot has been said about Jet Grind Radio's graphics in the months leading up to its release, and it's definitely worth repeating here: This game looks simply incredible. The characters and environments aren't made up of that many polygons, but the smooth animation and an amazing use of cel shading (which places a black outline around some of the polys, giving them an almost hand-drawn look - expect to see lots of games stealing this effect in the near future) make the whole greater than the sum of its parts. The game's sound effects and music match the high marks earned by the graphics. The effects, while mostly consisting of grinding noises and the whoosh of spray-paint cans doing their thing, are well done, and the music is an amazing collection of hip-hop beats that fit the action perfectly.

Aside from the game itself, there's also a limited graphic editor included. You can use the editor to create your own graffiti tags for use alongside the tons of artwork already hidden throughout the game. You can also save JPEG files to your VMU using the Dreamcast web browser and import them directly into the editor for use as tags.

Jet Grind Radio is one of those "something for everyone" games that really make a perfect addition to the Dreamcast library that no one should be without."

1) First cel shaded game was ZPC. Proto cel shading was used in the game Another World (1991). The game Doctor Hauzer (1994) (for 3DO) also utilized an early example of cel-shaded art only for the character graphics.

2) The American and European release contained two new levels based on New York. The story and order that you meet characters was modified to include these two levels. Both releases also have different unique soundtracks for these levels.

3) The 2012 HD version has widescreen HD graphics and a new camera system, as well as all the original songs but one.

4) The Dreamcast version of Jet Set Radio appears in the book "1001 Video Games You Must Play Before You Die" by General Editor Tony Mott.

6) The original Japanese version, did not contain the levels featuring Cube and Combo (Grind Square was one of these levels). When the game was brought to the USA, the name was changed to Jet Grind Radio and these extra levels were added. Songs from Rob Zombie were also added. Although, during the game, DJ Professor K still refers to the radio station as "Jet Set Radio". The US version of Jet Set Radio got a limited release in Japan as well, called De La Jet Set Radio. This version was released only through the Dreamcast/SEGA Direct system (online store for Dreamcast), and is completely in English. In Europe, the game kept its original title and had the extra levels. It does not have the Rob Zombie songs. It also has some differently translated dialogue from the USA version.