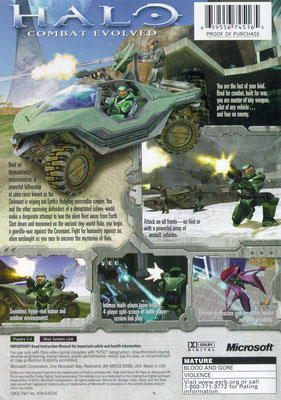 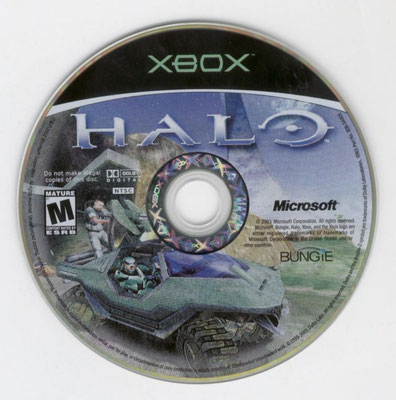 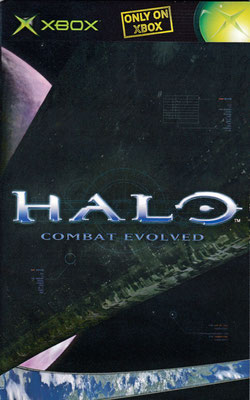 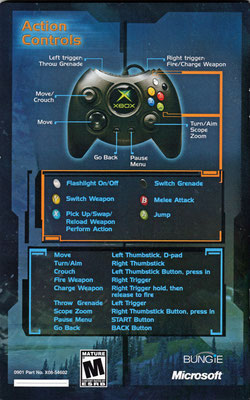 "Halo's gripping tale begins as a spacecraft fleeing the Covenant (Earth's alien enemies) stumbles across Halo, a mysterious ring-shaped world. Playing as the Master Chief, a cyborg soldier so advanced that even the Covenant are awed by him, you fend off the Covenant and explore Halo, uncovering vast secrets that…won't be spoiled here.

Like Half-Life, the story meshes beautifully with the gameplay-even controller configuration happens in-game as the Master Chief is blearily defrosted from cryogenic sleep. Halo's ten huge levels pack in thrilling action that ranges from a D-Day-like beach assault to stealthy sniping to vehicular combat, and stellar A.I. makes every moment tense and exciting. Crafty enemies fight intelligently, circling around to flank you or taking cover to recharge their shields, while your fellow Marines back you up like pros, requiring no orders or direction. Halo's controls feel immediately comfortable and natural-only the twitchy vehicles are a handful at first, but practice eventually makes perfect.

Halo is the kind of landmark, epic game that will lure droves of gamers to the Xbox. It's easily one of this year's best, providing a compelling reason to fork 300 bucks over to Microsoft.

Graphics: 5.0.Halo's resplendent world showcases rich scenery, sharply modeled characters, smooth animation, and best of all, a solid frame rate that hiccups only infrequently in split-screen action.Sound: 5.0.The Covenant sound like Ewoks on helium, but that's a minor gripe in an otherwise-dazzling audio package. Stirring music and superb sound effects blend sweetly with topnotch voice work.Control: 4.5.Halo's controls mostly do what great controls should do: Work so smoothly that you don't really notice them. It's a shame that the vehicles handle so fussily, though.Fun Factor: 5.0.Halo's so good it's worth gushing over. This immersive sci-fi epic delivers both an expansive story and electrifying first-person combat, making it one of 2001's best games."

1) Crepuscular rays (more commonly known as sunbeams or sun rays), in atmospheric optics, are rays of sunlight that appear to radiate from the point in the sky where the sun is located. These rays, which stream through gaps in clouds (particularly stratocumulus) or between other objects, are columns of sunlit air separated by darker cloud-shadowed regions. Crepuscular rays, volumetric rays, or god rays have become a common effect in games. They are used especially in first and third person games – where the player can easily look at the sky – to give the sun, moon, or other bright light sources additional impact and create atmosphere.

2) The Xbox version of Halo: Combat Evolved appears in the book "1001 Video Games You Must Play Before You Die" by General Editor Tony Mott.

3) Halo went through many changes during its development. As originally conceived, it was a real-time tactical game for Windows, something like a sci-fi version of Myth (1989 adventure game). The focus shifted toward direct control of one of the individual units and it became a third person shooter and work began on a Macintosh version as well. This is how the game was originally announced. After Microsoft bought Bungie, Halo was shifted to being an Xbox exclusive. Around the same time, it became a first person game, with Bungie saying there wasn't any way to get precise aiming to work in third person. Many of the art assets changed too, with the Master Chief's armor in the game as shipped looking quite different than in the original trailer. Eventually, Halo was ported back to its original platforms of Windows and Macintosh bearing no resemblance to how it started.

4) Beat the game in Legendary difficulty and you get an additional funny cutscene at the end.

5) If you look closely at the shotgun shells taken out when Master Chief reloads, you'll see there are hippo heads pictured on them.

6) If you highlight the "Edit Gametypes" section in the multiplayer section of this game, you come across an image of Master Chief with text that, to the reader, seems to be schematics for each of his body parts. If you look closely, some of the text aren't schematics, but text: Text on Head/Gun: "UV Protectant Sun Visor for Protection from Elements". Text on Upper Right Leg: "Sometimes I give myself the creeps, sometimes my mind plays tricks on me" (lyrics from the Green Day song "Basket Case"). Text on Lower Right Leg: "Hydraulic Suspension Thigh Pads with cool Kevlar crap". Text on Left Leg: "Directional Locks MJOLNIR cyborg dealer parts". Text on Arm: "Action/Reload see may flexible joint system". Text on Torso: "All your base are belong to us".

7) Halo is used to film the machinima web series Red vs. Blue: The Blood Gulch Chronicles, which is currently in its fifteenth season.

8) Cortana (Windows 10 virtual voice assistant) was taken from this game. The hero of Halo spends most of his time taking orders from Cortana, an A.I. named after a mythical sword who's beginning to show signs her ego is expanding, and who has few qualms about breaking a few eggs (destroying Halo and killing the marines on it) to make an omelet (saving Earth).

9) At the center of the Halo logo, you can see the Marathon logo (Marathon being the FPS series Bungie was previously famous for). The Marathon logo can also be seen in several places throughout the game, including on the hull of the human battleship, on Captain Keye's uniform, and on several of the doors found around Halo. The character design of 343 Guilty Spark, one of the game's pivotal characters, also strongly resembles the Marathon logo.

10) Some of the dialogue spoken by the marines, comes directly from the film Aliens.

11) As of 2021, Halo is the second best-selling original Xbox game of all time. It has sold ober 5 million copies. (The best-selling game on the Xbox is Halo 2, first released in the United States in 2004. It went on to sell over 8.46 million copies worldwide).

12 Gearbox took over programming of Halo PC and discovered that they can't use much of the existing networking code (for the XBox). They had to rewrite that entire section, delaying the title for PC by several months.

13) The PC version (and probably Mac, too) of Halo adds a few bonus features for the multiplayer mode, these include two weapons: a Flamethrower (which was scrapped from the game at the last minute) and a Fuel Rod Gun (the weapon that the Hunters use in the main game) as well as allowing you to use the Banshee and a rocket-launcher version of the Warthog.

15) Emulated in: XQEMU (not fully emulated). Game runs on Windows 10 as part of The Master Chief Collection.