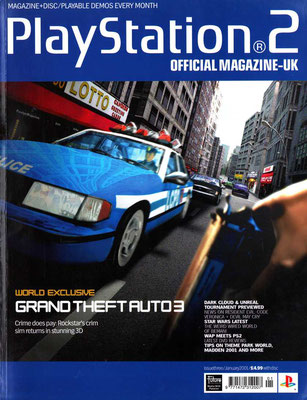 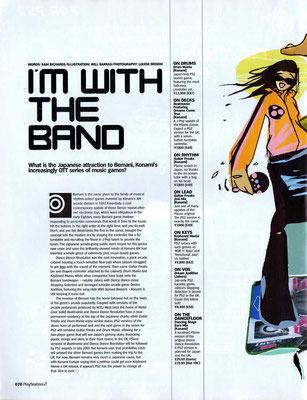 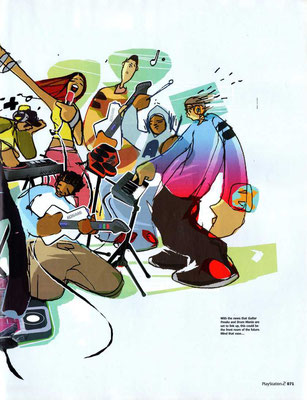 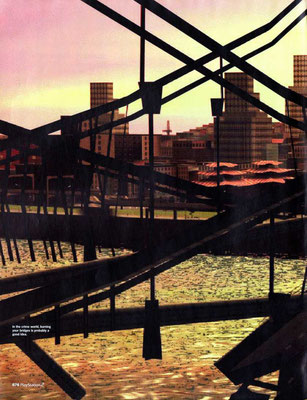 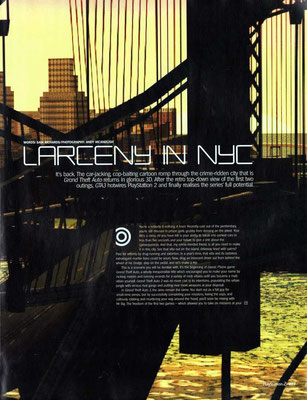 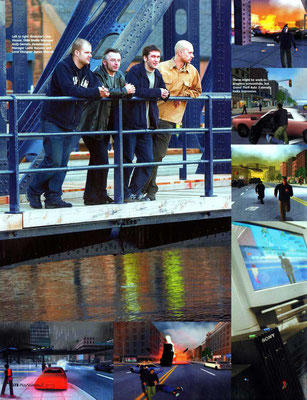 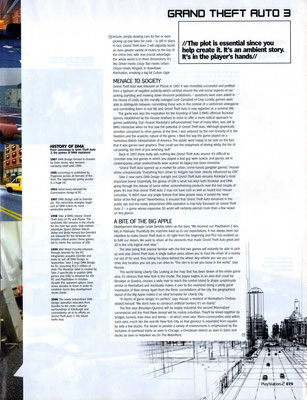 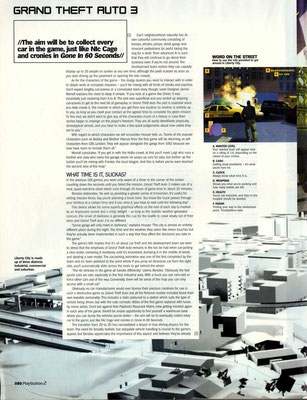 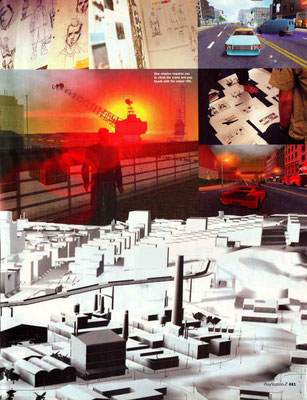 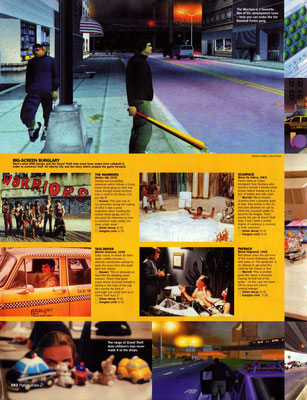 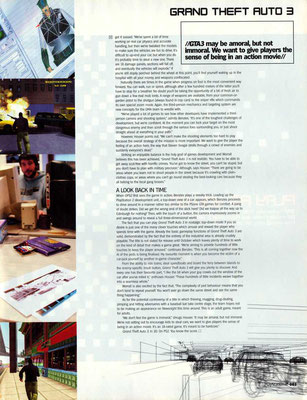 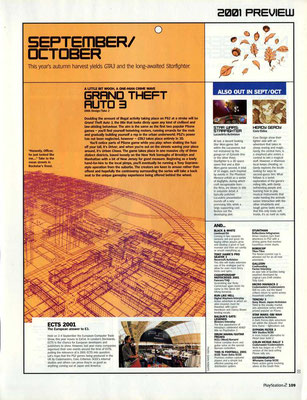 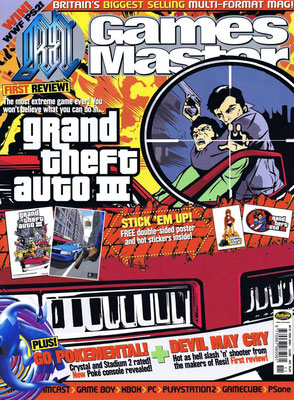 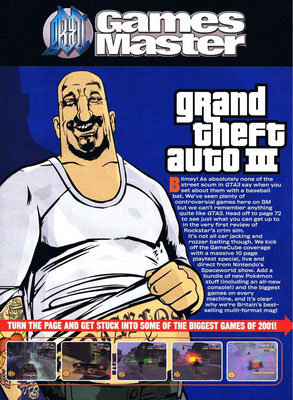 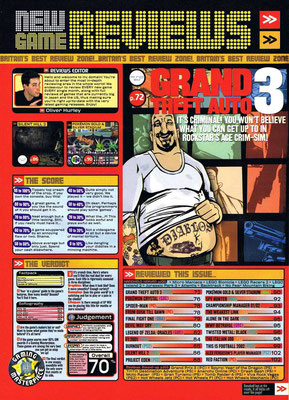 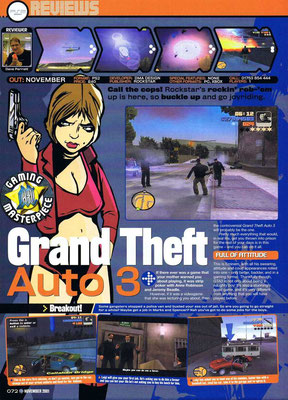 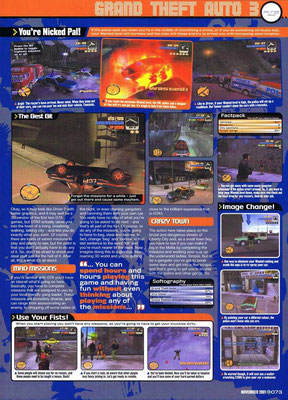 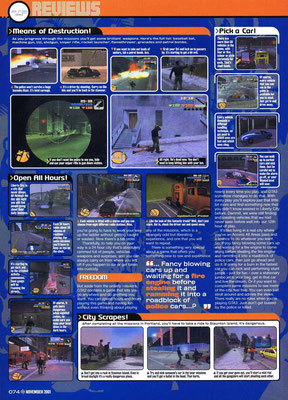 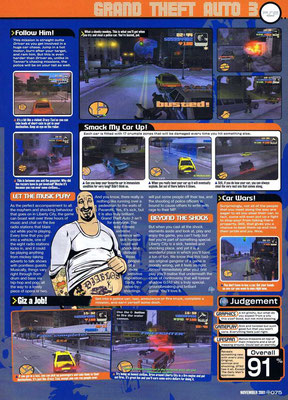 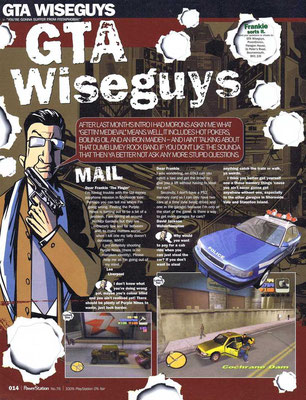 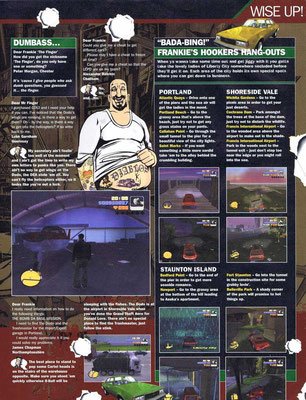 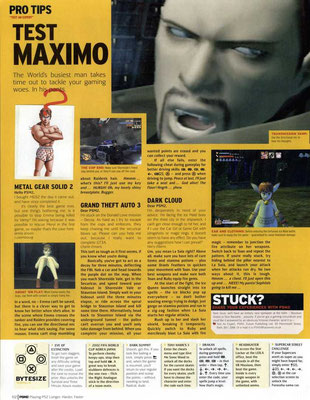 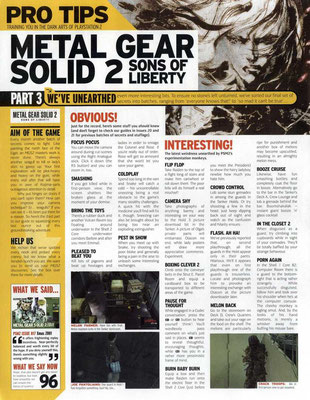 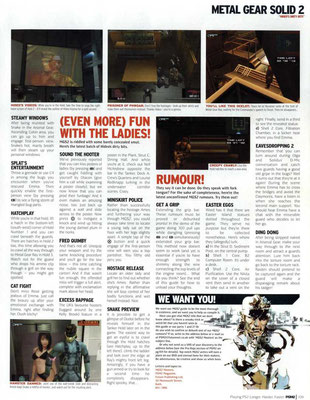 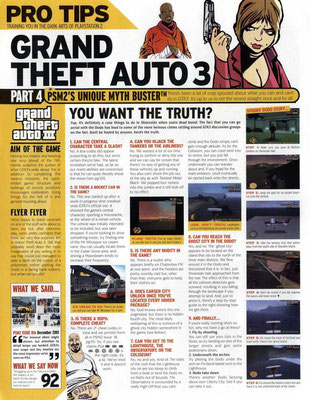 Trivia:
1) Open-ended game design of the Grand Theft Auto series creates a level of freedom and detail that was unprecedented in 2001.
2) The voice cast for the game's characters features several established celebrities. Notable voice actors include: Michael Madsen (from Tarantino movie Reservoir dogs) as Toni Cipriani, Michael Rapaport (from the film True romance) as Joey Leone, Joe Pantoliano (Sopranos) as Luigi Goterelli, Debi Mazar (from the film Goodfellas) as Maria Leone, Kyle MacLachlan (Twin Peaks) as Donald Love, Robert Loggia (from the film Scarface) as Ray Machowski and Frank Vincent (Goodfellas) as Salvatore Leone.
3) The game takes place in Liberty City, a city on the East Coast of America, which is loosely based on New York City. Altogether, the city and surrounding areas take up about three square miles.
4) Altough you can kill thousands people with you car - there is no damage for your car from it at all (this is still true for any modern open world game in 2021).

5) New features for open world games is planes (enemy planes and passengers planes, you can "fly" only one plane in the game - Dodo (it has stubby wings that have been sawed off at the midpoint and it's almost imposibble to fly on it), also game featured subway trains.
6) First-person shooter mode - according to leftover data, first-person was once going to extend beyond a simple crosshair and into a fully-fledged mode with animations and all. Apparently the feature didn't make it very far, as not all of the necessary animations were completed, and comments in the weapon stats file indicates that it was only in the testing stages before getting axed. Implementing this feature wasn't tried again until Grand Theft Auto V (only for the next-gen versions and Windows as not even the 7th-Generation consoles could handle it.)
7) "Claude" is very first string found within the game's text file. This could be a reference to Claude Speed, who was the protagonist in Grand Theft Auto 2, and if so, they likely intended to give the player character in this game, who is normally nameless, the same identity. In Grand Theft Auto: San Andreas, it is indeed confirmed that Claude is the GTA 3 player character's name.
8) Even though there are no flyable helicopters in the game, some partial coding for them remains in the game's executable. This might mean that they were supposed to appear in GTA 3 after all, but were cut cause it was too complex task for it's the time. It should be noted that most of the buildings in the game don't have a solid roof (or even a roof at all), so the city was definitely not meant to be seen from above, even though a semi-flyable plane (Dodo) remains in the game.
9) Children as pedestrians was planned in the game but later was cut (censored). (Info from Gamespot preview from 2001).
10) Eurogamer stated "A luscious, sprawling epic of a game and one of the most complete experiences I have ever encountered. If this is what I've waited a year to see on my PS2, then I would have waited ten. Magnificent".
11) Game Informer noted "The environments of Liberty City are stunning in scope and detail, dwarfing anything I've ever seen, and your choices are endless."
12) In 2009, Game Informer placed Grand Theft Auto III 4th on their list of "The Top 200 Games of All Time", saying that it "changed the gaming landscape forever with its immersive open world sandbox".
13) After its initial release in Australia, the game was banned for a period ot time and a censored version of the game was released in its place.
14) Six months following the initial PlayStation 2 release, Grand Theft Auto III was ported to Microsoft Windows. Released on 21 May 2002, the port supports higher screen resolutions and draw distance, and features more detailed textures, a customisable player skin, and a custom option for MP3 playback in cars. In 2011 mobile Android and iPad versions with even more updated graphics was released.
15) Postponed from early 2002 to December 2003 due to an exclusivity contract with Sony, the Xbox version of the game was bundled with its sequel Vice City in a compilation titled Grand Theft Auto: Double Pack. The Xbox port features custom soundtrack support as well as improved audio, polygon models, and reflections over the previous ports.

16) In PS2 version player could do roundhouse kick (feature was removed in Windows version).

17) GTA 3 has only one (!) F-word in whole game (said by random black gangster pedestrian in Shoreside Vale,if you attack him). It was first ever F-word in GTA series (altought it was said once in radio song in GTA 2).
18) Game protagonist is mute, similar to protagonist in Half-Life.

21) The Next Level (Nov. 28, 2001): "One of the first things you notice about Grand Theft Auto 3, after the initial cinema, is the sense of scale. This game is huge. I'm not talking huge like the number polygons Tecmo poured into Kasumi's breasts to get them to jiggle just right, I'm talking about the fact that if you started out on the furthest end of one stage, and then proceeded to walk to the other end of the map, it could take possibly hours. While this could be said about several of games if you think about it, GTA3 presents it in a fashion that gives possibly the most genuine impression of being in a real city, with subways, an airport, a bay...the whole sclemiel. And while you may not be able to enter every building (as in Shenmue, the only game that compare in terms of scope), you're can pretty much walk as far as you can see, and drive where you can't. I cannot emphasize enough how wonderful the feeling that GTA3's environment inspires is."

22) In GTA Vice City when switching radio stations, you can hear pieces from the GTA 3 radio stations hidden in the radio seek noise.

23) Banned in Malaysia and South Korea.