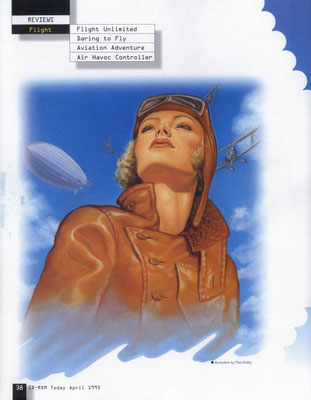 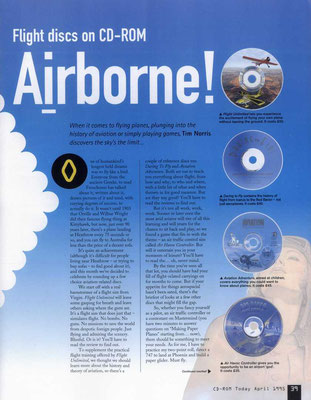 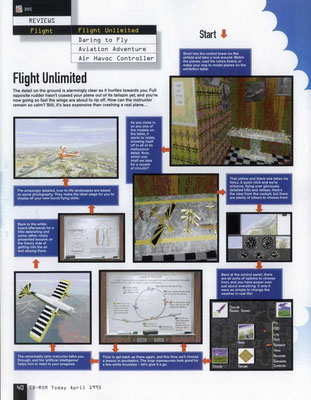 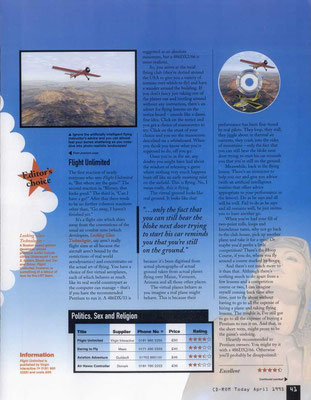 Trivia:
1) Project leader Seamus Blackley, a particle physicist and amateur pilot, conceived the game in 1992. He felt that other flight simulators failed to convey the experience of real flight, and he reacted by coding a simulated atmosphere for Flight Unlimited based on real-time computational fluid dynamics. Aerobatic pilot Michael Goulian endorsed the game and assisted the team in making it more true to life.
2) Supports old VR headsets.
3) The player attempts to use the direction of the wind, thermals—which realistically occur above areas that absorb more heat, such as plains and parking lots—and the orographic lift caused by slopes to stay airborne for as long as possible.
4) The concept of Flight Unlimited originated from Looking Glass Technologies' discontent with contemporary flight simulators. Company co-founders Paul Neurath and Ned Lerner wanted to develop an exceptional game in the genre, and Neurath considered the idea during the production of Ultima Underworld: The Stygian Abyss.
5) Simulated atmosphere: air acts as a fluid that automatically reacts to the shape of any object placed within it. The game's planes fly because the interaction of their architecture with the atmosphere creates lift, as with real-world aircraft.
6) The creators placed microphones inside the cockpits and next to the engines, and they flew each plane at multiple speeds while recording with a digital audio tape machine.Combining this material with digital recordings of wind sounds, the team fashioned a physics-based sound system: sounds of the wind and engine are altered in real-time based on wind speed in the game.
7) Flight Unlimited's terrain graphics were created with stereophotogrammetry. The team gathered aerial photographs from locations in France and the United States.They combined two to three images of each area to create digital reproductions roughly 11 square miles (28 square km) in size.
8) After assembling a playable demo of Flight Unlimited, the team requested assistance from then-US Aerobatic Team member Michael Goulian, who worked as a flight instructor at the nearby Hanscom Field.Because of the game's flight code, Goulian was able to execute aerobatic maneuvers within less than three minutes of playing the game; and he later performed his "entire basic aerobatic routine". Blackley told PC Gamer US that, while Goulian disliked flight simulators, "When he flew Flight Unlimited, he just said "pretty cool". I was so psyched.
9) Critics: The Record's David Noack believed that the game's physics and stereoscopic terrain set "a new standard in flight simulation".  Writing for Computer Gaming World, Bob and John Nolan stated, "If anything, you should at least take a look at this product, because you will be looking at the future of simulations". PC Magazine's staff commented that it makes "planes behave more like real aircraft than any simulator we have seen". Bob and John Nolan called Flight Unlimited "the ultimate show off piece for your new Pentium", thanks to "unbelievable" graphics superior to those of any other computer game. Atkin considered the "instructor's helpful voice (and his blood-curdling scream if you pancake the plane) ... to be one of the best uses of voice ever in a multimedia title".
10) Viewing the credits for the game brings up a neat tiltable "plate" where gelatinous cubes fall down one by one and bounce on it; each cube bears the face of one of the programmers. Like the game, this section is also based on real-world physics, as cubes bounce, wobble, bend, and deform as they hit the plate. The user can even tilt the plate to alter the strike, bounce, and roll of the cubes!
11) The graphics engine for Flight Unlimited was designed with the future in mind. Most graphics cards back then might have been able to hit 1024x768 if they were lucky, but the game was designed to output even higher than that. (only for Windows version which released later in 1995).