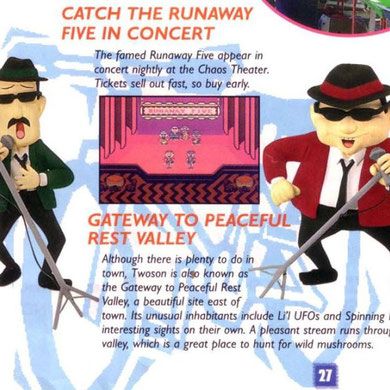 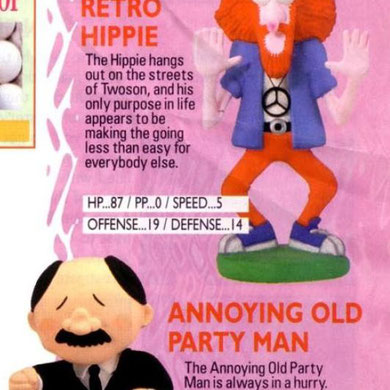 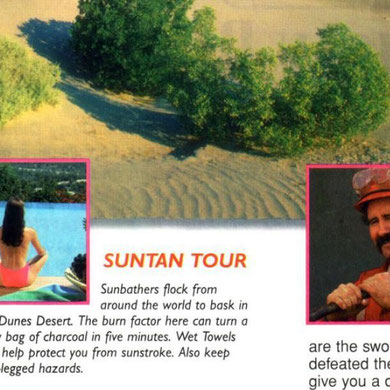 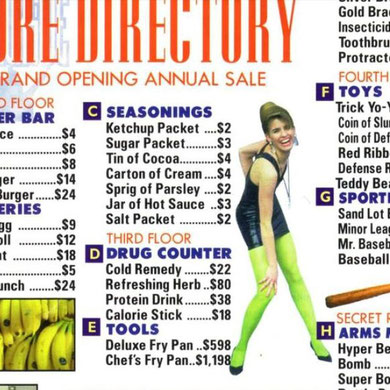 1) Themed around an idiosyncratic portrayal of Americana and Western culture, it subverted popular role-playing game traditions by featuring a real world setting while parodying numerous staples of the genre.
2) It was heavily marketed upon release via a promotional campaign which sardonically proclaimed "this game stinks" (with stinky stickers released in magazines).
3) Creator Itoi told Weekly Famitsu that Shigeru Miyamoto (Donkey Kong) liked the game and that it was the first role-playing game that Miyamoto had completed.
4) In addition to reworking the original puns and humor, Lindblom (american translator) added private jokes and American cultural allusions to Bugs Bunny, comedian Benny Hill, and a movie "This Is Spinal Tap". Under directives from Nintendo, he worked with the Japanese artists and programmers to remove references to intellectual property, religion, and alcohol from the American release, such as a truck's Coca-Cola logo, the red crosses on hospitals, and crosses on tombstones. Other changes was - alcohol became coffee, Ness is wearing clothes in the Magicant area and the Happy Happyist blue cultists were made to look less like Ku Klux Klansmen.

5) GamesTM wrote that the game designers spoke with their players through the non-playable characters, and noted how Itoi's interests shaped the script, its allusions to popular culture, and its "strangely existential narrative framework".
6) Critics consider the game one of the weirdest and most surreal role-playing games. Examples include using items such as the Pencil Eraser to remove pencil statues, experiencing in-game hallucinations, meeting "a man who turned himself into a dungeon", Jeremy Parish of USgamer called EarthBound "the all-time champion" of self-aware games that "warp ... perceptions and boundaries" and break the fourth wall, citing its frequent internal commentary about the medium and the final scenes where the player is directly addressed by the game.
7) The game has been cited as an official influence on "South Park: The Stick of Truth" video game (via series creator Trey Parker). South Park co-creator Trey Parker said that EarthBound's "mundane American setting and child heroes" influenced South Park: The Stick of Truth.

8) EarthBound is known for having a cult following which developed over time well after its release.

9) Ness became widely known from his later appearance as an ensemble cast member in the Super Smash Bros. series.
10) A submarine from animated film "Yellow submarine" can be seen inside Dungeon Man.
11) The Runaway five is inspired by the movie Blues Brothers.

13) Postmodernism is a late-20th-century movement in the arts, architecture, and criticism that was a departure from modernism. Postmodernism articulates that the world is in a state of perpetual incompleteness and permanent unresolve. Postmodernism promotes the notion of radical pluralism; that there are many ways of knowing, and many truths to a fact. From a postmodern perspective knowledge is articulated from perspectives, with all its uncertainties, complexity and paradox. Thus knowledge is relational and all realities are woven on local linguistic looms. Postmodernism includes skeptical interpretations of culture, literature, art, philosophy, history, economics, architecture, fiction, and literary criticism.