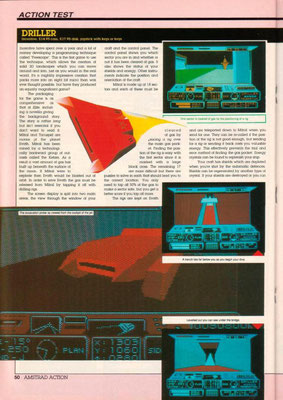 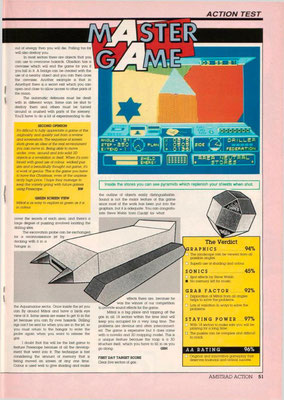 Trivia:
1) Plot:  In the far future, the human race has abandoned Earth for the reaches of outer space, having ruined the planet in the relentless quest for resources and in endless conflict. In a desperate search to find a new home, they found Evath, a life-sustaining planet with two moons, Mitral and Tricuspid. They sent a ship, named "Exodus" to colonize this new planet with explorers, embryos and supplies. Generations passed, and the colony on Evath was formed. Without the rule of law, the oldest members of the Exodus' crew, the Elders, were forced to take control, form an army and bring the rule of law to Evath. Generations passed and the original survivors of the Exodus died, leaving new generations of Elders. With each new generation their power weakened, as did the law. The colony was once again in a fluid situation, and finally the Elders, with their last remnants of respect, formed an army to reverse that condition. Martial law was declared, and all criminal acts were dealt with swiftly with the death penalty. As time went by, the death penalty became less frequent in its use, and banishment from the planet was used as an alternative. These criminals were nicknamed "Ketars", a title associated with pity, scorn, and later, anger. The Ketars formed a colony on Mitral, one of Evath's moons. This colony was exactly that which one would expect from a grouping of murderers, thieves and rapists - death and destruction reigned to begin with, but eventually a hierarchy formed, with the strongest and most wily of the population in leadership. Dissent and betrayal were punished swiftly and harshly. Paranoia was rife, and an intricate system of security devices were installed throughout Mitral. The colonization of Evath brought with it "rubicon" crystals, which provided energy in abundance. Later in Evath's history, scientists had discovered that these crystals were formed by obtaining their energy from Evath's sun. With this knowledge they were able to manufacture these crystals artificially and mining ceased. The Ketars had little knowledge of mining or science, and continued to mine Mitral to exhaustion, until, one day, explosions and fires began to break out all over the colony. A gas build-up had formed under the surface of Mitral. The Ketars attempted to release the gas in a controlled fashion, but their lack of knowledge and experience prevented them from doing so. Eventually, they were forced to evacuate the planet and populated an uninhabited continent on Evath, hoping to evade detection in the process. Before leaving, they set all of their security systems to attack anyone who approached. However, they were detected, and the problems were known to the Evath intelligence services. Lesleigh Skerrit aspired to work for the Driller Federation. His grandfather had been a member of the Federation, but he was falsely accused of murder and banished as a Ketar. Only later did the evidence contesting his guilt surface, but it was too late - the law did not allow someone banished as a Ketar to return to Evath. Lesleigh was not bitter and did not seek retribution. He wanted to study law to prevent this kind of mistake happening again. Called in by his superior, Montigue Yarbro, he is offered a lifetime opportunity - to complete his training and gain a promotion to Elite within the Driller Federation in one fell swoop. His experience on Mitral bore him well - he was to go to Mitral and attempt to avert the coming catastrophe. Mitral, having been abandoned in its unstable state by the Ketars, was going to explode within four hours, and the explosion would take Evath with it. Skerrit's mission was to use the excavation probe "Last Hope" to place eighteen drilling rigs around Mitral to allow the gas to dissipate harmlessly into space and prevent this disaster. Things are not so simple though, with the security systems activated prior to the Ketars' departure.
2) The game requires the player to maneuver the excavation probe, through a first-person view, through eighteen regions (in the shape of a rhombicuboctahedron) of the moon Mitral, and place a drilling rig in each of them to allow a minimum of 50% of the gas to escape.
3) The eighteen regions are actually platforms above the true surface of Mitral; the excavation probe cannot fly or hover (although it can rise and lower itself slightly on hydraulics).