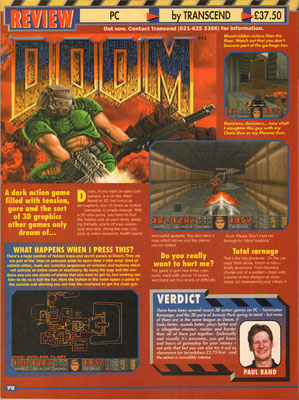 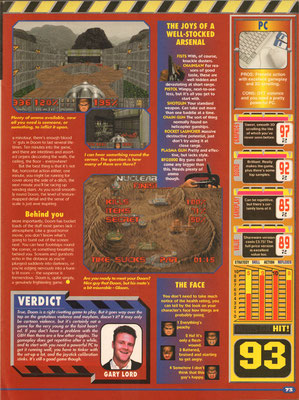 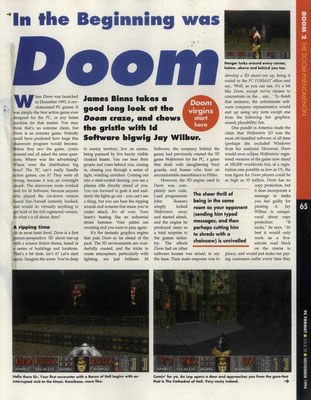 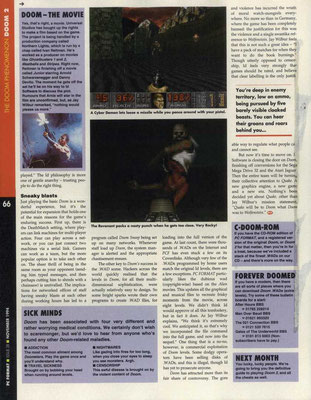 Trivia:
1) Featured varying light levels and custom palettes (all areas in Wolfenstein 3D are fully lit at the same brightness). The latter contributed to Doom's visual authenticity, atmosphere and gameplay, as the use of darkness to frighten or confuse the player was nearly unheard of in games released prior to Doom.
2) GameSpot wrote that "despite its numerous appearances in other formats and on other media, longtime fans will forever remember the original 1993 release of Doom as the beginning of a true revolution in action gaming."
3)  Most of the sprites were drawn by hand, but some of the characters were digitized from sculptures. These were the player character, the Cyberdemon and the Baron of Hell, all done in clay by Adrian Carmack, and the Arch-Vile, the Mancubus, the Spider Mastermind and the Revenant, created in latex and metal by Gregor Punchatz. The sculptures were photographed from five to eight different angles so that they could be rotated realistically in-game, and finally touched up, colored and animated digitally with a program created by John Carmack.
4) Up to version 1.1, it was possible to run the game on three monitors at once, giving a 270-degree field of vision.
5) The sound of a Former Human and/or Imp dying is that of a Bactrian camel's mating call.
6) In version 1.4 , an alteration was present. In Episode 1, Map 4: "Command Control", a structure originally lowers to the ground to create a pattern of a swastika on the floor. This was done as a reference to "Wolfenstein 3D" however, this offended many players so it was changed to a different, yet similar structure in this version.
7) SNES version: All blood and splatter effects were removed. Game Boy Advance version made enemy blood green in order to secure a Teen (not Mature) rating from the ESRB.

-'fuck' in the game? i'd leave: this is just more monsters and levels.

- what a load. suck it down, asshole!

- you're a fucking wimp! don't quit now! we're still spending your money! THIS IS NO MESSAGE!

The first seven messages are under a comment saying "FinalDOOM?", but this was added by Bernd Kreimeier when he was cleaning the source for release to the public. These messages were never intended for Final Doom - they were "development mode only" messages written by John Romero. "Ron" referred to Ron Chaimowitz, CEO of GT Interactive, publisher of The Ultimate Doom, Doom II, and Final Doom.

12) The sky background of Episode 1 was taken from a photograph of Yangshuo Cavern made by Tom Atwood.(picture below).

14) Emulated in: DOSBox. Best way to emulate it with best image quality - is to use Windows version, in emulator VMware that running Wndows 2000.