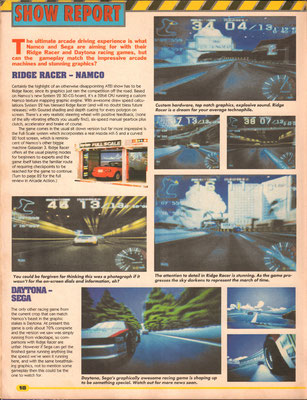 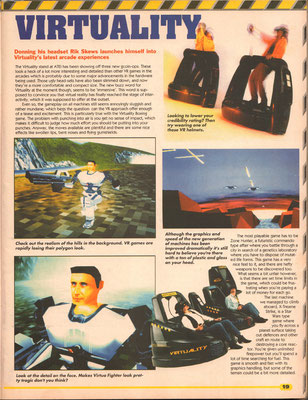 Trivia:
1) At the time of its release, game  was considered the most visually detailed 3D racing game. Compared to the flat-shaded polygons of its predecessor, Virtua Racing, Daytona's 3D-world was fully texture-mapped, giving it a more realistic appearance than the former.
2) Daytona maintained a consistent 60 fps refresh rate, even with multiple opponents on screen, surpassing the motion smoothness of the only other racing game in a comparable graphical arena, Namco's Ridge Racer.
3) Daytona USA offers multiplayer and introduced the possibility of linking four twin cabinets or eight deluxe cabinets to create an eight-player competition. Linked deluxe cabinets may also include a camera pointing towards the drivers seat, linked to a closed-circuit television to show the player on a separate screen.
4) The depiction of the Hornet car in the original game resembles both a Chevrolet Beretta and a first generation Chevrolet Lumina, although the former was never entered in NASCAR.
5) Daytona also caused and still causes a problem in the arcade industry, Sega had come up with such a 'killer app' that no other game from them or any other company since has matched it in terms of profitability, leading to the phrase heard from most site operators, "It's no Daytona".
6) This game contains statues of Sonic the Hedgehog and Jeffrey from "Virtua Fighter".

7) One of the first reflections in 3D games (first game with reflections was Dark Edge (1992).

9) Reflection mapping- In computer graphics, environment mapping,or reflection mapping, is an efficient image-based lighting technique for approximating the appearance of a reflective surface by means of a precomputed texture image. The texture is used to store the image of the distant environment surrounding the rendered object (the cars in the game appear to be reflective).