Game is lost (no screenshots or photos of the device exist) 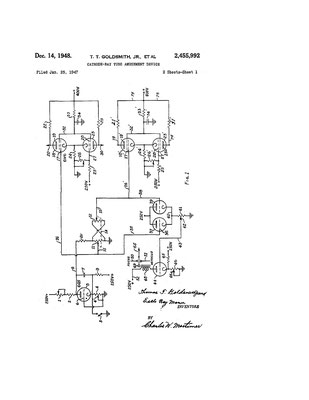 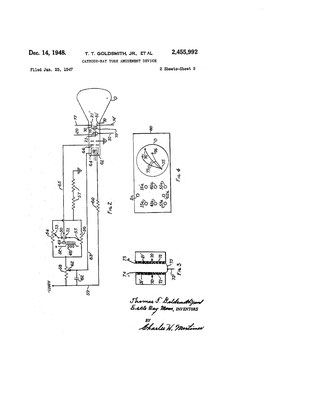 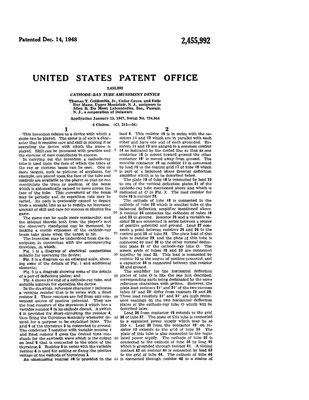 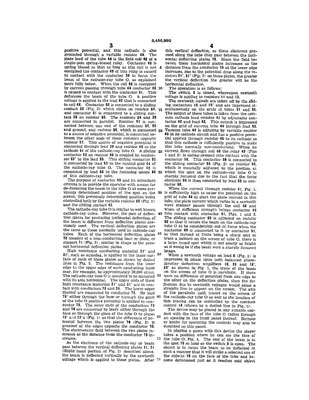 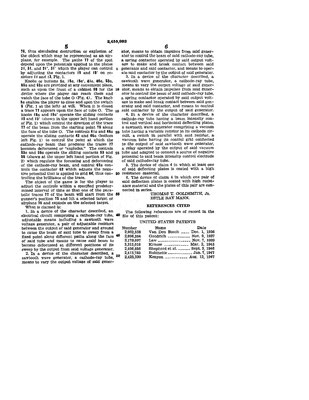 Patent papers with scheme of the device

1) Game simulated a missile firing at a target. Game uses joystick, device that records and controls the quality of an electronic signal. The strength of the electronic signals produced by the amusement device is controlled by knobs which influences the trajectory of the CRT's light beam. The device does not use memory or programming.
A game in which a player controls the CRT's electron gun much like an Etch A Sketch. The beam from the gun is focused at a single point on the screen to form a dot representing a missile, and the player tries to control the dot to hit paper targets put on the screen, with all hits detected mechanically. By connecting a cathode ray tube to an oscilloscope and devising knobs that controlled the angle and trajectory of the light traces displayed on the oscilloscope, inventors create a missile game that, when using screen overlays, created the effect of firing missiles at various, exploding targets (defocusing ray beam on CRT).

2) The cathode ray tube (CRT)-  is a vacuum tube containing one or more electron guns, and a phosphorescent screen used to view images.It has a means to accelerate and deflect the electron beam(s) onto the screen to create the images. The images may represent electrical waveforms (oscilloscope), pictures (television, computer monitor), radar targets or others. CRTs have also been used as memory devices, in which case the visible light emitted from the fluorescent material (if any) is not intended to have significant meaning to a visual observer (though the visible pattern on the tube face may cryptically represent the stored data).

3) Analogue electronics  are electronic systems with a continuously variable signal, in contrast to digital electronics (Spacewar! (1961) where signals usually take only two levels. The term "analogue" describes the proportional relationship between a signal and a voltage or current that represents the signal.
4) Computer animation (CGI) is actually younger than video games. First computer animation was in the movie Vertigo (1958).