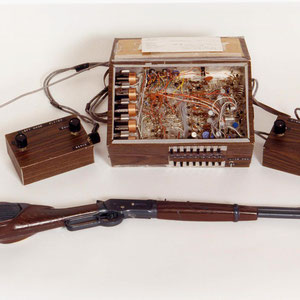 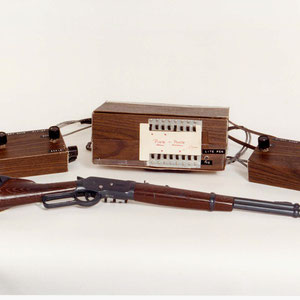 2) First game on the console was called "Chase". Vacuum tube circuit produced two-spot display, game used joystick. People able to play a "chase' game on the set, with one 'player's dot trying to 'catch' the other player's.
3) Also known as "Fox and hound" chase game was demonstrated to Sanders corporate director of research and development, Herb Chapman. The demonstration was a success, and shortly thereafter the project was granted the sum of $2 500 to maintain it. Project was unofficial.
4) Console uses a type of removable printed circuit board, called a game card, that inserts into a slot similar to a ROM cartridge slot. The game cards do not contain any components, but have a series of "jumpers" — simple electrical connections — between pins of the card connector. These jumpers interconnect different logic and signal generators in the console to produce the desired game logic and screen output.
5) In late 1967 the "Chase" game got a machine-controlled third dot, as well as compatibility with the first ever ‘light-gun’ peripheral. Bauer create first light gun and developed several video games. First gun for a home console  was in fact a big rifle.
6) A video game console is a device that outputs a video signal or visual image to display a video game. The term "video game console" is used to distinguish a console machine primarily designed for consumers to use for playing video games in contrast to arcade machines or home computers. It includes home video game consoles, handheld game consoles, microconsoles and dedicated consoles.
7) Light gun is a pointing device for computers and a control device for arcade and video games, shaped as a pistol. Modern screen-based light guns work by building an optical sensor into the gun, which receives its input from the light emitted by on-screen target(s). The first device of this type, the light pen, was used on the MIT Whirlwind computer. First ever mechanical light gun game was arcade game "Seeburg Ray-O-Lite" (1936).