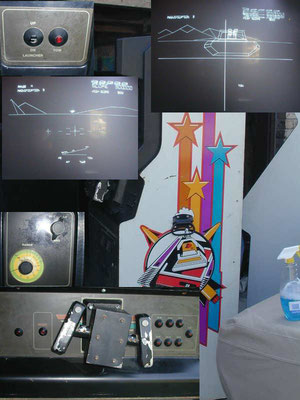 "While parents and school officials fret over the grip video games have on the nation's children, the United States Army is experimenting with the games to see if they can be of some practical use in modern weaponry training.

The Army's Training and Doctrine Command has asked Atari, a major manufacturer of video games, to come up with a modified version of its Battlezone for training gunners for the Army's new heavily armed M-2 personnel transport.

Soldiers win points for knocking out the tanks and helicopters of the Warsaw Pact countries on the screen, but if they hit a ''friendly'' war machine, they are penalized to the tune of the ''1812 Overture.'"

"The military services are trying to decide who might best sit at the controls of their evolving electronic weapons. Preliminary tests cited by some experts suggest that pilots with good psychomotor skills also do well at video games. No one is considering PacMan yet as a recruiting device. But the Arny is evaluating a version of Atari's Battlezone tank video game, altered to show the silhouettes of Soviet war machines. In programming a $4,000 video game or a $50 million simulator, that extra bit of realism on the target screen cannot hurt. "

1) There's rumours about obscure military simulators with "Incredible graphics" from 1981 (like CT5 by Evans & Sutherland and others). These simulators based on a CGI pre-recorded films, which played on a mechanical device). For more info, watch Advanced Simulator for Pilot Training simulator (1974).
2) Conversion of Battlezone (1980). Game still called Battlezone on tittle screen.

3) Game was U.S. Army  targeting training for gunners on the Bradley Fighting Vehicle.  Approaching Atari in December 1980, some developers within Atari refused to work on the project because of its association with the Army, most notably original Battlezone programmer Ed Rotberg. Rotberg only came on board after he was promised by management that he would never be asked to do anything with the military in the future. Only two were produced; one was delivered to the Army and is presumed lost, and the other is in the private collection of Scott Evans, who found it by a dumpster in the rear parking lot at Midway Games.

4) A prototype of the simulator was rushed out in March 1981, and was introduced at the worldwide TRADOC conference that year. It was a hit.