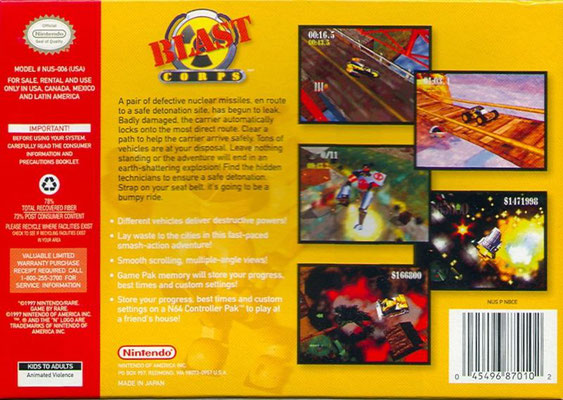 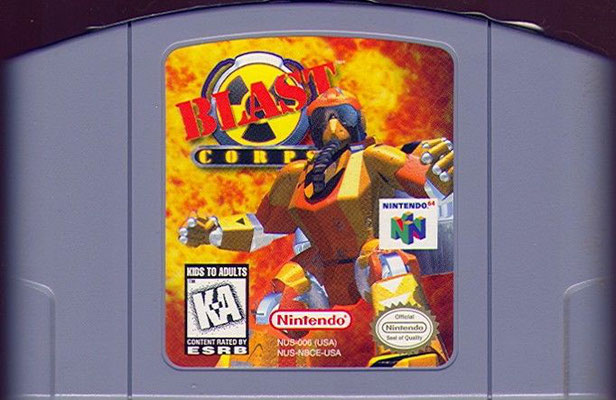 Review  - Nintendojo (1997)
"Sharp graphics, good sound and addictive gameplay make Blast Corps a sure hit though (not to mention the low price of ). The different vehicles keep this game from getting boring -- and flying J-Bomb Pilotwings-style is a real treat. However, I think that there are too many bonus levels and too few real "missile carrier out of control" missions. The shortness of the game and the lack of a true two player mode are the only things that kept this game from dethroning Wave Race or Mario Kart in my list of all-time N64 favorites. But if you're willing to compete for best times in bonus levels, this game seems to offer neverending fun. As it is, Blast Corps can proudly stand up there with the Miyamoto games and it shows Rare's true potential when given an original concept. I'm glad I bought it, and I'll definitely keep it."

1) There are two main methods used in video games to achieve motion blur: cheaper full-screen effects, which typically only take camera movement (and sometimes how fast the camera is moving in 3-D space to create a radial blur), and more "selective" or "per-object" motion blur, which typically uses a shader to create a velocity buffer to mark motion intensity for a motion blurring effect to be applied to or uses a shader to perform geometry extrusion. Motion blur in Blast Corps used for blurry trail when vehicle using the skid attack. Also game has early prototype of bump mapping (on shiny part of the truck). First bump mapping used in Trespasser: Jurassic Park).

2) Blast Corps appears in the book "1001 Video Games You Must Play Before You Die" by General Editor Tony Mott.
3) Blast Corps is a action video game  in which the player uses vehicles to destroy buildings in the path of a runaway nuclear missile carrier. In the game's 57 levels, the player solves puzzles by transferring between vehicles to move objects and bridge gaps.
4) One of the robot vehicles was designed without an arm because the developers had run out of computer memory to store the data and liked the look anyway.
5) Game designer Wakeley saw Blast Corps as a puzzle game at its core. He was influenced by the 1994 Donkey Kong, in which the player begins each level with all the tools they need to finish but must learn how to use them.He was also inspired by the Super Mario 64 demo at the 1995 Space World, which introduced him to the 3D analog stick and spurred him achieve something similar. The team's technical accomplishments included character and environment models composed completely of polygons and the absence of distance fog to obscure the draw distance.
6) It was originally titled Blast Dozer in its 1995 Shoshinkai preview, a name it retained for its Japanese release. (The team had considered other titles, including "Heavy Duty Heroes", "Blast Radius", and "Power Dozer".